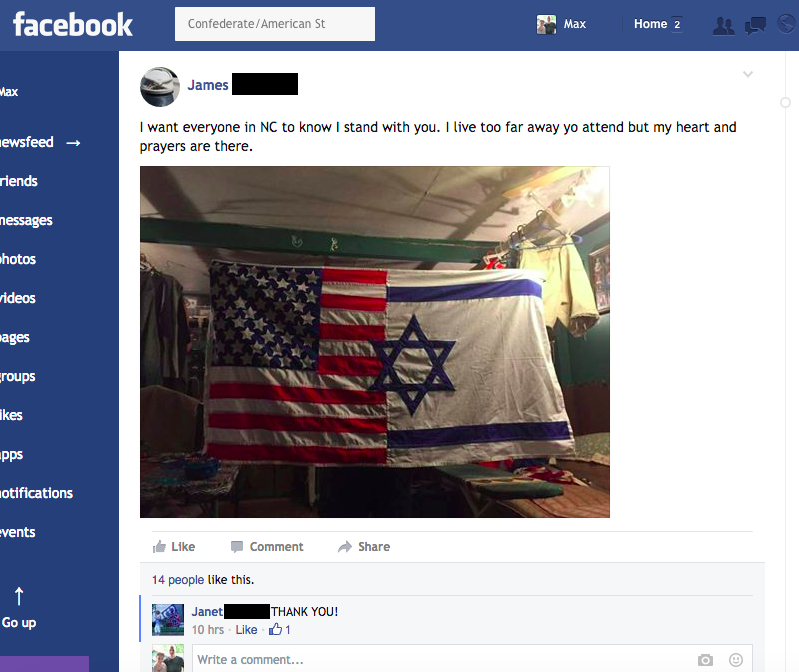 The neo-Confederate/ultra-Zionist convergence is very real

I was genuinely surprised at the reactions to Lex’s short reflection on seeing the Israeli flag fly at a neo-Confederate rally, ranging narrowly as they did from indignation-at-the-very-thought on one end to unjustified-vaguely-paternal-self-assurance on the other. (Also one oddly touching, if also ridiculous, comment from an apparent neo-Confederate, passing our humble Jewish abode like a maudlin, racist ship in the night.)
I left a comment for the doubters on our Facebook page, but it was on the short side, and in thinking it over this deserves a fuller or at least more patient explanation. What Lex saw wasn’t an aberration, and it wasn’t a provocation against Jews (not in the intentional sense, anyway.) It also wasn’t a freak occurrence of Christian Zionism™, as some commenters ventured–as if Christian Zionism were a perplexing natural force, like a red tide or a comet, something that perhaps has an explanation but not one to which we can get ready access.
There’s no reason to doubt the existence of real crossover appeal between the growing neo-Confederate movement and ultra-Zionism, and there shouldn’t even be anything all that surprising about it.
[pullquote] What is it that draws people like this to the Israeli flag?
[/pullquote] So, let’s start over. “Neo-Confederate” is a political identity that lies at the crossroads between the older Confederate heritage movement, white supremacists, white nationalists, the Tea Party, gun enthusiasts, people who spend too much time in more racist parts of the internet, and fringe militia groups like the Oath Keepers. Each of these political identities feeds different individuals and organizations into a loose network of mostly high-school educated white people, many of whom either couldn’t make it in the job market, or saw meager investments wiped out by the recession, or both.
I refer to these folks as “neo” Confederates because any connection, either familial or specifically ideological, to the historical Confederacy is very much an afterthought. These are groups of discontented white people who are feeling the sting of genuine poverty while consuming a lot of cable TV and talk radio. Our active groups here in North Carolina have been documented extensively by citizen journalists, though there is less discussion of them in the wider press. (One interesting aspect of the whole affair, as it has grown, has been the sheepish silence that overtakes many white friends here when the subject comes up; people are ashamed of these groups and what they say about us, and prefer to ignore them. But it’s best not to ignore them.)
So what is it that draws people like this to the Israeli flag, and what is their view, if they have one, of Zionism? Let’s go on a journey together to find out. Click the photos below, in order, to follow along.
I know. Still just some photos. But here are a few things I think I can confidently say. None of the individuals named in these photos is particularly motivated by some kind of fervent Christianity. Many of them, perhaps nearly all of them, will identify themselves as Christians, but this is a marker of social status, not theological commitment. This, I hope, is obvious enough from the context the photos provide, but I will spell it out. America is a country by and for white, Christian people–this is the operating thesis for neo-Confederates. Everyone outside these categories is, at best, a welcome guest, and any non-white or non-Christian group that stands up for its own political interests is absolutely not welcome. Christianity qua Christianity is as relevant to neo-Confederates as the actual historical Confederacy–in other words, not relevant at all. Nietzsche would identify the sum of these views as ressentiment, a mixing-up of actual problems with their perceived causes that is driven by a sense of impotent rage.
As for Israel and Zionism, you’d undoubtedly uncover the same deep ignorance about these concepts if you asked. But that doesn’t mean that these reactionaries are making a mistake when they associate themselves with Israeli symbols.
On the contrary, what should chill American Jews is that, at the end of the day, neo-Confederate sympathies are actually pretty darn consistent. No, they don’t know much about the actual history of the Confederacy, but they are driven primarily by racial ressentiment, which means that Confederate symbols are actually kind of perfect for them. Likewise, they don’t know much about Christianity, but Christianity’s rich history of oppressing and destroying non-white people is, again, a perfect fit. They don’t know much about Israel but they grasp the headline: Israel is the place where tough non-Muslims use totally awesome automatic weapons to kill Muslims. Do these individuals pine for just such an opportunity? You bet they do.

[pullquote align=right] They don’t know much about Israel but they grasp the headline: Israel is the place where tough non-Muslims use totally awesome automatic weapons to kill Muslims. Do these individuals pine for just such an opportunity? You bet they do.
[/pullquote]
Just because that’s not what Israel means to you doesn’t mean these guys are wrong. Outside of the actual threats to our physical safety (despite their Israel fetish, plenty of these folks are wildly anti-Semitic towards Jews living in the US), what should most scare us about neo-Confederates is that they are the American id. They may not understand history or context or politics, but they do somewhat accurately perceive power. They may have deeply misguided moral values, but they do have values, and what little they know about Israel squares comfortably with those values. They often perceive by instinct what we have trouble admitting to ourselves–not regarding the meaning of non-whiteness, about which they know less than nothing, but about the meaning of whiteness.
I could just say to the people complaining about Lex’s post on the basis that they have “nothing in common” with these awful people: you actually do have one thing quite clearly in common, which is that you both fly the Israeli flag, so who’s the real sucker here? But I actually don’t want to be glib. Neo-Confederates are every bit as racist and scary as the growing reactionary movement in Israel. Neither is a laughing matter and both point to deep flaws in our national psychologies and serious structural inequities in our societies. And in both cases, they are not just going to go away. We are going to have to deal with them.
So instead I’ll say the same thing I keep saying to my neighbors here in the South: do pay attention. Do talk about it. Don’t make the mistake of imagining that your ideological commitments and political practices are above this ugliness, because they are not. When you share a view with proud racists, look very hard at that view. You could learn something.