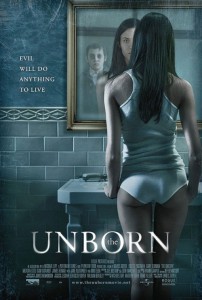 Just saw “The Unborn” on DVD – an unbelievably cheesy horror film about a young woman who is plagued by a dybbuk that has been haunting her family since the Holocaust. OK, I rented this one because my son told me that Gary Oldman played the exorcising rabbi. How am I going to pass that up?
Almost reaches the level of high camp – almost, but not quite. There’s lots of stuff you’ve seen in this kind of thing before (i.e. creepy dreams on dark rainy nights, the heroine prancing around for much of the movie in her underwear.) It also has its share of stuff I assume was meant to be scary, but mainly just left you scratching your head (i.e. an elderly man falls out of his wheelchair, twists his head around 180 degrees, and scuttles like a crab while chasing Jane Alexander through a kind of gothic elder care facility…)
Rabbi Gary Oldman was a bit of a disappointment, but he did figure in the movie’s most hilarious moment: he convenes a sort of interfaith exorcism minyan together with an Episcopal priest/basketball coach, who solemnly describes the exorcism ceremony to the heroine, then asks her to sign a release form before he can proceed…

5 thoughts on “The Unwatchable”