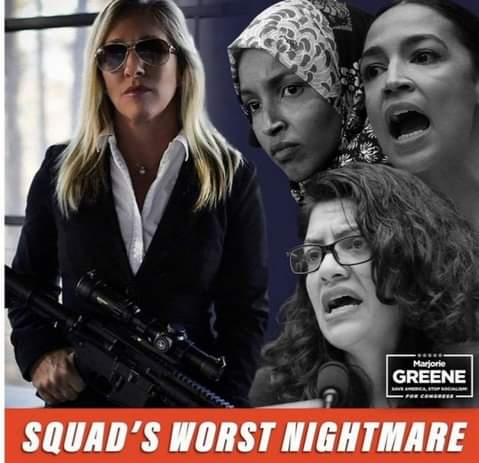 The entire Republican party (minus 11) has voted against any consequences for Greene, who refused to apologize for her insane conspiracy theories (that feed death threats against parents who lost children in Sandy Hook), calls for violence and execution against her colleagues, calls for sedition in regards to the “Election Fraud” coup, and of course her persistent and repeated antisemitic and Islamophobic statements. Persistent and repeated all the way up until now, though she literally blames others for her choices. Apparently admitting 9/11 is the new bar for acceptability.

What can we take from this?

1. The party of “personal responsibility” is once again blaming others for their own choices. Not just Greene but her entire media world — including people like Bethany Mandel (who voted Trump) — blames “the media” and Democrats for their own insane beliefs, words and actions. Greene blamed others literally saying that “I was allowed to believe things that weren’t true.” I was allowed to believe? What? This is on the heals of the entire party echoing the words of Nikki Haley in regard to Trump’s instigating a coup: “Give the guy a break.” Personal responsibility is for the poor and people of color.

2. The Republicans are as much the party of Trump as ever before. If anything, it’s in far deeper now. The antisemitism has grown more front and center as Qanon becomes increasingly mainstreamed. Just two years ago King was stripped of his committee assignments for statements – as racist and antisemitic as they were – were far less so than Greene’s.

3. I am seething – shaking – at the spin that this is a “both sides” issue. Even worse is that I know people propagating it and that Jewish organizations are either not fighting the false equivalency, or else even supporting it. Not just the fascist, hate-mongering so-called “Coalition for Jewish Values,” but mainstream rabbis, Jewish organizations and everyday Jews.

This is an utterly false, and exceedingly dangerous comparison. How so?

First, I will not even dignify deconstructing the comparison to AOC, except to note that if you are advocating “both sides,” the comparison to AOC is part of the coalition you are joining. And, arguably, this connects you to the sickening lies and attacks against her powerful statement of fearing for her life.

Second, regarding Representatives Omar and Tlaib. Yes, they have unnuanced views of Israel/Palestine, and yes they cross the line occasionally and need to be called out. They were raised and live in the universe of Palestinian hasbara parallel to the universe of Israeli/Zionist hasbara in which I and most of my friends were raised. They only learned one narrative that emphasizes Palestinian suffering and de-emphasizes Palestinian culpability and they cross the line sometimes to conflate Israeli and Jew in ways that definitely needs to be called out.

I (and almost every Jew I know) was raised with a similarly one-sided view that hid Israeli crimes (ongoing and getting worse by the day), lied about history, pretended that the Jewish narrative was the only true narrative, denied Palestinian nationhood existed (the flip side is called antisemitic), and engaged in low-level and often not so low-level anti-Arab and anti-Muslim racism. Frankly, most of the people I read calling out Omar and Tlaib still live in that world. I have personally read Heshie Billet, for example, writing such things countless times despite his popular “both sides” facebook post right now. And the ZOA remains a member of the Conference of Presidents.

And note, by the way, that their comments that cross the line are actually built on something. Often the accusations of “antisemitism” are actually against statements of Palestinian advocacy, or statements preferring the Palestinian narrative to the Jewish one (when the reverse is considered acceptable). Even the so-called “dual loyalty” accusation – a phrase Omar never used (!) – needs a lot of thought by Jews who often place an Israeli flag next to their holy Torah, recite a prayer for Israel and its soldiers at the high point of their services, and sing Hatikva at their communal events.

And yet, even though their statements are NOTHING like the insane antisemitic and other conspiracies of Greene, even though they never call for violence against anyone and most especially their own colleagues, they ARE called out, including by their own party! And they even apologize, though not for refusing to accept the Jewish narrative obviously (nor should they). Greene was given a standing ovation.

This notion of parallelism disgusts and enrages me, and I don’t use those words lightly. It is perverse to compare calling Israel racist or blaming them for not vaccinating Palestinians — which may or may not be a fair accusation against a sovereign state — to the antisemitic, racist, insane and above all violent hate-mongering of Greene and Qanon. This is how the Republicans are trying to avoid admitting what they have become, and you are helping them if you feed this narrative.

This “both sides” argument is, incidentally, part of the problem of the IHRA definition of antisemitism, which blurs the distinction between “unfair” criticism of Israel and actual, deadly antisemitism. They are very different. Hence the “Coalition for Jewish Values” notably cited it in arguing explicitly that calling Israel racist is the same as saying – as Greene has done – that there is an international Zionist conspiracy to destroy America and the world. Literally. With George Soros and the Rothschilds at the helm. She is deepening the lies that actually get Jews killed, while stoking the violence to pull the trigger. There is nothing like that on the Left. Literally nothing.

Meanwhile, McCarthy himself LITERALLY posted an election advertisement that pushed this notion of Jewish conspiracy headed by Soros. Trump literally called Jews disloyal and suggested on multiple occasions that they were not fully American, and at his video on January 6 (as analyzed by Jason Stanley) pushed Nazi notions of Jewish globalists destroying America. No apologies by any of them. Just protection, and redirection towards Tlaib, Omar and even AOC.

I could go on, but I’m tearing up now at the state of America and the state of the Jews (pun intended). I’ll close by recommending you watch the video of Steny Hoyer about the violent threat posed to his colleagues, members of Congress, by Greene. Think about the antisemitism she is pushing, as well as the other hate-mongering and violent threats against both specific people and broad categories of Americans. Then ask yourself if you feel like both sides are the same.