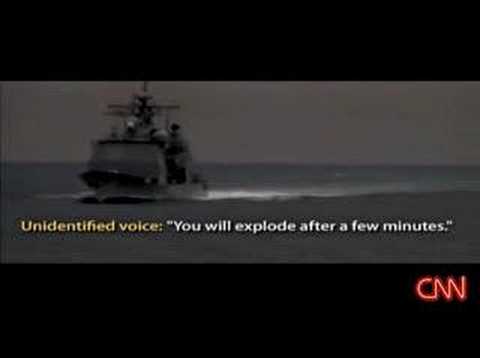 I don’t like this story. I’ll be honest, the last time I wrote about the good guys trying to provoke a war, I was wrong, but I’m still gonna call the US out this time. You’ve all heard the news, a few speed boats irreverently boated around some American warships in the Persian Gulf. I heard that too, and figured it’s another crotchety Iranian thing, trying to test us, find limits, be pricks in general. And, the US played it up. Annoying, dangerous, but typical news.
But then I saw the video and heard the audio track.

Give me a break! I can do a better Persian accent than that. Now, don’t get me wrong. I am willing to trust Uncle Sam enough, and accept that nobody at the DoD cooked up this video, or any of the sound. But, Cmdr. Lydia Robertson, speaking to CNN admits that there is no way to establish that the communication came from those boats. Aside from the accent, if you were bopping around in a little speedboat, you would expect to hear some background noise. You know, those outboard motors are pretty loud, as is the wind. Here’s my guess, some bored sailor, trying to have some fun, was sitting alone somewhere we had a radio set, and well, he got cute.
I can imagine it perfectly, you’re in the middle of a long mission. It’s boring, like always. But, just to make things a bit more annoying this time around, every couple of days, they wake you all up, and make you sit at battle stations again. One time, it’s a strange white thing floating in the water, the next – some unidentified plane. Today, after working your eight hour shift at the radar, keeping an eye on over two hundred fishing boats, you finally get to bed. You lie down blang! goes the klaxon. You’re back to some God forsaken part of that boat (somebody with more naval experience can help me out here) this time because some speed boats are messing around. Why not have a little fun? Unprofessional, yes. Dangerous, yes. Stupid, yes. Exactly the kind of crap a bored serviceman does, yes.
Here’s the rub. I see through this. You know the people on that ship see through this. They didn’t seem particularly threatened or scared when they heard it. The military brass sees through this. Then why the hell are they publishing it? So, you want the video, fine. Then edit out this crap. You don’t have a problem editing other stuff out. For example, I never hear any orders to the crewmen, nor do I hear any officers discussing how to act. That they got rid of. So, get rid of this too.
I guess that’s our America for you. Trying to get a provocation cooked up. Anything that can be done to bring war in our time is good. It seems Bush is still trying to start a war, but instead he’s just looking even dumber.
Update: The Times now has a similar angle, and is covering developments on the story. Aside from bring up the problems that I mentioned, they also have links to Iranian videos of what might be the same incident.

14 thoughts on “Trying to Look Dumb”