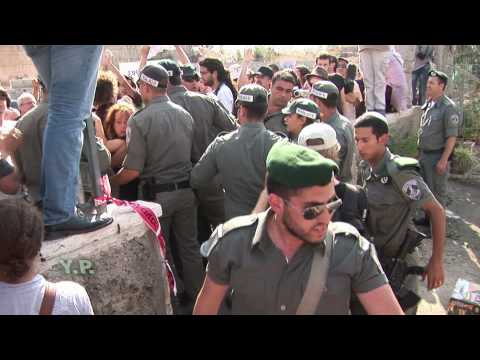 If you had told me three years ago, when I first came to Israel, that I would be spending my Friday afternoons protesting in East Jerusalem, I never would have believed you. If you had told me that the behavior of this country and its residents was going to make it difficult for me to feel comfortable practicing Judaism, I would have believed you even less.
Since I started attending the weekly protests in Sheikh Jarrah, I’ve stopped going to shul on Friday night. In part, it’s logistics – I get home tired and sweaty at 6 or 6:30, and I want a break and a shower before dinner. Partially, though, it’s become uncomfortable for me. There’s something that Emily Schaeffer, an Israeli human rights lawyer who grew up in the Reform community outside of Boston, wrote once, which I increasingly feel in myself:
“Unless I’m with people who I am certain do not espouse Zionism or any form of oppression, I cannot comfortably honor the tradition, or even be sure I want to be part of it.”
Even in my struggle with Judaism itself, the past three years of studying gemara have oriented me toward the world through the lens of text and textual connections. So here’s the gezerah shavah I have to offer:
There is a liturgical similarity between Kabbalat Shabbat and the weekly protest. In L’cha Dodi, the line is “hitoreri, hitoreri, ki va orech kumi ori” – wake up, wake up, for your light has come, arise and shine. In the protest “liturgy,” one of the chants uses the same verb – “ezrachim lehitorer, hafascism kvar over” – residents, wake up, fascism has already passed (it works better in Hebrew).
I’ve been dwelling on those lines as representative of the tension that I’m feeling around typical religious practice (as opposed to, say, Heschel’s praying with his feet). To my mind, those who are awake are fighting for this country – for the rights of all of its residents and against the racism and injustice of its current policies. It feels somehow hypocritical to sit in shul and sing “wake up, wake up,” when I know that most of those around me aren’t going to do so. Some because they’re blinded by ideology, and many because they are only here for a year or so and they don’t put in the time or energy required to figure out what is happening outside of the beit midrash. The fact that Israelis are telling me they fear their country is becoming a military dictatorship would be beyond a shock to them – they wouldn’t have a context in which to place it.
Maybe I’m feeling more like a leftist Israeli. Traveling around this week with Kungfujew and friends, meeting a variety of folks on the Israeli left, and thinking about the relationship between the diaspora left and the Israeli left, I’m beginning to think that maybe at this point I have more in common with Israeli leftists than I do with the community from which I came. I’m drawn to those who devote their lives, day in and day out, to the work of trying to save this country from itself, and I want to help them.
Yesterday, after the border police officer finished shoving me, he said, partially to himself and partially to whomever was listening, “eizeh kef lihyot yehudi” – it’s such fun to be a Jew. I have a teacher who asks constantly what’s holding the Jewish people together, if anything. I certainly don’t see myself as a part of the same project as the kippah-wearing police officer who spends his Friday afternoon behaving violently toward me and the rest of the protesters.
A Palestinian friend of mine has taken to ending his talks to Jewish groups, and to answering the question of “so what should we do?”, by saying emphatically, “be Jewish!” Our community has a tradition of fighting for justice, at least in the US, and not only do I not think that the fight shouldn’t be put aside here, but that all the more so we need to continue to fight to create a Jewish state (whatever that means) of which we can be proud.