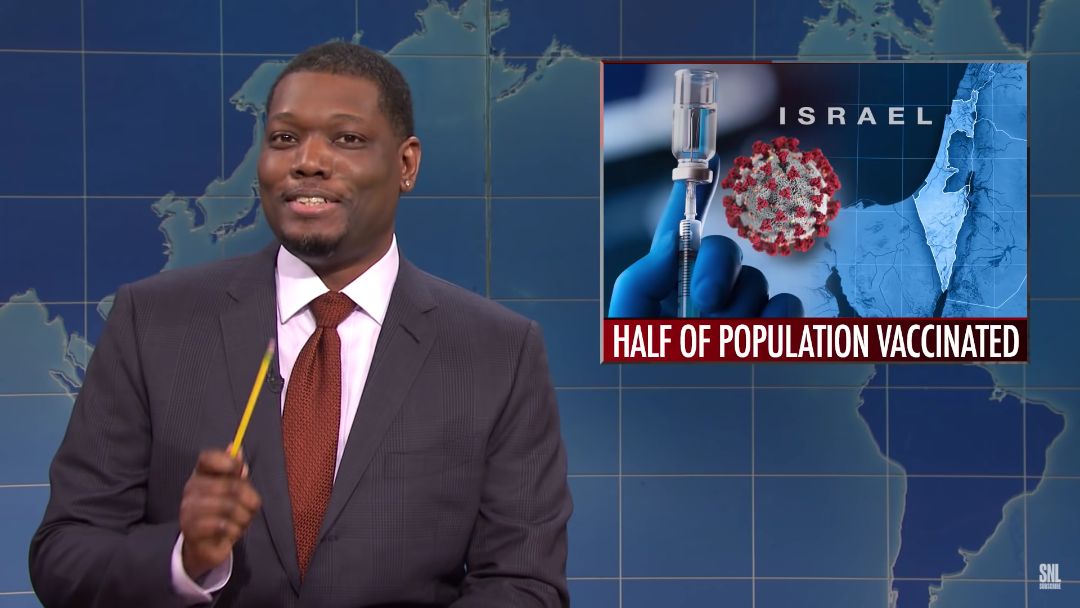 Well, I Thought It Was A Good Joke

The SNL joke was a good one. I didn’t find it that funny, but it turns out to have been an excellent joke. Here’s the deal – a joke’s purpose is not to inform you of information. The set-up was that about half of Israel’s population has been vaccinated, while the punchline was that the half that were vaccinated represented the Jewish half. That punchline is not a true statement, but it doesn’t claim to be. In an earlier joke, in the same segment, Michael Che’s punchline implied that he had experience stealing sneakers. That joke was more offensive than the Israel one, but it’s got nothing to do with the veracity of the punchline. Whether or not Michael Che is a sneaker thief, and whether or not non-Jews in Israel are being vaccinated is not relevant to the joke itself.

The value of jokes is not their factual content, but rather their ability to expose knowledge, emotions, or biases that we otherwise have difficulty speaking about. In the case of the sneaker joke, it was our bias that makes it plausible to us that any given black man, including a successful comedian, could be a shoe thief. The Israel joke, on the other hand, brought out the uncomfortable reality that racism and racial disparity are facts of life in Israel. While plenty of non-Jews have been vaccinated, the unfortunate truth is that among the adult population between the river and the sea, the factor that has the highest correlation to whether or not a person is vaccinated is their religion. Now, whose fault that is, why, and what we should do about it, makes for a great policy debate, but the fact alone should make us, as Jews, uncomfortable. Also, this joke isn’t just about COVID-19. If you look at the same population, and any other number of indicators of social prosperity (wealth, employment, education, life expectancy, infant mortality, etc.…) you will see the same correlation, and that makes us rightly uncomfortable.

That discomfort leads to the defensiveness and anger that has been directed at SNL. Since that joke has forced this conversation to happen and brought out all of that energy in its viewers, it’s clearly good satire. Again, I didn’t find it particularly funny, but the joke worked.

There is case can be made that jokes can strengthen biases rather force us to confront them. You can argue that Che’s shoe stealing joke does just that. But, the Israel joke does not do that. The racial inequality within Israel, and certainly between the river and the sea, is real. On the other hand, there is no factual basis to think that a successful, middle age, black man is more likely a thief than someone of a different race. So, the sneaker joke could be accused of furthering black stereotypes, but the Israel joke could not. The underlying issue, the stereotype if you will of the Israel joke – that there is racial disparity in Israel – is true. It is not wrong, or Anti-Semitic, to call out that truth.

Now, there is also the idea that applying a double standard to Israel may be wrong and Anti-Semitic in and of itself. That again is not an issue here. This joke was clearly in the context of making fun of a number of different groups. If anything, it normalized the Jewish and Israeli experience; the exact opposite of the accusation of double standard.

If you liked the joke, don’t just laugh. Take that energy and join any one of the myriad organizations fighting for equality in Israel. And if you didn’t like the joke, feel free to write an angry letter to Comcast, but when you’re done – join hands with the people who did laugh and fight to fix the problem. Thousands of people, Jewish and Palestinian alike, within Israel and without it are working hard to make the world a better place. Let’s thank the comedians for making us uncomfortable, and then do our part.