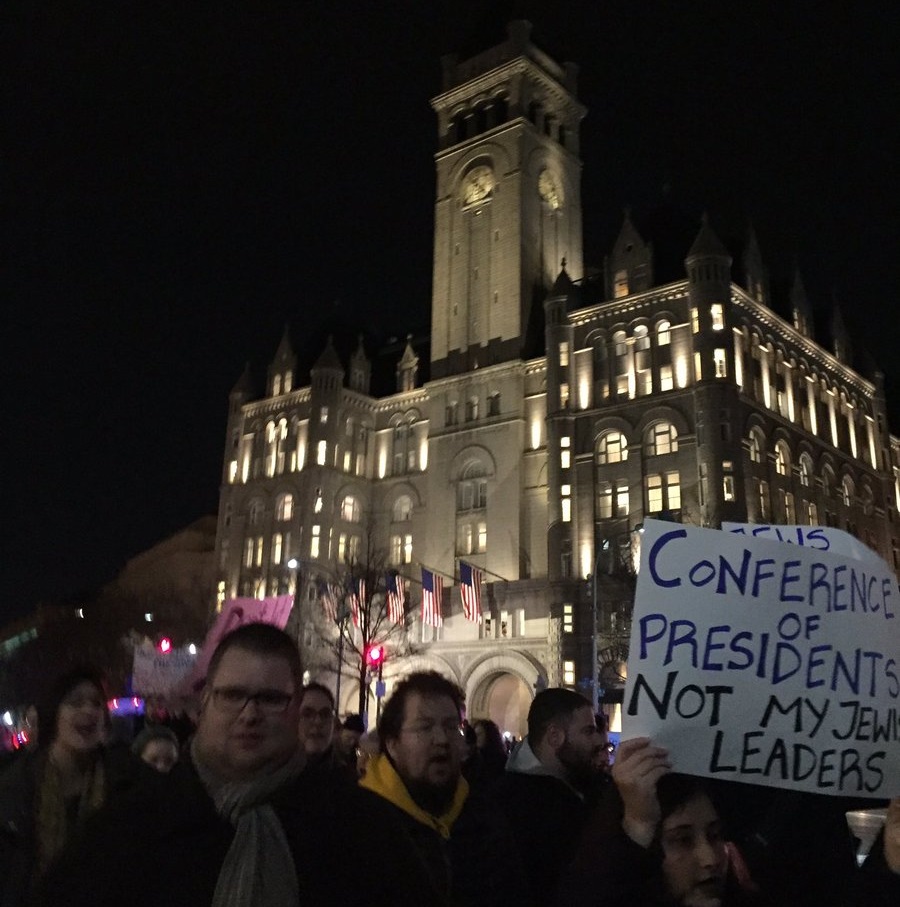 What is the Conference of Presidents anyway?

Yesterday, over 300 young Jews marched to the Trump Hotel in DC, inside which a powerful Jewish organization found itself besieged by Jewish summer camp alumni and abandoned by some of its key institutional members.


But who is the Conference of Presidents anyway?
Its full name is the “Conference of Presidents of Major American Jewish Organizations” and decades ago it was the full-court representation of American Jewry to the American executive branch. In 1956, President Eisenhower asked for one central representative to streamline the many Jewish voices he was hearing — thus the double meaning of “the Presidents’ Conference.”
But since 1956, American Jewry has changed and the Conference largely hasn’t. Some of its members have died out, others are all but inactive, and new institutions are utterly missing from membership. Several have tried to join and failed.

Who does it represent?

Three of the four major Jewish religious denominations are there — Conservative, Reform, and Orthodox movements. But there are multiple representatives from each, typically each’s synagogue association, their rabbis’ association, often their women’s association too, and their Zionist wing as well.


But among Conference members today are groups that are anything but major. A look down its membership roster reveals some eyebrow-raising defunct and peripheral groups. The largest Jewish frat is on there (AEPi), an organization all but shuttered by the Bernie Madoff scandal remains (AJCongress), and even a media watchdog (CAMERA).
It is stacked with right-wing pro-Israel groups: American Friends of Likud, CAMERA, the Zionist Organization of America, Friends of the IDF, the Jewish Institute for National Security Affairs, and of course AIPAC. In the center of the Israel spectrum sit the declining Hadassah and Bnai Brith, alongside the Zionist wings of the Reform, Conservative, and Orthodox movements.
Among its explicitly progressive members are some laudable yet small organizations. The former Labor Zionist Alliance, now called Ameinu, Americans for Peace Now, and the Jewish Labor Committee are venerable and storied organizations, but their voices are pitifully outnumbered.
There are representatives of Sephardi and Russian-speaking Jewry. Add to that a constellation of charitable foundations — World ORT, Amit, Na’amat USA — whose work is admirable but begs the question of why only them.
All in all, many of these players are actually minor, especially on the right-wing of the Israel spectrum.

Umbrellas representing umbrellas to themselves

But wait there’s more.
Possibly the most confusing element of this consensus structure is the interconnected loops of self-self-representation: umbrella groups alongside their member agencies included in wider umbrella groups, which loop back to sit on each other’s boards.
For example, the religious denominations are one of the largest bodies of American Jewry, so they rightfully sit at all the tables. That means they each sit on the Jewish Council of Public Affairs, the policymaking arm of the federation system and ostensibly the legislative mouthpiece of American Jewry. The denominations are also members — through their Zionist branches like ARZA, RZA, MERCAZ — of the American Zionist Movement which is in turn a member agency of the World Zionist Organization. (Think all this is complicated enough? Just wait till you learn about the WZO.) All of these, like nested Russian dolls, are each and every one of them members of the Conference of Presidents.


Furthermore, every member of the Presidents’ Conference also sits on the executive committee of AIPAC, the heavyweight Israel lobby, which is itself a member of the Presidents’ Conference. And the Jewish Council for Public Affairs, an umbrella of 125 local councils, includes the local branches of ADL and AJC at their local level and its national level.
When you think about it, it’s really a mind-bending mobius strip of representation.

Everybody. Here’s just a small list of surprising exclusions from the Conference of Presidents’ membership.
There are no ultra-orthodox institutions, such as the Chabad-Lubavitch or Satmar comunities, despite that their memberships are many times larger than, say, AEPi or Hadassah.
Of the eight members that are also part of the Jewish Social Justice Roundtable, a coalition of 57 social change groups like American Jewish World Service and Avodah, none of them weren’t already on the Conference. That means Hebrew Immigrant Aid Society and the National Council of Jewish Women were already in the Conference, but AJWS, Avodah, Keshet, New Israel Fund and all the other new groups are not. (Really? AEPi is on the conference, but not orgs with a clear advocacy operation like AJWS, Bend the Arc, and Jews United for Justice?)
The Jewish Council of Public Affairs represents 125 local member branches — but has only one vote at the Presidents’ Conference. That means the Conference is grossly under-representing social service agencies like Jewish Family Services, which do the majority of immigrant and refugee resettlement, poverty alleviation, and child welfare work.


Since 1956, Israel politics have gone from a unifying issue to the most divisive one. And yet despite the growth of many pro-peace groups over the years, only one group has been admitted — Americans for Peace Now, added in 1993.
And not for lack of trying: in 2014, the center-left pro-Israel group J Street fought hard for a seat — and failed in a 22-17 vote. If votes were weighted based on the size of member orgs’ constituencies, then J Street would have entered by a landslide: the Reform and Conservative movements, the Anti-Defamation League, and the Jewish Council for Public Affairs all voted in favor. Who voted against? We only partially know, since the vote is always conducted in secret.
We could go on. If one were to start from scratch to rank Jewish organizations by budget, influence, or constituency…you’d have nothing near resembling the confusing, contradictory and sometimes peripheral members of today’s Conference of Presidents.

A consensus agency dominated by the minority

Based on insider accounts, this convoluted and unrepresentative institution doesn’t even follow its own declared principles. Created as a consensus vehicle for the US President, the body has been described as the private soapbox for its head, Malcolm Hoenlein, ever since he took the job over twenty years ago.
An avid settler advocate, Hoenline has served on fundraising committees of the militant settlement of Bet El. Past and present attendees of Conference meetings describe a smiling but nevertheless fierce opponent to Israeli concessions, even under PM Yitzak Rabin’s governance.
And although ostensibly governed by consensus, the loose and vague bylaws have permitted the Conference to issue statements, direct six staff, and conduct foreign diplomacy with barely a majority vote by its hawkishly-dominated members. As long ago as 2002, the then-head of the Reform movement Rabbi Eric Yoffie said openly of the Conference,

“They’re useless,” he maintains. “Many of the small groups are extremely conservative, and that creates an atmosphere at meetings. You try to make points, but nobody’s interested.” Overall, he complains, “We’re rarely consulted on anything.”

But do we really care?

Sorta.
In the aftermath of J Street’s attempt to join in 2014, it was stated by heads of the ADL and Reform movement that the Conference of Presidents had missed a badly-needed shot at relevancy.
ADL’s Abraham Foxman said,

“We will support the admission of J Street not because we agree with them, not because we support their views, but in order to ensure the integrity and credibility of American Jewish advocacy and of the Conference of Presidents.”

“As of yesterday, it is clear that the Conference of Presidents, as currently constituted and governed, no longer serves its vital purpose of providing a collective voice for the entire American Jewish pro-Israel community.”

This week, by the eve of the Conference’s Hankuah party at Trump Hotel DC, eight member organizations had rejected attendance. It was the same liberal names that are always outvoted: the Union of Reform Judaism, the Central Conference of American Rabbis, the National Council of Jewish Women, Americans for Peace Now, Jewish Women International, the Hebrew Immigrant Aid Society, Ameinu, and the Workmen’s Circle.
But there’s a bigger question than who’s at the table. In an age of click-action advocacy, do we need umbrellas of umbrellas of umbrellas to represent Jewish people before government? Do we even need one communal table to sit at? Is it even possible that all American Jews — from ultra-orthodox to social justice sector — could craft any joint asks of the US government?
And yet it exists. And under Hoenlein, it is cozying up to Trump.

A long shot at relevancy

The Conference of Presidents could do many things to revitalize its relevancy and accurately represent American Jewry. To do so, it must include the ascendant institutions of modern Jewish life. It must replace its aged, tone deaf and 99% male leadership. And must somehow weight its members’ votes by size of their institution.
But doing anything that will end it’s powerful use for its pro-settlement head and right-wing inner circle is unlikely. Especially since Trump’s pick for US Ambassador to Israel is the president of American Friends of Bet El.
So instead it could also simply pass away with a minor of fuss, if major players like the Reform movement, HIAS, ADL and others just withdraw and deny it legitimacy. Alternative coalitions representing more vibrant and like-minded groupings along ideological lines will no longer be silenced by disingenuous consensus gimmicks.
And young Jews with groups like IfNotNow can protest the Conference’s sycophantic behavior towards the Trump administration and pointedly deny its morally-compromised monopoly on Jewish representation.
[Corrections: Earlier versions of this article incorrectly said that J Street attempted to join in 2012 (it was 2014). An earlier version also listed incorrectly that the Reconstructionist movement is included in the Conference of Presidents; they did join in 1971 and the RRC still claims membership on their website, although they are not listed on the Conference’s website. If you have a correction, please send an email to [email protected].]

One thought on “What is the Conference of Presidents anyway?”