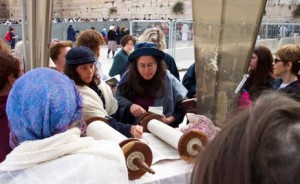 Woman Arrested For Wearing Tallit at the Kotel

Nofrat Frenkel, a medical student from Beersheva, was arrested for wearing a tallit at a gathering of Women of the Wall at the Kotel (Western Wall) today. (That’s not a picture of her–that’s some other folks from Women of the Wall.)
Here are the Haaretz and JTA reports.
The stam (anonymous voice) of Menachot 43a tells us that “Everyone is obligated in tzitzit–Priests, Levites and Israelites, converts, women and minors.” The Rambam tells us that if women want to wrap themselves in tzitzit, we do not protest. The Shulchan Aruch says that women and slaves are exempt from tzitzit, and the commentator the Rema says that, nevertheless, if they wish to wrap themselves and say the blessing, it is permissible as with all positive time-bound commandments. R. Moshe Feinstein says that “women are permitted to perform even mitzvot from which they are exempt by the Torah, and they get a mitzvah and a reward upon performing them…. and if so, also regarding tzitzit it is appropriate for a woman who wants to wear a garment that is different from a man’s clothing but has four corners, that she put on tzitzit and fulfill this mitzvah.”
The theocracy in Israel is not about the love of and service to God.

27 thoughts on “Woman Arrested For Wearing Tallit at the Kotel”