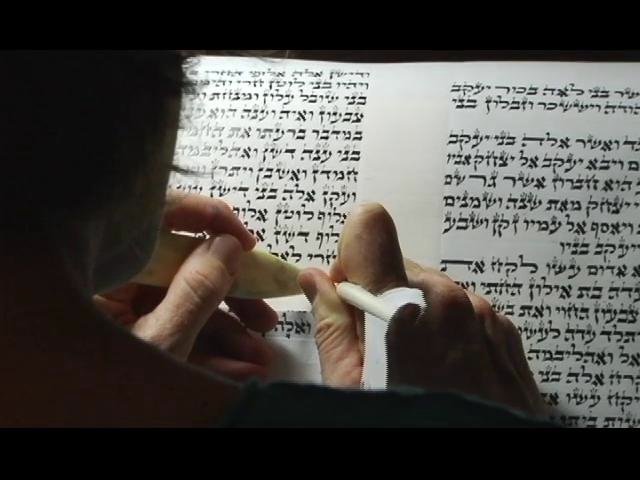 Filmmaker Sasha Perry recently traveled to Seattle to document a historic event: the completion of the first Torah scroll written by women scribes to be commissioned.


There’s a bit of history that you need to know to clarify the situation. Kadima, a Jewish community in Washington, wanted to buy a Torah written by a woman. After making inquiries, they learned that there were no Torahs written by women. So they decided to commission six women to write one.
Since the time that this Torah was commissioned, in 2003, several women have become Torah scribes (or sofrot) is and completed the writing of a Torah on their own. (In fact, one of those is Julie Seltzer, an MJL writer who bakes a different challah for every Torah portion {here’s this week’s — not that it has anything to do with the movie; it’s just independently cool}.)
Perry explains a bit of the background:

Since the time the Women’s Torah Project began, nearly 50 women have become Torah scribes, and one woman, Jen Taylor Friedman, has written 3 sefer Torahs by herself.  Not only has Kadima created a beautiful Torah for their community, they have also opened doors for women to take their places in Judaism one step further.

Now that the community has this Torah, what are they going to do with it? The next step is, of course, decorating it — other women from the community are already starting to work on the crown, mantle and yad. But really, the next big step is Shabbat — like any other Torah, they’re going to read the eternal story of our people’s history each week.
Crossposted from Mixed Multitudes.