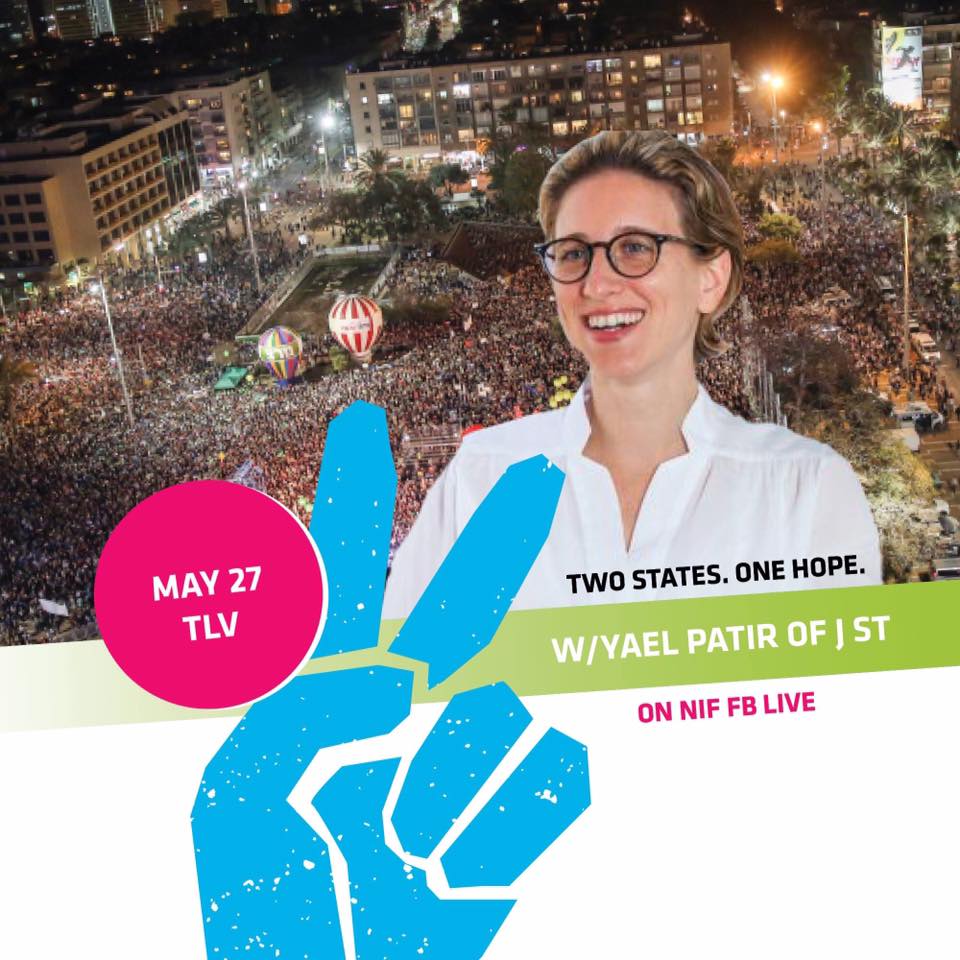 Yael Patir on Traversing Bridges between Israelis and Americans in Peacemaking

Patir was born in Tel Aviv to a liberal Zionist family. Three of her grandparents were Holocaust survivors. Her grandmother often shared with her the lesson that one’s lot in life is “all a matter of luck, not anything else.” The close relationship Patir had with her grandmother helped inspire her staunch commitment to fight against injustice for those who suffer through no fault of their own.
Although her parents were not activists, they were sympathetic to the peace movement. At age fifteen, Patir tagged along with her older brother to the November 4, 1995 peace demonstration at which Prime Minister Yitzhak Rabin was assassinated. At a time when the Israeli electorate was bitterly divided, she recalls: “We took with us a big Israeli flag, because we wanted to make a statement that we were as patriotic and Israeli-loving as anybody else despite… [supporting] this peace process.” The experience of Rabin’s assassination was indelibly inscribed in her memory.
Similar to young American Jews from liberal backgrounds, it wasn’t until she attended the university that Patir began to really learn “all these things that nobody told” her about the conflict.

There were all these moments of feeling they lied to me. They didn’t tell me that there was military rule in Israel for many, many years. We all studied the wars, but where is the West Bank?  Where does it start? Where does it end? Who lives there? What does their life look like? Where are the settlements? All these issues were totally behind a veil – and that really made me want to study more.

Patir majored in political science and sociology, focusing her academic research on the conflict. In the course of her studies, she met Ron Pundak, then director of Shimon Peres Center for Peace, who hired her after she graduated in 2006. She recalled: “That’s how I started my professional life in what we call in Israel, sarcastically, the peace industry.” In 2012, Patir left her position as director of the Civil Society Leadership Department at the Peres Center to become the director of J Street Israel, where she remains to this day.
In the interview, Patir lamented a divided Israeli peace movement. On the one hand,  there is the traditional peace camp, which “at its heart comes from a very Zionist, security-based perspective fighting for the Jewish and democratic state” and, on the other hand, there are human rights groups such as B’Tselem or Yesh Din that are arguably the most prominent international voice of the Israeli movement in the present time. Older American Jews, she believes, have been a great asset to the Israeli peace movement both as donors and as activists on the ground. Patir remarked: “When I stepped into this world I was surprised and amazed by the number of people who are American by origin and their dominance.” However, she noted wistfully the dearth of young Americans in the traditional Zionist peace camp.

American Jews, Patir noticed, have also had a significant cultural influence on the values of the peace movement. For example, she noted that Breaking the Silence leaders Avner Gvaryahu, Mikhael Manekin, and Yehuda Shaul were born to religious American parents who made aliyah. “The ability to hold your Jewishness as a religious practice, and on the other hand be very liberal and progressive is very much a U.S. phenomena,” since religious communities within Israel tend to be more conservative.
Patir is critical of the way human rights groups have de-politicized the Israeli peace movement; they, for the most part, do not advocate for a position on the resolution of the conflict. Similarly, many Americans in the peace movement have adopted a human rights perspective on the conflict without endorsing a particular solution, viewing their main role as “fighting for the oppressed.” Patir believes that this type of positioning side-steps the importance of developing of a political strategy to achieve what will inevitably have to be a political resolution of the conflict.
Patir had specific advice when asked about what she wished Americans understood better about Israel.

[Israel is] not a project. It’s not a concept. It’s a real place. It’s a real [country] that struggles with a lot of issues like any other state. It’s unique in the sense that other states in the world don’t occupy millions of people, but it is also just a state. I feel that for a lot of Americans Israel is an ideal. It’s something to struggle with, to be in conversation about in a way that has to do with your identity. For me it’s a state and if we want to change it then it’s a matter of political power and less a matter of theorizing about it or conceptualizing about it.

Patir emphasized the importance of engaging in ongoing study about the continually changing situation for both Israelis and Palestinians. She relayed this with empathy for young American Jews who may be “fed up of being ‘educated’ about Israel.” After all, this was “the generation that got the most advanced education about Israel and the hasbara talking points.”

She also affirmed the right of young American Jews to be involved in the conflict “because of their Jewish values or because this is the homeland of the Jewish people that gives them a birthright.”

The practical reality is…that the Jewish community all around the world, and particularly in the US, were fundamental in creating this place. They’re invested in it. They’re stakeholders. The success of Israel, it’s ability to overcome wars, its ability to build the most advanced army in the world is a result of the relationship with the U.S., that is a result of the investment of the Jewish community in that relationship.  So…of course, it’s your or their [right] to be involved…

Engage with Israelis, she reiterated, “even when you come in solidarity with the Palestinians and…you just want to come and place your body within the occupation to protect Palestinians.”

Patir’s observations are a helpful reminder that our socialization as American Jews has an impact on the lens through which we understand the Israeli-Palestinian conflict and its resolution. Hopefully Patir’s efforts to begin to unpack this influence will initiate a dialogue that can help us Americans be more effective allies to both Israelis and Palestinians in bringing peace and justice to this part of the world.
This is the seventh in the American Jewish Peace Archive series of profiles of Israeli peace activists, based on interviews about the relationship between American Jewish and Israeli peace activism. Previous pieces are listed below.
Sarai Aharoni on Feminism and Peace Activism in Israel and the Diaspora
Putting out Fires: An Interview with Israeli Human Rights Lawyer Nery Ramati
Anat Saragusti on Women Wage Peace
Hillel Ben Sasson on Progressive Leadership and Jewish Identity in Israel and the Diaspora
Karen Isaacs on her Journey to Achvat Amim (Solidarity of Nations)
Israelis Rising Up:  Remembering with Yuli Tamir and Janet Aviad