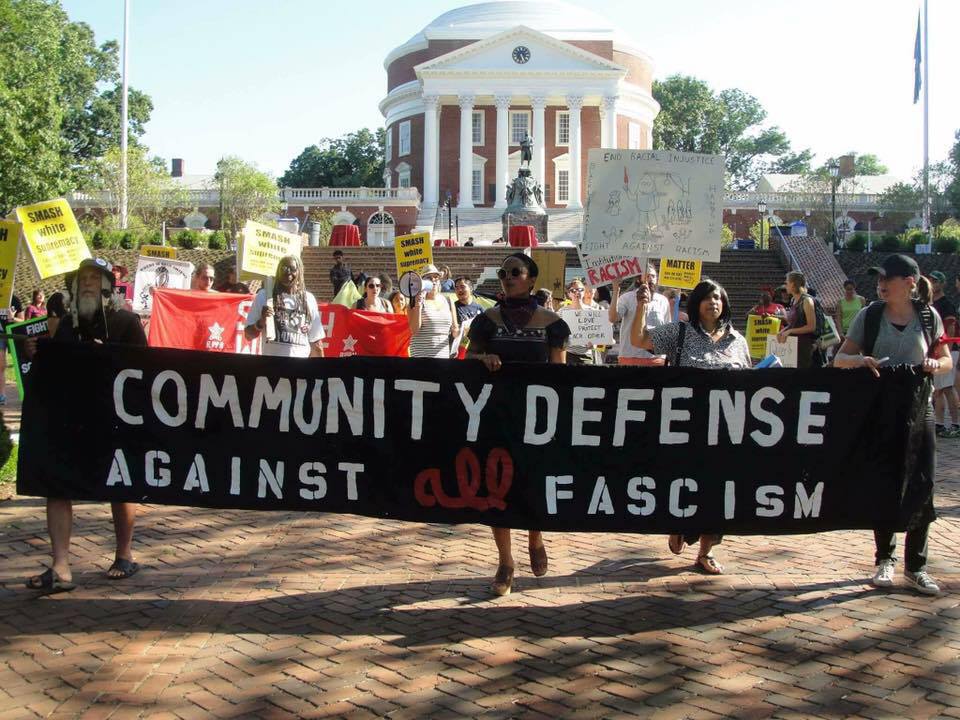 This year, we fight Nazis.
We don’t do it because it’s fun. We don’t do it because it makes us money, or even builds our credentials. We don’t do it for networking.
We do it out of love, we do it because it is a moral imperative, and we do it for survival.
My beloved Jews, here is my love letter to you this New Year.
I am a White queer femme Jew in Charlottesville. Although many friends in Boston and NYC thought I had moved to Charlotte, North Carolina, by now I hope you’ve heard of Charlottesville. We’re in the mountains of Central Virginia, a small city of 50,000 people, founded by the racist rapist colonizer Thomas Jefferson, with the University of Virginia two miles from downtown.
The Nazis chose Charlottesville. There have been Nazis (with guns) in Charlottesville since long before I got here, harassing Black politicians and intimidating anti-racist protesters and also planning amongst themselves. The friendly liberal White folks who populate this space know who they are – will talk about them and roll their eyes and make fun of them – but it has taken persistent, daring, fierce leadership by anti-fascist and anarchist people of color (primarily women and femmes) to teach Charlottesville how to fight Nazis. Everything I share with you in this piece, I learned from them. Except for the Jewish parts – those I learned from you! And our powers combined, we can do this. I believe that we will win. But first, we have to fight.
Here’s how.

Find anti-fascist Black and indigenous people who have been doing the work from so many directions to address systems of colonization and anti-Blackness in this country. Believe them when they tell you what to do. Support them with everything you’ve got. One of the most serious mistakes I made this summer was falling into that Whiteness trap of Thinking I Know Best – assuming that I can talk to other White people to figure out what the hell is going on and what my role in all of it is. Here’s a great way to make sure you’re talking through things with and asking questions of and offering support to and really getting to know people who aren’t just White Jews: make Friends. That’s right, I capitalized Friends. People I eat with, drink with, dance with, call, text, visit, hug, appreciate, and ask many questions on a regular basis. It’s irreplaceable. Make friends with anti-fascists who have been confronting, disrupting, and undermining Nazis for years or even decades. You may also hear them called “antifa.” Everything I know from fighting Nazis this summer, I learned from local anti-fascist, anarchist, and anti-racist leadership. This includes Jews of color! There are Black Jews and Latinx Jews and other Jews who face very specific threats to existence and presence in this country. Trust them; build trust with them.

Jews should be fighting Nazis. And — at the same time — we White-presenting White-privileged Jews need to understand that we are fighting Nazis in the US within the very real context of centuries of anti-Black racism. I have been face to face with Nazis and yes I see the swastikas and I see the anti-semitic signs and I hear the taunts and I respect the fear of the synagogue in downtown Charlottesville — AND please believe me when I say that they are coming for Black people first. It is Black people who the Nazis are seeking out, Black neighborhoods that are being targeted, anti-Black terrorism that is being perpetrated. So. Jews need to be fighting Nazis in this moment. And. At the same time. If we are fighting Nazis expecting them to look like German anti-Semitic prototypes, we will be betraying ourselves and our comrades of color. We need to fight Nazis in the US within the context of US anti-Black racism. We need to be anti-fascist and anti-racist with every breath, with every step. Our anti-fascism must affirm that Black Lives Matter and must support the Movement for Black Lives.

Antifa refer to this tactic as “no platforming.” Remember that “freedom of speech” may restrict (somewhat) the actions of the government, but it does not restrict our actions as individuals. The goal of no platforming is to stop the spread of Nazi propaganda. I remember the Hebrew School lessons about how much the German Nazis used media – speeches, posters, propaganda – to fuel anti-Semitism and normalize the escalation of state violence. Do not allow Nazis to make speeches. Do not allow Nazis to have press conferences, radio interviews, and rallies. No dialogue with White Supremacy. No platform.

No platforming does NOT mean hide your head in the sand and ignore them. Quite the opposite. We must know who they are. As Charlottesville organizers have already instructed: “Do the research to identify Nazis in your community. Find out who’s doing alt-right or white supremacist agitating, find out where they work, and learn as much as you can about their connections to politicians or police in your town. Use this information to block them from gaining social and political control.”

After Richard Spencer’s first Charlottesville terrorist torch rally in May, local anarchist people of color hosted a community vigil and had us chant together Assata Shakur’s prayer: “It is our duty to fight. It is our duty to win. We must love each other and protect each other. We have nothing to lose but our chains.” Loving each other and protecting each other have been core values of the resistance in Charlottesville: community care and community defense. Do folks need food, groceries, a ride, housing? We have to pay attention to and prioritize the most marginalized among us. No one is too much; no one is disposable. These needs are valid. The need for protection is also valid. Community defense – physical defense – is part of this love. We must protect each other from the White Supremacist violence of Nazis and from state violence. Consider bringing a nonviolent direct action training to your community or congregation. And know that antifa saved lives through community defense in Charlottesville on August 12. Saved. Lives. We must protect each other; we must defend our communities.

Again, individuals willing to get physically confrontational saved lives in Charlottesville. We must stop the Nazis. The use of physical confrontation caused some mainstream media outlets to proclaim a false equivalency, which we must refute and refuse. I want to learn more about the legacy of Jewish militia who fought Nazis — in Europe and in America. Charlottesville’s own Veronica Fitzhugh tells us to bring our best gifts to this struggle. Push yourself to find the strength you bring to this moment, and consider how you will know when you are ready to escalate, and what you will do when that time comes. In the meantime, respect and root for individuals who are willing to take risks that you are not yet ready to take.

Jews should be fighting Nazis, but we do not need to be fighting Nazis alone. Coalition-building is really hard. Maybe folks from Solidarity Cville will write publicly one day about what we did and what we failed to do this summer… coalition conflict led to many hours of me crying on my couch alone… which is not necessarily the most strategic move, in retrospect. Other people were hurt much more than I was. Check out the St. Paul’s Principles of Unity. Make friends with each other. Always have food at meetings. Don’t assume you always need a meeting in order to get things done. Center Black lives. Honor the emotional labor of women and femmes. Mess up, be accountable, reconnect, and try again. We are in this together.

We need courageous Jewish leadership to spearhead a Jewish response to the rising reality of Nazi violence and the threat of American fascism. I called six national Jewish organizations in July, begging for help fighting Nazis in Charlottesville. I got mixed responses; no one seemed to know whose responsibility it was to lead this work. Shout out to T’ruah and If Not Now for your statements of solidarity, and for showing up on August 12. We need many different forms of leadership in this moment. We also need the core Jewish movements themselves – looking at you, URJ and USCJ – to declare resistance to White Supremacy, paving the way for congregational rabbis to do the same. National leadership supports local leadership, and vice versa.

Support communities facing crisis. When you’re called for help, take it seriously and figure out how to give it. Having better prepared national Jewish leadership will help with this – particularly by having one (or several) Jewish organizations committed to sending people, educational materials, and money to communities under attack. And by “communities” I mean not just Jewish communities – Black predominantly Christian communities, Muslim communities, and entire city communities like Charlottesville. The best way to help is to go there in person. Send money, declare solidarity, signal boost. Build up the skills and resources within your congregation or, even better, within your local coalition so that you are ready to go when needed.

This. Is. Not. Normal. Never let it be normal. I am not trying to “get back to normal” after August 12. Also? Refuse to normalize White Supremacy in retrospect. Don’t romanticize the Obama era, when deportations and police brutality and mass incarceration continued to escalate. That all wasn’t normal either, and it was never okay. Don’t normalize fascism and don’t normalize racism, even the parts that have been here all along.

What does this have to do with the High Holidays? I call on Jewish leadership – clergy and lay leaders – to apply the ten steps above to the traditions of Rosh Hashanah, Yom Kippur, and the Days of Awe. Use the High Holidays to prepare for a year of fighting Nazis.
Our resistance must start with repentance. Only through acknowledgement and accountability can we strive for reparations. With rituals such as tashlict and al chet, we can reflect on how we even got to this place, what our own complicity in White Supremacy has been, and how we have or have not been showing up for people whose bodies are on the line.
And then comes actual interpersonal apologies and accountability. This time, I need you all to get specific. Who have you harmed, through racism, sexism, or unjust criticism? Who have you turned away in their moment of need? We need each other. We must bind together even as we challenge each other to do way better. We need honest conversations that build closeness and community. We are in it together. Get involved.
Finally, to truly show up for each other and persist in resistance, we must embrace a sweet new year. Fighting Nazis makes me sick. I remember when I started feeling sick in May, after just a few weeks of shouting at Nazis in the streets. Physically ill and shaking and angry and scared. We are confronting rather than avoiding the grossness of the world. So seek out moments of sweetness, be all-out affectionate with your comrades and community members, and wish each other joy in whatever ways feel possible.
Because we must fight. We don’t fight for fun; we don’t fight for joy. We fight for love and freedom and liberation. We fight because we are Jews. Jews fight Nazis.