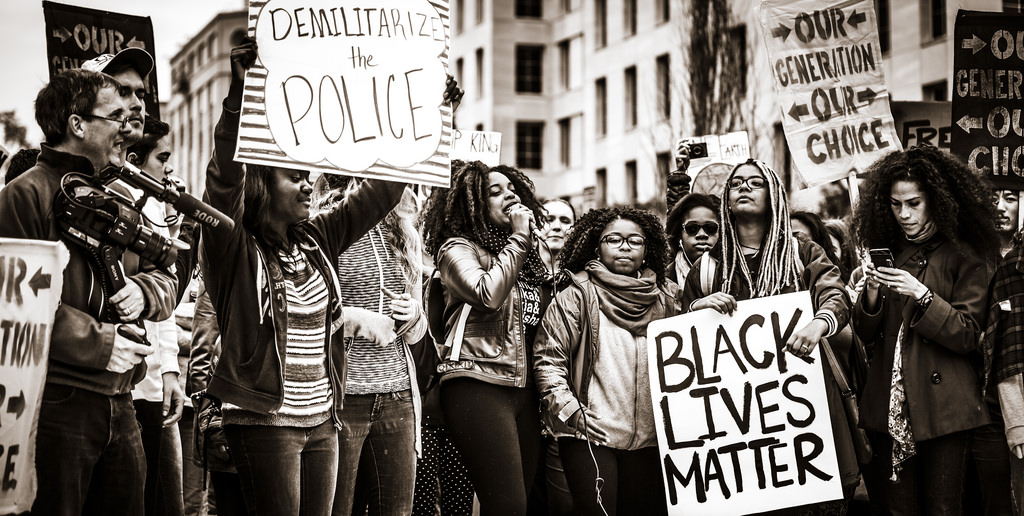 This piece of #TorahForTheResistance is part of a campaign by young rabbinical students, Rabbis, and religious students about Jewish resistance to Trump through the lens of faith, Judaism, and spirituality. Read the full series here.

Charlottesville and the rise of White Nationalism in US brought, once again, to the national consciousness the fact that our country still has much teshuva to do for the sin of racism. Since 2014 Black Lives Matter has been helping us do this teshuva in ways that are underappreciated by the vast majority of society. Of all the tactics employed by Black Lives Matter and the Movement for Black Lives, the disruption of daily life of people far from the experience of police violence drew the most criticism. In the wake of the death of Michael Brown activists from Ferguson, MO disrupted conversations in Starbucks, performances in the concert hall and commuters on the way to work. Many white, middle and upper-middle class targets of these actions responded with annoyance and rage. “What right do these people have to invade my life? I paid good money for these tickets to the symphony!” But it is this very tactic that offers the white majority a shot at Teshuva.

Disruption makes a radical statement that despite massive socio-economic differences all of us are connected.

Let’s take St. Louis as an example. Ferguson, which became ground zero for Black Lives Matter in the summer of 2014 is a small municipality just outside of predominantly African-American North St. Louis. Like many similar areas around the country, there is no particular reason to go to Ferguson unless you live there. The community is so under-resourced that the public schools were de-accredited and students were forced to be bussed to schools in other municipalities. A DOJ report proved that the police department and courts balance their budgets on the backs of the black community. The threat of police violence is ever-present.
When protesters from Ferguson entered Starbucks in the “Loop” commercial area of St. Louis en masse or stood up and chanted during a symphony concert they were saying, “what happens to us in our forgotten, invisible, predominantly black suburb is connected to you, upper-middle class white person. It may seem like your life has nothing to do with ours, but that is an illusion.” Certainly, rage is one aspect of disruption and the disrupters are letting the disrupted know how angry they are. But that is not the goal or the main motivation for the tactic. Disruption is about ending the illusion that we live disconnected lives and making visible the reality that oppression of one is oppression of all.
How is this an opportunity to do teshuva for racism? Racism is the ideology that lighter skinned people are inherently superior to darker skinned people. It is an ideology used to divide groups from each other and support economic exploitation by the most powerful elements in society. There is nothing inherent about racism. It is a learned belief and infects everyone. It makes us think there is something essentially different about one group of people from another and ultimately damages our ability to have the warm, nurturing relationships with all types of people, which is our human birthright. It also leads to the actual economic and physical mistreatment of people with dark skin, resulting in higher infant mortality rates, shorter life spans and lower incomes. Racism ruins our lives.

Teshuva, the focus of these days in the Jewish calendar, can be seen as a three-part process. According to Rabbi Nachman of Breslov (19th century, Ukraine), acknowledging reality, despite feeling embarrassed or ashamed, is the first stage. Acknowledging the reality of our behavior or beliefs can be a painful experience that forces us to grieve and feel other hard, yet important feelings. Rabbi Yisrael Salanter (d. 1883) refers to this stage as “Sensitivity” and adds two more stages. Next is using willpower to decide to stop or start certain behaviors you’ve now become aware of through acknowledgement. His final, and most exalted stage is Tikkun, or transformation. You make Tikkun by deeply feeling a sense of joy and love in service of your highest self, others and God. The key to tikkun is identifying how something true about ourselves was hidden by whatever it was we wouldn’t acknowledge and now is ready to emerge. It is a joyous thing to live in integrity with our deepest values.

Let’s apply this Teshuva process to racism. Do we really acknowledge the reality of racism and how it destroys people’s lives? Do we acknowledge the reality of what it is like to be a young black male teenager in the US today? Do we acknowledge how racism keeps white people feeling separate from each other and all people of the global majority and thus diminishes their lives? Disruption forces people to acknowledge that we are all connected and interdependent. Ferguson and the upscale Central West End of St. Louis are part of one continuum, mutually impacting each other. Once we acknowledge interdependence and connection, what do we need to start or stop doing, feeling and/or thinking? These are hard questions, but if we can really acknowledge our interdependence the answers will become clearer. They could include proactively building more multi-racial relationships or watching different shows or stopping saying certain things. They could include fighting to end all forms of mistreatment of people of African heritage. Tikkun calls on us to feel how joyous it is to live in integrity and work to build a just, multi-racial society as well as have meaningful, deep relationships with all people, including people from different backgrounds.
With racial justice back on the national front-burner, let us use this high holiday Teshuva period to do the important inner and outer work of dismantling racism in our hearts so we can dismantle the racist systems that keep so many people down and keep us all far from being whole.