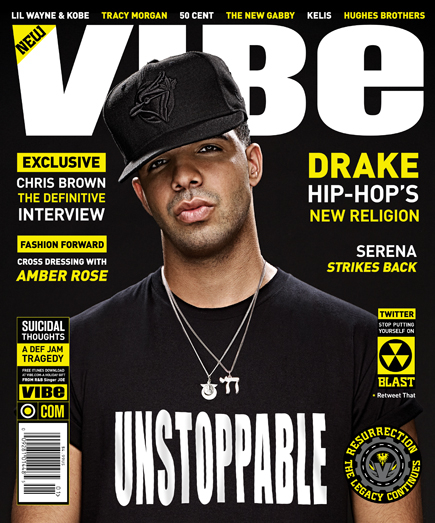 Everyone and your fossilizing bubbe could tell you that Drake, the raucously popular pop-rapper, is “half-Jewish.” Born to a African-American father and Jewish mother in 1986, Drake grew up in a wealthy Jewish neighborhood in Toronto, attended a Jewish Day School and celebrated his Bar Mitzve. Now he’s at the pinnacle of hip-hop stardom, and his lyrical glosses on Jewishness are blaring. Take for example:

I mean, he did grow up in the predominantly wealthy Jewish Forest Hill neighborhood in Toronto, and now he is umbilically linked with Lil-Wayne, who is currently serving a sentence at Rikers Island for weapons possession. That would confuse me dearly, too.
…And so you might expect a load of hip-hop wise-men analyzing Drake’s pilgrimage from a privileged, multi-racial Jewish child in Canada to a hip-hop entertainer reaping the fruits of America’s urban, black pop-star landscape.
But, surprisingly, Drake himself seems to be the only one not tip-toeing around the issue. In an interview with Heeb, Drake reflects on growing up in the Canadian Jewish mix:

I went to a Jewish school, where nobody understood what it was like to be black and Jewish,” he says. “When kids are young it’s hard for them to understand the make-up of religion and race.” He recalls being called a schvartze, repeatedly. “But the same kids that made fun of me are super proud [of me] now. And they act as if nothing happened.” He wears a diamond-studded Chai (prominently displayed on his Vibe cover) and plans, at some point after the release and promotion of his debut, to travel to Israel. He says his mother has expressed hope he’ll marry “a nice Jewish girl.” As far as public acceptance goes today, by all accounts, religion has been a complete non-issue.

Yet, Thomas Chatterton Williams at The Root dismisses the whole issue:

In a recent profile in Heeb magazine — Drake is Jewish on his mother’s side — Drake himself identifies astutely, if unwittingly, one of the main weaknesses of the album: ” ‘The internet has f**ked the game up so bad, that if I don’t [sell a lot of records], I’m curious to sit back and watch whoever does … I honestly can say, the steps we’ve taken, the way that how passionate we are about this … ‘ He trails off..

So I’ll make a claim The Root dismisses: Drake’s Jewishness is central to understanding his rise, his fame, his appeal and his success. Is he the Moses Mendelssohn of Hip-Hop? Is he translating contemporary Jewishness into a marketable hip-hop vernacular and suggesting a conversation about race and Jewish culture? Or does he just want to celebrate human brotherhood? Will his children convert to Christianity?
Only G-d knows.