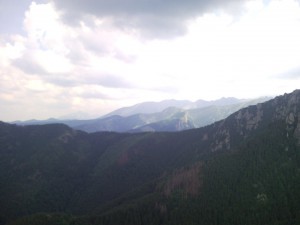 July 16, 2010May 4, 2018 by eli rosenblatt
It’s been exactly one week since my return to California. I was in Warsaw, Krakow and some small villages near Nowy Targ, in the heart of Polish Galicia. It has been a whirlwind of air travel and rugaluch for all three meals. When I sat at a café table here the other day with a friend who moved out of Brooklyn frum aristocracy to northern California, I got an earful. When I spoke of the Polish Jewish communities that welcomed me for Shabbosim, he said “They might as well be dead to me. There is nothing there but antisemites and martyrs in that country.”
Indeed, the members of the only shul in Warsaw are keenly aware of these types of things. They admit that there is a superstition that basically puports they don’t really exist. “We know that most Jews come here to visit gravestones. American and Israeli Jews have somehow invested in the persecution and genocide that happened here. The byproduct of that is that we’re sometimes ignored.”
The Polish Jewish community is supported by a few foundations you may have heard of: Taube/Koret, Lauder and The Joint. These baaley-chesed are the plaques and the symbols. But the kind of dynamic examples of Jewish creativity in Poland, they are here in full force, operating underneath Zionist assumptions about the very essence of Jewish history. The Jewish Culture Festival in Krakow may seem like a minstrel show, but the few Polish and Western Jews who hang around it are just as troubled as you are about that. In Poland, us Jews can feel like Sitting Bull at a sideshow. You can also meet political and cultural activists wearing tzitzis running out a café for mincha. Of course, this person, raised Catholic, may have ‘discovered’ that their grandfather was a Jew and their going a little overboard with the mitzvos. It’s a special community no doubt, but with all that’s going on in Poyln, and all that’s being fought over in ideological and political battles about the identity of the Jews in Tel Aviv and New York, it is definitely among the most unafraid communities I’ve ever experienced. Shacharis is at 7:15, the hospitality is sweet and the history is pretty damn complex.
More to come, working on gathering some things. AGitShabbuhhhhs.