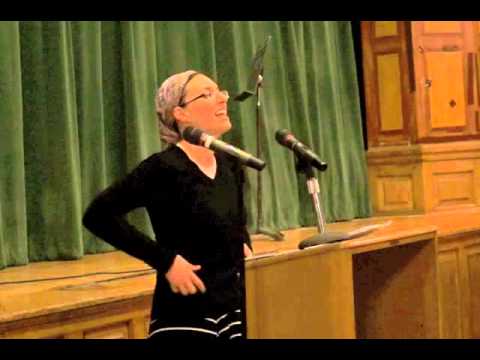 A couple of weeks ago, an email came over the Jewschool contributors’ listserv asking if anyone wanted to cover a SermonSlam taking place in my neighborhood. As someone who has enjoyed other kinds of slams in the past (poetry, story, and grand – IHOP, not baseball), I jumped at the opportunity. I’m still something of a Brooklyn newbie, having lived here for less than a year. So I want to fully own that my preconceived notions of what a SermonSlam might be were entirely colored by an outsider’s stereotype of Brooklyn hipster culture. Now, to be fair, I have lived here almost a year—it will be a year this Shabbat—and so I have been around long enough to know that most of the stereotypes about Brooklyn hipster culture are true. And I should have been tipped off by the fact that the event was being held at Congregation Beth Elohim (known in the neighborhood as CBE), a very large Reform synagogue that often plays host to community events, many of which I have enjoyed this year.
You see what I’m getting at, right? What I had pictured as a cool, vaguely underground event, perhaps in a dark room with a stage and a bar, turning words of Torah into performance art, was in fact more like a youth group program for young adults, held in a large, well-lit synagogue social hall, with the performers relying a little more heavily on the “sermon” than the “slam.” The only drinks were of the cola variety, and the evening was padded with games straight from my synagogue youth director playbook like Jewish Geography 2.0, affably executed by hosts Ben Greenfield and Samantha Kuperberg, who themselves seemed to have arrived straight from a summer on the staff of Camp Ramah.
BUT! And this is a big BUT! (I like big BUTs and I cannot lie…) I’m pretty sure if you went in to the event with fewer or different preconceived notions, you would have been thrilled. The sermons were pretty good. Those competitors who did lean more in the direction of “slam” than “sermon” were often excellent. The judges agreed, awarding the top prize to Yaelle Frohlich for her Moth-ready Orthodox feminist spin on Kafka’s “Metamorphosis.” Check out the video below. Although let me take this opportunity to say that Jina Davidovich, whose gave the most “poetry slam”-esque performance of the evening, was robbed when the results were announced. Most of the performers were under 40 (probably under 30, but I wasn’t checking IDs). Rabbinical students (from at least three different seminaries) were perhaps over-represented in the performer pool, but most made an effort to step outside of a typical sermon-delivery style, although few of them reached escape velocity. (Again, not that they necessarily aimed to!)
So why bother writing about it here? This is one in a series of Sermon Slams taking place all over the world. (Check out their YouTube channel for performances from the Jerusalem slam.) Open Quorum, the new organization — wait, sorry, the new “platform” that is the sole project of the new organization Jewish Public Media — anyway, this group of Jews who put on these Slams has a Kickstarter campaign to raise money to put on 18 Sermon Slams in 2014. (Jewish Public Media also aims to create Jewish podcasts, starting with highlights from the Sermon Slams.)
I would have liked to spend some time asking Sermon Slam creator David Zvi Kalman a bit more about the big picture for Sermon Slam, Open Quorum, and Jewish Public Media after the event, but unfortunately, the event ran long and we had to skedaddle as CBE shut down for the night. I’m curious to see what comes next. While I wasn’t blown away by the event, there were definitely flashes of something that could be great, and even at my most cynical I can’t write off an event that got about 150 (mostly) young Jews to stay out on a weeknight for a Torah-themed event with “Sermon” in the title.

One thought on “Where Hipster Brooklyn and Youth Group Nostalgia Meet”