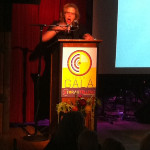 Last night, I attended a gala celebrating Storahtelling. And it was great*.

If you’re not familiar with Storahtelling, they’re a ritual theatre company, focusing on bringing the Torah, and Judaism, to wider audiences, making it more accessible and relevant today. I didn’t crib that from their mission statement, so allow me to

Storahtelling restores the Torah Service to its original stature through a revival of the lost craft of the Maven, the traditional storyteller who translated the Hebrew Torah into local language. Rooted in biblical text and ritual practice, Storahtelling uses dramatized interpretations, traditional chanting, orginal music and live interaction to bring Bible off the page and onto the global stage.

The event was great, celebrating Storahtelling’s “b mitzvah,” which, as founding director Amichai Lau-Levie explained, is a “bar mitzvah, a bat mitzvah, a b mitzvah inclusive celebration for all genders.” And what a b mitzvah it was! Storahtelling turned 13, honoring their founding director, their incoming executive director and members of the board.

But what’s a b mitzvah without a little Torah? Jackie Hoffman, Jewish actress and comedian extraordinaire, studied with the Storahtelling staff, learning the Torah parsha that would have been her bat mitzvah parsha when she was a girl (raised Orthodox, Jackie didn’t have the option). She tackled a topic that many shy from: the rape of Dinah.

She broke the story up, making it more palatable, relevant and interesting. She interspersed chanting and discussion – with a healthy dose of humor, of course. (Amichai gave the English translations to Jackie’s Torah chanting on the fly.)

With more than a little (much appreciated) feminism flavoring her words, Jackie gave voice to Dinah. Dinah, the central character of this story, does not have any of her own words in the Bible. So Jackie, channeling Dinah, asked why the women of the Bible were too often chattel, to be swamped and shared amongst the men. She set the scene: Dinah had “two Jewish mothers. Think about that for a moment. And 12 stinky brothers.” She asked why Dinah’s mother was so willing to marry Dinah to the man who had raped her. (“Was she so desperate to see her daughter married, she’d ok a man who would defile her? Oh wait, that’s my mother!”) And she might have relished in her telling of the circumcisions of the men of Shechem: “They were in penis pain for three days!”

But it was an impromptu statement after she finished (and after she accepted her present from the “Sisterhood,” two gay Storahtelling staff) that summarized Storahtelling’s work so perfectly: “I’m a person who hates everything, and I dug this experience hard.”

And that’s just it. For Jackie, it was about bringing in some feminism, giving voice to the silent and suffering Dinah, and wrapping it all up in some jokes. For others, it might be highlighting gay characters or interfaith families, placing the Torah stories in contemporary settings, drawing and singing and acting the stories… bringing them to life. If you have the chance to get to a Storahtelling event], I highly recommend it.

*The only thing that would have made this night better? Had I gotten my photo taken with the hilarious Jackie Hoffman. And had she performed her Shavuot song, just for me.

One thought on “A Storahtelling B Mitzvah”