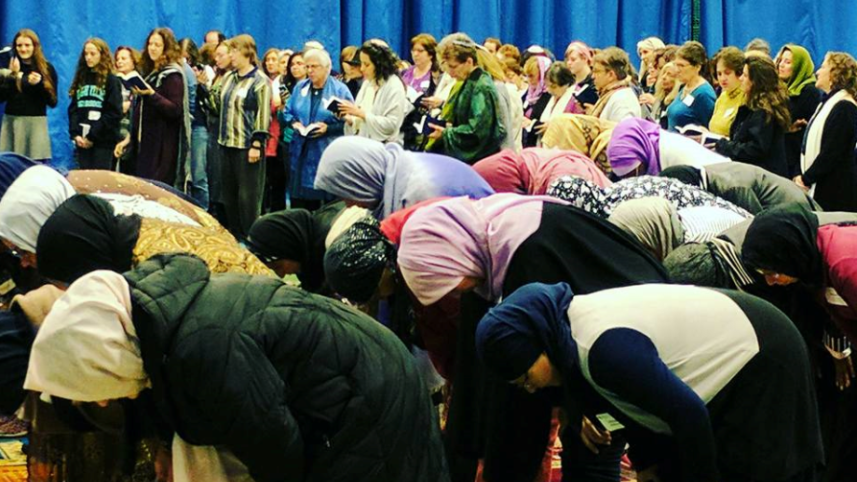 Avigayil Halpern:  Sarah, something I’ve been thinking a lot about lately is the ways in which the burden of creating progressive religious community often falls on women, even as men position themselves as eager allies and members of such a community. Communities that seek out women to lead them give themselves credit for their feminism, but that women’s leadership can come at the cost of those women giving of themselves endlessly to sustain a community that they depend on far more than their male peers. The flip side of this is that men are reluctant to step up because (with the best of intentions) they don’t want to speak over women or take charge inappropriately. I don’t have a good sense of how to balance the competing needs of women’s leadership while not overburdening women! Is this something that you see in your communities as well?
Sarah Harvard:  There’s definitely a lot of frustrations from the women organizers within the Muslim community on feeling as if the burden of elevating and caring for their communities depend on them. A lot of Muslims agree that there’s an optics problem in terms of gender roles and anyone can look to the media and statements coming from the White House and see that. There’s this underlying — and xenophobic — assumption that Muslim women are oppressed and need to be saved. Non-religious traditions like FGM (female genital mutilation) have often been misreported or irresponsibly labeled as a “Muslim problem,” despite the fact of it being a common practice in Christian African countries and Hindu-majority India. There are these claims and assumptions that Muslim women are forced to wear their headscarves or niqabs, or else they’ll get beaten. And the phenomenal thing about all of this is that it’s usually Muslim women at the forefront debunking these orientalist myths but also working to combat the ills within their own communities. When an imam lazily commented on FGM, which seemed to be an endorsement of the practice, it was Muslim women who came together and organized a letter and initiative to not only stop the practice but also call upon mosques and communities to invest time to educate on women’s rights and their autonomy over their body in Islam.

As for their issue of men being afraid to not speak over women, I don’t find that to be the case for the Muslim community. If anything, I believe Muslim men often take up the space of Muslim women. There are multiple panels at Islamic conferences where not a single woman is represented, even in cases of a panel on feminism.
Avigayil:  How do you find the intersection between the religious and the political in terms of women’s leadership in your communities? In the (young, collegiate and post-collegiate) communities where I find myself right now, there’s a lot of overlap between leadership of religious communities and leadership of Jewish communities as political entities. Women are doing community organizing both in terms of arranging who leads services on Shabbat and who shows up to protests during the week. Fortunately, the observant progressive Jewish community is lucky to have many young women rabbis and rabbinical students who are leading spiritually and logistically; they are able to offer a religious voice about political events, and lead formally and have that leadership acknowledged. These seem to me like two sides of the same coin: women are doing the thankless behind-the-scenes work to make religious community and political activism happen, but are also publicly leading Jewish communities at a time when Jewish communities deeply need such leadership.
Sarah:  The political is personal and the personal is political, right? This is especially true for Muslim identity at this current time. I believe we need to look into the state of Muslim identity in the U.S. to fully grasp the identity, as well as, the burden of women in the Muslim community.
For example, the hijab is a religious garment. It’s one that represents modesty and love for Allah (SWT). But living in an intense orientalist and post-9/11 society, wearing a hijab is now seen as a political symbol. A Muslim woman wearing the American hijab is a political act. A Muslim woman speaking about her right to wear the hijab or even just her beliefs is now a political act.
So yeah, there’s a great overlap — or intersection — between religion and politics for Muslim women leadership. I mean, look no further than activist and organizer Linda Sarsour as an example of this intersection. Her hijab is a symbol of her devotion to Islam and a political resistance, and her dedication to fight against injustice and authoritarian powers is a part of her religious duty and jihad, or struggle.
And to be quite frank, I think the Muslims who are leading the political resistance against fascism and xenophobia are Muslim women. I do think Muslim women have an easier ability to take on leadership roles within politics rather than the religious sphere. Part of that is some of the more conservative and mainstream traditions that believe women should not serve as Imams or lead prayers at mosques. Muslim men definitely dominate those spaces, despite a long history of Muslim women serving as brilliant and highly esteemed scholars on the Hadith and Islamic history. I mean, look no further to Aisha who traveled the world as a missionary and scholar for Islam.
Avigayil, there’s a lot of pressure now for Muslim men to come forward as feminists and as ardent supporters of women. But I seem to notice that, like other faith and non-faith communities, there’s a lot of talk and not a lot of action. For instance, there’s a lot of Muslim male figureheads who tweet about the need to amplify Muslim women voices but co-opt them, take up their opportunities, or even worse, silence them when they feel their starpower is being intimidated or threatened. Do you find similar examples to that in your community?
Avigayil:  That definitely happens in Jewish communities too, but I think the problem we face (at least in my communities) is more complacency than active silencing.

Progressive Jewish men take for granted that women lead in our communities, both religiously and politically, and therefore don’t make efforts to uplift women like they should. Men seem to think that if they share an article by a woman on Facebook that they’re being Good Feminists, but those same “gender-conscious” men assume that because everyone is sharing those articles that the work has been done.

I see very little public conversation about gendered distribution of labor in Jewish activist spaces, and even less about distribution of labor in religious spaces. Men might be turning to women rabbis and lay leaders to lead them in prayer and protest, but they also are expecting them to do the emotional and logistical heavy lifting.
A good example of the way Jewish women’s needs have been ignored or subsumed by the larger progressive Jewish community is in the response to the Chicago Dyke March. So many involved, leftist-identified Jewish men reacted with outrage, writing long screeds about Jewishness and the left, while completely ignoring that the people who were most impacted and should be centered in discussion were queer Jewish women. Even many men who are usually pretty good about gender took the expulsion of Zionist marchers/ those carrying the Jewish Pride flag as an attack on Jewishness as such, not something that devolved particularly on queer women. It was so taken for granted that our segment of the community was feminist that women became invisible.
Sarah:  That is all certainly fascinating. I think really what if comes down to is exploring ways we can effective unlearn some of the patriarchal norms within the cultures of our religious communities. There are certainly many examples of frustrations and obstacles female organizers face in Muslim and Jewish communities. I just want to know how can we relieve some of that frustration and overcome those obstacles… But I think that’s a whole another discussion for another time.

Avigayil Halpern is a junior at Yale University, where she is majoring in Judaic studies. She writes on issues of Judaism and gender. She has been published in the Jewish Daily Forward, Haaretz, Tablet, and Lilith Magazine. Follow her on Twitter: @avigayiln.
Sarah Harvard is a New York-based reporter, covering religion, race, and politics. Her work has appeared in Mic, The Guardian, The Atlantic, and Slate. Sarah has appeared on CBS, BBC, HuffPost Live, The Intercept, and Columbia Journalism Review. She is the co-founder of the Muslim American Journalism Association.
Image: Credit