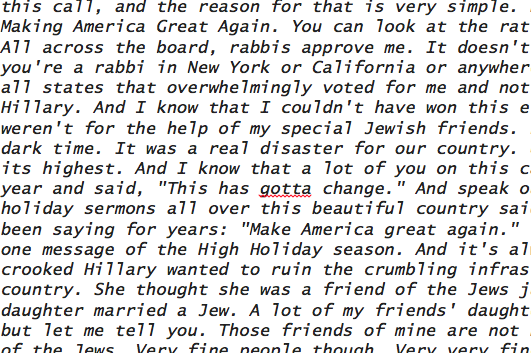 A Transcript of The Trump Call Rabbis Will Miss This Year

The tradition only goes back a few Presidential terms. The way it worked was simple: The Religious Action Center, in conjunction with the Reconstructionist Rabbinical Assembly, the (Reform) Central Conference of American Rabbis and the (Conservative) Rabbinical Assembly would touch base with the White House’s official Jewish liaison to arrange a phone conference with the Commander-in-Chief just ahead of the Jewish New Year. More a monologue than anything resembling an open forum, the phone calls provided a platform for the President to share some sentiments, insights and opinions that would be of particular concern to the American Jewish community. This year, facing doubts regarding the 45th American President’s ability to stand up against hateful—including anti-semitic—movements, and, in the absence of a Jewish liaison in the White House, no such High Holiday phone call is being arranged with the leader of the Executive Branch of the American government.
This news—this break from tradition that may read as a challenge or an insult to the Office of the Presidency—has shocked many Americans and Jews outside the United States.
While I do not know who has been leaking information from the White House, I conducted some of my own research, and I believe that I have successfully pieced together the speech that Mr. Trump would have offered the American rabbinate in 2017: Based off of transcripts of previous statements by Trump (points during debates, victory tour speeches, appealing to the Republican Jewish Coalition, press conferences with or without Netanyahu, tweets and more), the following is what most likely would be the transcript of the American President’s message to Reconstructionist, Reform and Conservative rabbis that they will miss this year:

Rabbi Jonah Rank is the Maskil (“Teacher-of-Tradition”) at Shaar Shalom in Halifax,  NS. Thon is a musician and the Managing Editor of Zeramim: An Online Journal of Applied Jewish Thought.