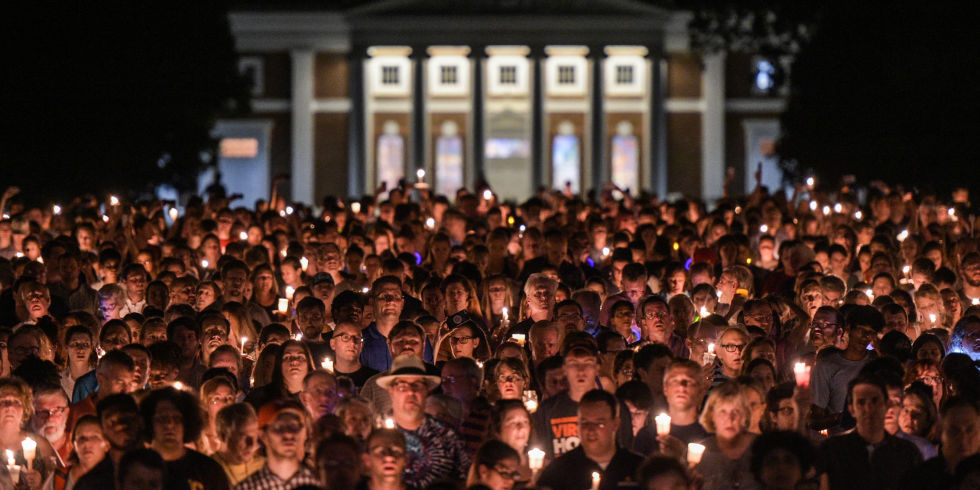 A few years ago, scientists released their findings from a study on the physiological effects of the Holocaust on survivors’ DNA. Their research showed that the impact of that trauma was so profound, so thoroughly life-altering, that it actually changed their genetic makeup—which became an inherited trait passed down for all the generations since. Even those three generations removed from the Holocaust—Jews in their 20s and 30s—had increased risk of heart disease, obesity, diabetes, and early death.
I’ve been thinking about that this week as I watch myself respond to what happened in Charlottesville.
Reading the news from Charlottesville, I feel cleaved in two. I have been conscious about “doing the work” to unlearn my implicit bias and learn the ways in which I benefit from White Supremacy. I have a sense of what I should be doing right now: taking to the streets and raising money and putting my whiteness and my body in the way of this racist violence. The White Anti-Racist Ally part of me feels a driving need to own my privilege and lead solidarity work and use every ounce of my being to fight.
But there’s this other part wants to go home, draw the curtains, and lock the door. It’s the part of me that feels less like a White Person, and more like a Jew. A Jew who has been taught her entire life that ours is a people under persecution. That we have been victimized in every generation. That our community has been in danger since time immemoriam. And as much as I abhor that reality, I can’t escape it. I feel a visceral and animalistic desire to protect myself and my body and my community because I feel vulnerable to that violence. I hear the Nazi anti-Semitic chants and my stomach drops. I hear Stephen Miller call a White House reporter “cosmopolitan” and my heart quickens, because that euphemism is so cutting and familiar and I know that I don’t exist in his ideal America, either.
I know that my mental anguish and fear is literally nothing compared to that of people of color, who live under the threat of bodily harm every day. I know that I am read as white and benefit from White Supremacy and am not in danger every time I leave the house. My body, my white body, is not at risk in these moments. I’m aware that my fear is part of the system, that by succumbing to it, I am adding a support beam to the system that kills Black and Brown people in this country. I want to be part of the anti-racist resistance. Even speaking about this fear outloud feels indulgent, selfish, self-serving.
And at the same time, I can feel the tug of centuries of Jewish survival instincts that are passed down from generation to generation, l’dor va’dor, telling me not to run too fast or go too far, lest they find you too.
When I wrote about this on Facebook lat Saturday, I received two kinds of responses. The first, an amen from the choir: “thank you for voicing this,” “this is exactly how I’ve been feeling,” etc. The second, a sort of encouragement, bordering often on admonishment: “we have to fight nazis anyway,” “people of color have it worse,” “we don’t have a choice.”
This latter response was, to me, almost baffling. Nowhere did I say I intended to hide from the realities of our country. At no point did I say I felt my fear was sufficient to excuse inaction. In fact, I felt I was saying just the opposite—that I was trying to figure out how to do, how to act, despite my fear.
There is no true solution to this problem. There is no real end to this piece. But if I can offer anything, it is this: we must talk about it. We must acknowledge the fear that incidents like Charlottesville bring up in us. Being honest about our reactions to White Supremacy is not mutually exclusive with fighting White Supremacy. Our trauma is gene-deep, well-earned and unknowingly inherited. We have to say that out loud, and together, find a way to do the work anyway.