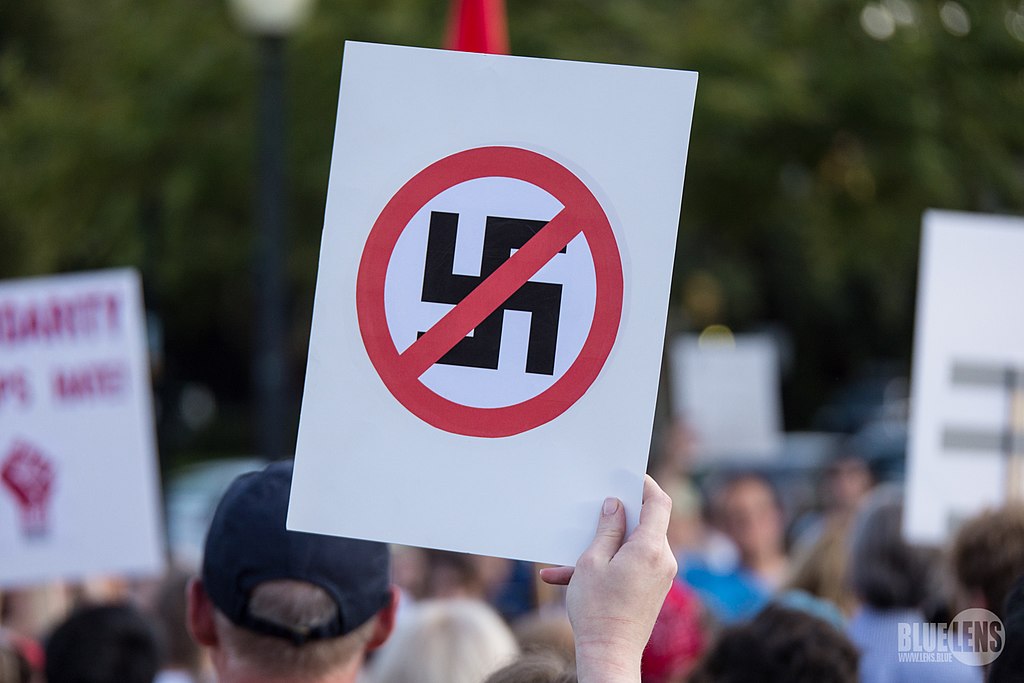 #TorahForTheResistance: A rabbinical student in the Charlottesville protests

#TorahForTheResistance is a campaign by young rabbinical and religious students about Jewish resistance to Trump through the lens of faith, Judaism, and spirituality. Read more here.

Ever since I got back from Charlottesville — where I stood among clergy with friends, colleagues, and mentors to face off against white supremacists, Neo-Nazis, and the KKK — almost anyone I run into says something to the effect of, “I’m so happy you are alive.”
Going to Charlottesville I honestly believed my kippah and tallit would protect me. They’ll see me as clergy, I thought. Even white supremacists know attacking clergy is bad for press, so they won’t attack me I thought. It was not until Shabbat morning on August 12, 2017 before we marched to Emancipation Park, when Rev Osagyefo Sekou said something to the effect of, “They do not see you as clergy. They see you as queer commies here to destroy their culture,” that I truly felt afraid.

Let us now relate the power of this day’s holiness, for it is awesome and frightening.
This line begins one of the most powerful and chilling pieces of liturgy in the Jewish tradition: the Unetaneh Tokef.  This liturgical poem, said every year on our High Holy Days of Rosh Hashanah and Yom Kippur,  invites us to reflect on our own mortality. Fittingly, the liturgy continues with a litany of many ways one could die:

Who will live and who will die?
Who by fire?
Who by water?
Who by strangling?
Who by stoning?

We as Jews are invited by this liturgical poem to confront our mortality every year, asking and reciting “Who will live? And who will die?” yet it was not until I went to Charlottesville that I understood just how precarious life can be.


In the picture here, I appear wearing blue tallit and white kippah in a single file line with my fellow clergy. My face is looking to my left with a mix of fear, anger, and deep concern. This picture was taken after someone spilled their coffee on a white supremacist, for which that white supremacist then punched him. They started a brawl. The only other Jewish clergy in line with me were at the far left of this line with their arms linked. They were closest to the brawl. I kept looking over to see if they were okay, but I also had to keep my eyes on the white supremacists in front of me in case they attacked. My line of sight was also blocked by the clergy to my left, since we were single file and I was not tall enough to see over all of them. For at least five minutes I did not know if my friends and colleagues were injured, or even possibly dead.
Who will live and who will die?
The reality of the day was my friend and fellow classmate Salem Pearce along with my colleague Rabbi Mordechai Leibling, could have been pulled into that brawl. White supremacists could have targeted them for similar reasons they would have targeted me: they are Jewish. At the time, they wore tallitot as the white supremacists  marched around us were chanting, “Jews will not replace us.”
And yet, here we all are. Unlike Heather Heyer, may her name be for a blessing,  we made it out alive. We lived to fight another day (as one of our training mantras taught us). So what is my Torah in this moment?
“Let us now relate the power of this day’s holiness, for it is awesome and frightening.” Let us truly examine events in Charlottesville, and now the anticipated actions in Boston. Let’s recognize that there are white supremacists all throughout this county. They live in our neighborhoods. Let’s recognize that fear and organize with other marginalized communities Let’s help make this country a place where we refuse to honor those who fought to uphold slavery with monuments.  Let’s start having the really difficult conversations with friends and family about white supremacy. About our country’s racist history.
The Unetaneh Tokef poem (piyyut) also asks

What America will you fight to see live?