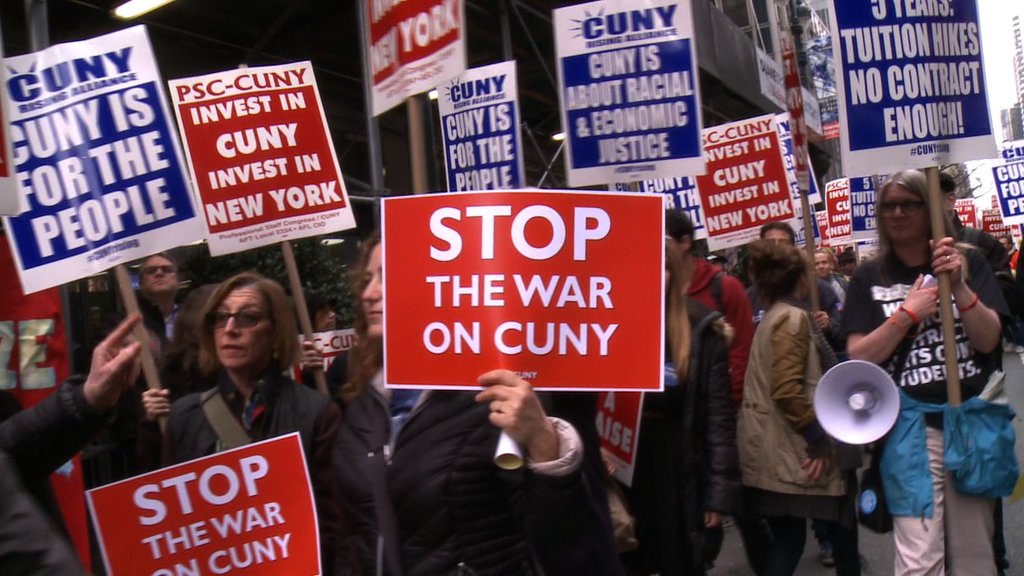 An Unholy Alliance: Jewish McCarthyism and the Attack on Public Education

This week the New York State Legislature voted to slash $485 million in funding for the City University of New York (CUNY), a sum comprising one third of state allocations to the senior colleges of CUNY, including Hunter, Brooklyn, Queens and City Colleges. Fabled in Jewish history because of its fine and affordable education, the CUNY system has educated generations of immigrant and working class students. It continues to serve Jewish students, with both Brooklyn and Queens Colleges ranking as having the top ten largest Jewish populations at institutions of higher education in the United States.
[pullquote align=right] That’s right: Jewish institutions are now helping to eliminate affordable public education.
[/pullquote]Since the legislature voted, Governor Andrew Cuomo responded to faculty, students and staff protests by restoring full funding to CUNY. But the legislative vote represents the emergence of a dangerous collaboration.
The gloves-off attack on CUNY emanates from an unholy alliance between the increasing McCarthyism of the American Jewish establishment and the savage, starve-the-beast right-wing evisceration of public education. That’s right: Jewish institutions are now helping to eliminate affordable public education.
‘People of the book,’ nothing: this is war. And this war is being waged because of a dangerous and inaccurate, McCarthyist logic that equates any criticism of Israel with anti-Semitism.
The Jewish McCarthyist equation goes something like this: criticism of Israel, particularly support for the Boycott Divest Sanction (BDS) movement = advocating the destruction of Israel = anti-Zionism = anti-Semitism. The magic of that sentence is that the equal signs do the heavy lifting.
But many establishment Jewish groups uphold this questionable equation by making war against crimes of thought and association, evidenced in the accusations by the Zionist Organization of America (ZOA) this week against Staten Island CUNY Distinguished Professor Sarah Schulman.
[pullquote align=left] This assault intentionally places a college degree out of reach of many working-class and immigrant students.
[/pullquote]Any criticism of Israel is viewed as intrinsically anti-Semitic. There is no regard for niceties such as civil liberties and academic freedom, no awareness that a rich history of Jewish anti-Zionism preceded the establishment of the state of Israel. CUNY Professor Eric Alterman, who opposes the BDS movement, defends the right to free speech on campus, asserting that in a dozen years of teaching at CUNY, he has never heard “a single anti-Semitic syllable uttered.”
While the targeting of scholars and activists like Schulman has become standard operating procedure in the American Jewish establishment’s relentless war on dissent, the attack on CUNY represents a new evolution. Instead of policing rhetoric and bullying its way into campus policy-making, the ZOA now joins the nation-wide right-wing assault on public higher education. By targeting public universities like CUNY, this assault intentionally places a college degree out of reach of many working-class and immigrant students.
Alleging a host of anti-Semitic incidents on CUNY campuses primarily associated with the activities of Students for Justice in Palestine (SJP), the ZOA contended in a February letter that by allowing these activities to go on, CUNY violated the civil rights of its Jewish students. In particular, the ZOA targeted a statement at the November, 2015 Million Student March, in which CUNY SJP chapters characterized CUNY as “Zionist,” pointing to the use of tuition dollars to invest in “private prisons, detention centers, and over $1.5 million to Israeli companies and companies that support the occupation.”
[pullquote align=right] In the 1950s, McCarthyism ruined lives and careers, undermined multiracial coalitions for civil rights, and was ultimately discredited.
[/pullquote]While asserting that SJP violated the civil rights of Jewish students, ZOA supported a broad assault on the rights to free speech and to education of CUNY students. SJP’s main point was about the high cost of CUNY to its students. Nationally, the Million Student March protested rising tuition and debt levels, calling for more equitable and accessible public higher education, countering current American Legislative Exchange Council (ALEC) -inspired assaults on their right to education.
All wars have their collateral damage. In a climate of marked racial divisiveness, hateful acts against many, including Jews, proliferate. With the American Jewish McCarthyist establishment broadcasting “wolf” at the top of its lungs every time a campus group supports BDS, it will be difficult to discern actual threats against Jewish people and institutions. These threats tend to come together with attacks on the rights of Arabs and Muslims, people of color, women, and GLBTQ people.
And this is the real threat posed by the unholy alliance. In the 1950s, McCarthyism ruined lives and careers, undermined multiracial coalitions for civil rights, and was ultimately discredited. Contemporary Jewish McCarthyism does the same. By siding with the current war against public education, Jewish McCarthyism betrays what is best in Jewish ethics and in Jewish American history. Abandoning longstanding commitments to education, civil liberties and civil rights makes no one safer.

2 thoughts on “An Unholy Alliance: Jewish McCarthyism and the Attack on Public Education”