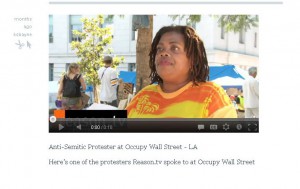 And Sandra Fluke's boyfriend isinteresting why?

Gawker has discovered a variation on Godwin’s law: “As a Tea Party discussion grows longer, the probability of anti-semitism approaches one.”
Apparently Sandra Fluke’s dating a Jewish guy (Bill Mutterperl) is somehow relevant… to something?

“anyone familiar with Boston and New York political history knows about the wealthy Mutterperl family’s long tradition of supporting the typical Jewish variant of socialism.
I wonder if Adam has ever been to a kibbutz.”

As Gawker notes, “These are literally the same Tea Partiers who accused Occupy Wall Street of antisemitism.” -it’s in fact, the same guy: Brooks Bayne

As someone involved with Occupy Judaism and several other variants of Occupy in my native city, how much damn time did I have to spend talking to newspapers about how stupid the accusations of antisemitism were? And yet, people keep defending tea-partiers as misunderstood?
Feh.

3 thoughts on “And Sandra Fluke's boyfriend isinteresting why?”