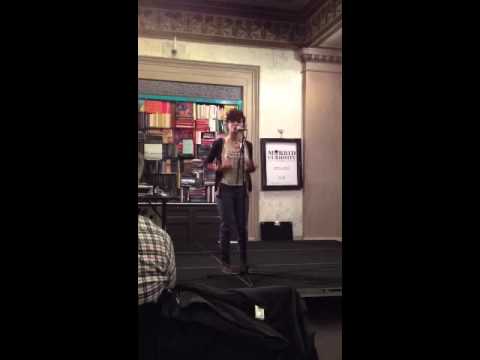 Louder Than a Bomb is Chicago’s High School Poetry competition, though that is not the spirit found among its participants.  Founded by local poet, author and jew Kevin Coval, Louder Than a Bomb is something of a Chicago darling. WBEZ covers the finals event every year (Coval was a contributor to the station’s 848 program).  Now in its 10th year, its is the subject of a new and inspiring documentary film getting rave reviews.
One of the previous winners, and a subject of the film, is one Adam Gottlieb, whose poem Maxwell Street surprised many with its thick references to his Jewish identity.  Coval himself has explored his Jewishness in his work, and this year, another young poet, Tova Benjamin, emerged from the Orthodox stronghold of West Rogers Park.  Her poem, Not an Envelope Opener, is getting a bit of notice for similar reasons.  Benjamin has apparently strayed from the derech, but one hopes that means a deeper exploration of her faith and identity and not a departure from it. Indeed, I would like to hear more from her on the subject.  Check her out below, or listen to this interview on WBEZ.