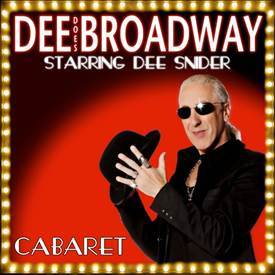 Is it Still Purim Yet?

Dee Snider of Twisted Sister fame, is apparently doing an album of showtunes. Well, we all gotta grow up sometime, right? Who knew?
From Broadway.com:

Twisted Sister frontman Dee Snider will team up with Tony winners Patti LuPone and Bebe Neuwirth, in addition to Broadway veterans Cyndi Lauper, Clay Aiken and more on his new album Dee Does Broadway. The heavy metal singer’s forthcoming album will feature a selection of classic Broadway hits. Dee Does Broadway is set for release on May 8 on the record label Razor & Tie. Snider himself appeared in Broadway’s Rock of Ages, which features music from his band, in the fall of 2010.

2 thoughts on “Is it Still Purim Yet?”