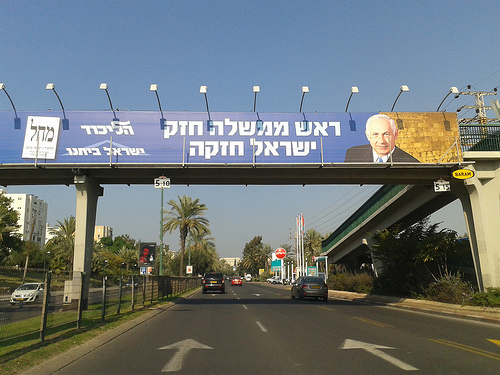 And you thought American elections ads were bad 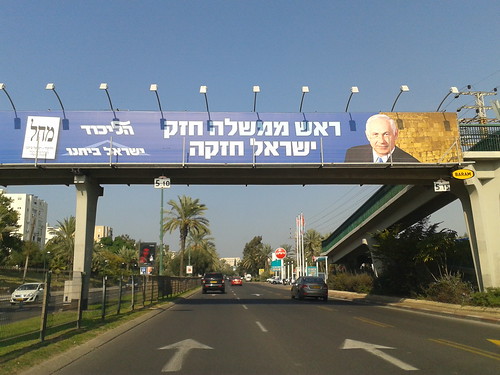 Have you entered Jewschool and Mah Rabu’s elections predictions pool? Monday, January 21st at midnight EST is your last chance to enter!
I’m finding two big differences between American and Israeli electoral advertisements. First, ads here in Israel are more entertaining, mostly because they’re way more offensive. It’s even worse than the coded racism of past years’ Republican commercials — there seems no need for anything covert here. This month, the Sephardi ultra-orthodox party called Russians goyyim while an extreme right party charged Palestinian citizens with disloyalty, just to mention a couple that raised eyebrows.
The second big difference is the blessedly short campaign period here, no more than 101 days and only during the final weeks of which TV ads may run. The short campaign season is thanks to strict Israeli elections regulations: The maximum campaign gift is $480 per household annually (believe it!); only parties can receive donations for the general election; individuals may only raise money for their primary campaigns. (And only a handful of parties even conduct primaries. Avigdor Lieberman, for example, picks Yisrael Beiteinu’s entire slate.) Most notably to me, advertisements on radio, TV and print are paid for publicly based on a party’s existing seats in Knesset. Yes, that means that Kadima, sitting at nearly a quarter of the outgoing Knesset, received the most advertising airtime even though it will barely win one seat.
This is not to say that Israeli elections are free from undue influence. Kibbutzim and the largest union, the Histadrut, are exempted from some restrictions on financing elections. (Guess who they usually support.) Meanwhile, institutions like the state-run religious military academies illegally mobilize for religious parties. And the right-wing parties’ primaries awash with many times the amount of American Jewish money than the left. Worse, Yisrael Hayom is owned by American casino magnate Sheldon Adelson and is Netanyahu’s personal trumpeter. The latter is apparently perfectly legal.
Minus the state-run yeshivas, America stands to benefit by adopting the same restrictions on campaign funding, campaign length, and public financing. Below you’ll find TV spots from most of the major parties this election, even the ones which put American race-baiting in Little League. (Thanks to my fellow Dorot Fellow Daniel Haboucha for allowing me to share the links he collected.)
Likud Beiteinu, merger of right-wing secular Likud with right-wing secular Yisrael Beiteinu
In one of the strangest surprises early this election cycle, Binyamin Netanyahu’s right-wing Likud party combined their slate with Avigdor Lieberman’s further-right Yisrael Beiteinu. The attempt was in order to seal their prospects as the largest party. In this ad, the various heads of further-left parties chant annoying slogans (“End the occupation!”) before they are blown up by Ahmadinejad. Their combined seats are expected to decline from 42 to around 34.

Labor Party, secular left-wing
Stav Shaffir, one of the youngest additions to the Labor slate, got her start as a leader in the 450,000-strong social protests in summer 2011. A split in the movement emerged between those who believed entering politics would deliver the results that street protests couldn’t deliver. She is the #8 slot in Labor. This ad features people too young to vote asking voters to make the right choice to end their fear of wars, Bibi’s trickle down economics, and the religious right. Labor is polling to increase from 8 to around 18 seats.

Shas, Sephardic ultra-orthodox
This now-infamous TV spot was accused of racism against the Russian emigre community as not actually being Jewish. Which, by orthodox religion, many are not and are prevented by law from basic rights to marriage, divorce and burial in Israel. Attempts to expedite recognition of their Jewish status under orthodox law have been blocked by the increasingly extreme ultra-orthodox parties like Shas. In this ad, a darker-skinned groom discovers that the Russian party gifted a fax machine to his wedding — so his Russian-accented bride could receive her Jewish conversion. They are currently polling to remain around 11 seats.

HaTnua, new centrist secular party by former Kadima head Tzipi Livni
Tzipi Livni is loved by some and hated by others, as is her new political party, the only one to make the peace process a central platform message. Ousted as chairwoman of Kadima this year, her departure from the party heralded its utter collapse. Her advertisement here says hope can conquer fear. She’s polling around 8 seats.

Yesh Atid, new secular party
Yair Lapid, former newsman, is the newest centrist in the ring with his new party Yesh Atid (“There is a Future”). Aside from his universally acclaimed good looks and his positive message, he’s scaring the bejeezus out of the religious parties with his central aim to force yeshivabuchers into national service or the army. In this ad, he decries the high cost of living, unfair military exemptions, and other social issues as upside down (“Hafukh!”). He’s expected to pull around 7 seats.

Kadima, centrist secular
The biggest loser this election, Kadima will virtually disappear from 28 to maybe 2 seats. In this TV ad, party head Shaul Mofaz portrays himself as a noble and honorable person who held his nose and entered the ugliness of politics. Also, he killed a lot of terrorists.

Otzma L’Yisrael, extreme right-wing
The new Otzma L’Yisrael is founded by former members of Meir Kahane’s racist party. A bus advertisement of theirs was banned for racism by the Israeli elections commission because it singled out Palestinian citizens for disloyalty to the state. This advertisement is inciting against the African refugees seeking asylum in Israel and can be summarized as “Tonight, black men will kill you.” Otzma L’Yisrael may receive 1 or 2 seats this election.

2 thoughts on “And you thought American elections ads were bad”