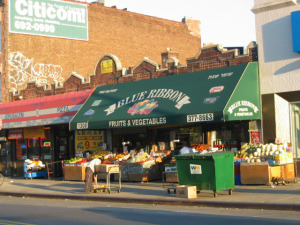 How much does it cost to be Jewish?

“I grew up thinking Jews should work in social change,
but only investment bankers can afford a Jewish life.”
–Jewish Women Watching

I was at the Blue Ribbon food store on Ave. J in Brooklyn the night before Rosh Hashana.
“Store closing! Store closing!”

I wandered around, people rushing past me. Yogurt? Should I buy yogurt? Cheese? Tuna fish? There were no prices on anything. I had been putting off food shopping until the last minute, and I was paying for it. Blue Ribbon was the last place open that late erev Rosh Hashana.
I had to think pretty quickly. This particular year, I was going to have three days to fill with food. Imagine coming up with a 3-day menu for one on a budget…when there are no prices on anything. And I had to buy something.
I hastily went over to my safe zone–the challah rack–and picked up a round challah and a pack of six rolls, deciding which would be a better buy. Could the round one really be cut into six equally substantial pieces? People were pushing up against me while the “Store closing!” character kept bellowing somewhere in the depths of the store.
I picked the rolls. They’d last me about two days. A $4 choice, cash only.
The fact that there were no prices said to me that I was the only one worrying about the cost of things. Figuratively, though, everything has a price tag. Who knew that Jewish living could have so many material trappings?
On Yom Kippur, I heard enough pledges to the shul in the amount of $613  (or “eighteen times three,” very clever, guys) to last me a lifetime.

And Sukkos made completely transparent what had been perhaps inadvertently hidden. My street was lined with people selling esrogim and tinsel and bird cages. There was a sukkah store competing with another sukkah store across the street. And of course Eichler’s was right there, too. You got the sense that if you wanted to participate, really participate, in Jewish life, you had to be ready to shell out a whole lot of money for the requisite commodities.
The 2001 NJPS study shows that the median income of Jewish families was about $54,000 (compared to the $42,000 national average), with over one-third of households having an income of over $75,000. I can’t be certain, but I think my own family’s income growing up probably hovered around $25,000. The basic line is that “the Jewish working class has all but disappeared,” but that’s not true. Unfortunately, the Jewish community seems to be set up as if it is. Of course there is aid available; yeshiva stipends and gemachs and the like. But being the recipient of such aid, just like in secular society, puts you in the periphery of Jewish life. In other words, if you’re constantly eating in someone else’s sukkah, you’ll never have a sukkah to call your own!
Most of the discussion has centered around the costs of synagogue membership and day school. Indeed, the required costs of day school etc. for a family with children is estimated to be about $30,000 a year. But the costs go well beyond this into everyday life–particularly where it can. You can wear a hair covering or you can wear a $2,000 sheitel. You can buy your clothes at department stores or you can buy them at the special fancy $30-per-one shell store. I’m sure there is community pressure, at least I sensed it by living off Avenue J and trying to walk down to the subway with my ripped denim skirt from Goodwill when everyone else got their nice new clothes from Tznius Princess or who knows where.
Same with food: I could buy it at Blue Ribbon aka No Listed Prices R Us, or I could go all the way down to the secular store in Union Square instead. Oftentimes, a regular, national brand would be missing from the kosher store in favor of its more expensive Israeli counterpart.  I can’t afford a $16 lasagna just because it has a special hechsher from Israel. I can’t afford to be selective with hechshers! If that’s not some kind of community pressure I don’t know what is.
But I knew if I had wanted to participate, really participate, I’d be buying those Israeli brands, not going to Union Square.
So how much does it cost to be Jewish?* Here’s an answer:
Another dimension to be measured is the cost of Jewish living as a percentage of total income. The members of the Orthodox Jewish community, which comprises about 10 percent of the total Jewish population, have on average accumulated less wealth and earn less money than other Jews. Nevertheless, they remain steadfast in their commitment to day school education, trips to Israel far beyond the frequency of other Jews, and, to a lesser extent, Jewish camping experiences. At the same time, they have more children per household than other Jews, keep kosher with its concomitant higher costs, buy special clothing free of shatnes, and, for the Ultra-Orthodox, purchase wigs for women’s hair covering. Given all these additional expenses, the Orthodox or traditional practitioners spend 25 to 35 percent of their available income for Jewish living, often at a sacrifice of more adequate housing, a more comfortable lifestyle, and the acquisition of savings.
-“The Costs of Jewish Living,” 2008
The community sets the standards.
—
American Sociological Association: United Jewish Communities. 2003. National Jewish Population Survey, 2000-01. New York, NY: United Jewish Communities [producer]. Storrs, CT: North American Jewish Data Bank [distributor].
Bayme, Steven. Bubis, Gerald B. The Costs of Jewish Living: Revisiting Jewish Involvement and Barriers. American Jewish Committee (AJC). 2008: http://www.bjpa.org/Publications/details.cfm?PublicationID=322
*I know, “How Much Does It Cost to be Orthodox” is more accurate, but it doesn’t sound as good.

30 thoughts on “How much does it cost to be Jewish?”

Jewish Twitter has some thoughts re: Deborah Lipstadt as US antisemitism envoy