(Photo  from “My So-Called Selfish Life,” courtesy of Trixie Films)

In this mini-miniseries, we’re taking a look at being Jewish and childfree from two new angles. First up is an interview with Jewschool contributor Chanel Dubofsky, about her role as a subject in Therese Shechter’s new documentary film on childfree women, My So-Called Selfish Life, as well as pronatalism, white supremacy, and their overlap with white supremacy. In the next installation, we’ve got an interview with Rebecca Epstein-Levi, Mellon Assistant Professor in Jewish Studies and Women’s and Gender Studies at Vanderbilt University, whose paper on the complicated nature of Jewish continuity is sure to surprise you. 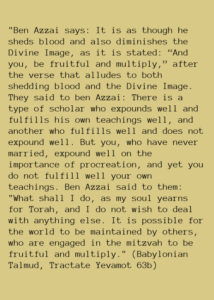 In the Jewish community, the discussion of continuity is the usual center of nearly every effort or program. While today, that drive often is expressed in terms of rebuilding numbers after the holocaust, it is traditionally a part of Judaism to pursue childbearing as an essential part of community and family. Indeed, there is a great deal of discussion of the importance of children in every era – Torah, Talmud and commentaries up to modern times.  And yet, we do encounter striking moments of ambivalence. In the talmud, as we saw above in tractate yevamot 63b, we see the famous rabbi, Ben Azzai in the midst of an extensive discussion of the importance of having children – until the peculiar moment when his students go, hey… wait a minute..you don’t have any children!

In Ben Azzai’s case, he tries to wiggle out of his seeming hypocrisy, by saying that he can’t help it – he loves torah too much , and there are plenty of other people to populate the world – which is a fascinating tack for a rabbi to take, given that there is a torah-level obligation to have children according to our tradition (or at least for men to have children), and instead say that it is something that can be for others because he is compelled to pursue this other deep and powerful project.

The interesting point to notice here is that in Judaism the obligation is on men to procreate, and here it is ben Azzai who rejects it; today though, it is mainly Jewish women who bear the brunt of Jewish continuity pressure. It is “peculiar” for Jewish women to choose childfreeness. We have extensive discussions about childlessness, but the assumption is that women (especially) will want children.

Among women who chose not to have children, there is very much an assumption that, like ben Azzai, it must be because there is something deeply consuming that she must do – perhaps she’s a writer who is compelled to write or has such a high powered job that there’s simply no time for anything else (and certainly however peculiar that is, had she decided to try and juggle both, plenty of people would judge her and say “well why did you have kids if you were just going to let a nanny or daycare raise them?”). And until recently, among those who are infertile, there was a sense that space was rarely made for their struggle. Simultaneously, there remains a certain level of communal comfort – at least the assumption of the community is that those who are infertile have the right desires. At least they want to have children. The childfree, with their lack of desire to pursue the imperative to reproduce, remain a mystery.

It’s natural for societies to want to reproduce themselves – indeed it would be strange if they didn’t, since evolutionarily that’s a necessary thing. But that’s a society-wide need , not an individual one – in fact, there are always individuals who can’t have children for various physical or orientation reasons, and that’s a normal part of society, and indeed most societies have roles for those people as “aunties and uncles” or such. So we would expect that there would be a “normal” set of roles in society for people who choose to be childfree, as the imperative is communal, not individual. Jewishly, of course, the imperative is individual.  But as we saw with Ben Azzai, there have always been people who cannot fit into that role.

There are tons of examples of how Jewish communal pressure to have children manifests itself: A shul/independent minyan/ JCC, etc, likely has a set of programs directed towards teens (youth groups), singles and another for young families, which tends to be the center of programming effort (varying by community, of course).  And for people and couples who don’t have young children? Nothing. Why would you bother, when the assumption is that Jews who want to be involved in Jewish communities will want to have children?

Chanel Dubofsky, long-time Jewschool contributor and a subject in the recently released documentary by feminist filmmaker Therese Shechter, called My So-Called Selfish Life, about the choice to remain childfree, recalled the first time she designated herself publicly as childfree in a group of Jews.

At a gathering of the PresenTense organization in 2006, she raised her hand when the leader of the meeting asked if there was anyone in the room who didn’t want to have children. “I was the only one who did, and as soon as my hand went up, I knew I’d made a mistake. The meeting topic was Jewish continuity, but I guess I thought we could think bigger than literal procreation. The person in charge gawked at me. She actually leaned forward in her chair with her mouth open and said, ‘What do you mean you don’t want kids? Why not?’ That was the moment I realized I couldn’t be vocal about this in normative Jewish spaces, and I had to accept that I probably wouldn’t find people like me in places like that, and I have to absorb those reactions and just know that my decision isn’t welcome.”

When Jewish communities exclude and invisibilize the childfree, they echo that sentiment that having children is essential to female identity and choosing otherwise is worthy of alienation from Jewish spaces.

Interviewed in Shecter’s film is Israeli sociologist Orna Donath, whose first book, Taking the Choice: Being Childless in Israel elicited exactly the reaction you’re picturing. Donath’s most recent book, Regretting Motherhood, dissects the consequences of hyperactive pronatalism, which goes hand in hand with capitalism, pressuring women into having children without really thinking about what it really means to their lives. Capitalism has sold motherhood to everyone, she argues, with the promise of having the perfect family and a fully realized identity, but without any of the realities of what it really looks like (especially in countries without universal health care or parental leave).

It isn’t obvious, but actually the current political moment which began with the rise of Trump during his campaign and which freed the reactionary right to speak their mind and act on it with impunity, has merged with the preexisting pro-natalism of our society in toxic ways. What isn’t apparent is the way that the current anti-abortion movement and its current strength has arisen out of white supremicist and anti-immigrant, anti-queer, and anti-Semitic white nationalist ideologies (which  in which women are barely human or perhaps not human, but merely serve as bodies to provide birth and to sexually service men. This is something which we have seen acted out by incels especially the violent attacks on women in various settings where we have seen tracts written by men spelling out the ideologies of the right connected to their “right” to have the sexual service, the labor of, and the product of women’s bodies.White supremacist, White nationalism and incel ideologies all develop indirectly out of anti-feminist and pro-natalist Christian theological movements.

Jewish legal discussions of abortion, on the other hand,  stem from a completely different set of assumptions.

Jewish sources on abortion definitely span a spectrum of permissiveness, but come from an entirely different perspective than Christian sources do. They view fetuses largely as part of the woman’s body (especially earlier in the pregnancy) and those sources which are opposed to abortion largely view it as self-injury, which is forbidden. But there is a broader spectrum of opinions, and always consider saving the life of the mother (and what saving the life of the mother is, also covers a broad spectrum) as a priority

Ultimately, pro-natalism, as a core value in Jewish communities is dangerous, and not only because we’re shutting doors in the faces of childfree folks. Our almost feral discomfort with the childfree leads us to align with anti-semitic, white supremacist and white nationalist ideologies, a path we continue to take. Similar to structural racism, we don’t notice the institutional nature of it because it’s in the air we breathe. The syntonic joining of these ideologies embed themselves in our society through parallel development and the unconscious sinking of its roots into our daily lives. Perhaps what is more likely to  benefit a Jewish future is an alternation in our thinking towards a wider vision of what we mean when we talk about continuity.