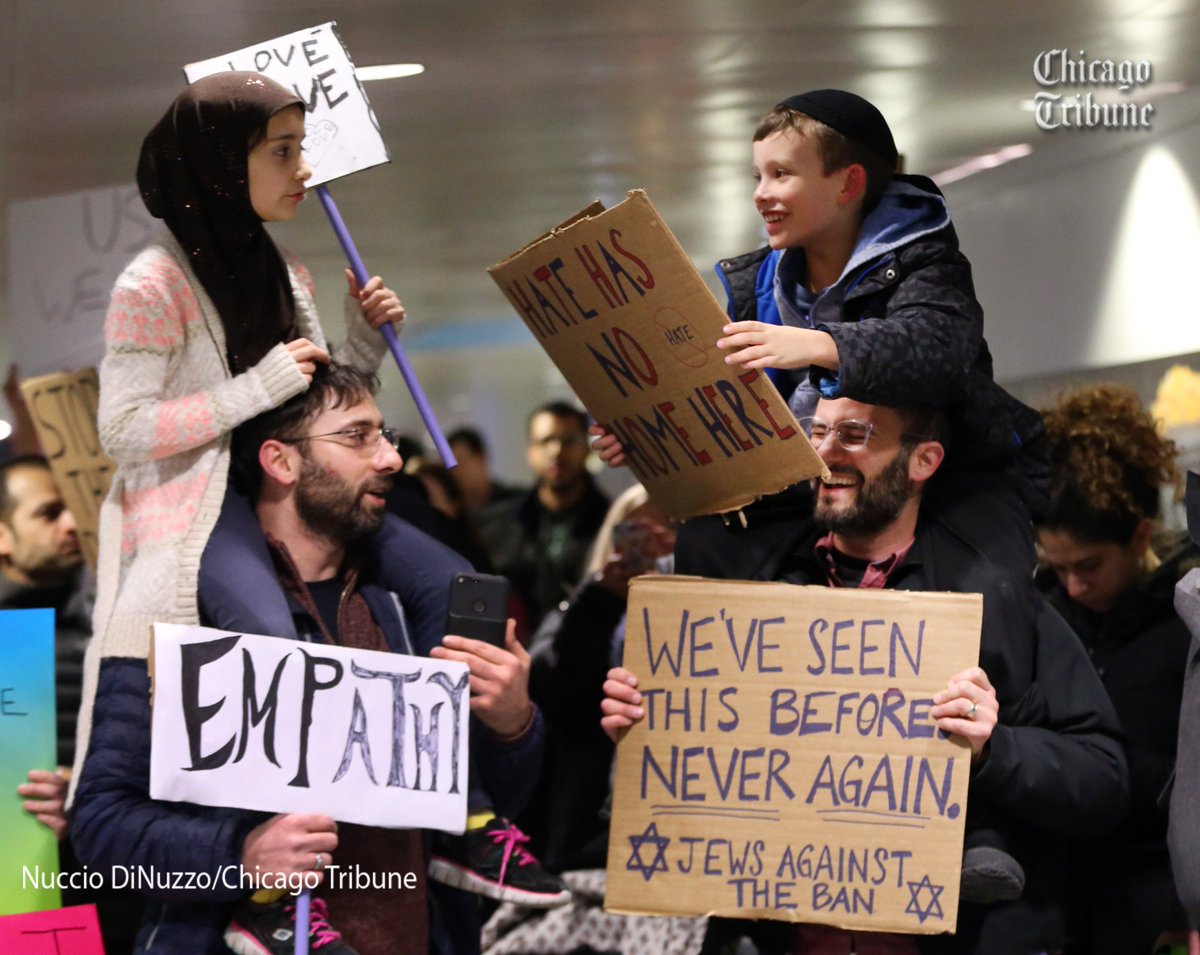 How can Muslims and Jews use intersectionality to confront White nationalism?

Trumpian White nationalism and supremacy are transnational and have found their mirror globally, in emboldened movements that threaten both Muslim and Jewish communities alike.  There is a way forward, however, and it relies on some hard home truths.
The Rise of Transnational White Supremacy
The growing wave of far-right, White nationalist populist movements such as Brexit and the 2016 election cycle are closely tracked to anti-Semitism, Islamophobia and a fear of refugees — the fear of the “other.”
A “Muslim ban” was a key Trump pledge, the outcome of which is still working its way through courts. As the number of refugees from Muslim majority countries has spiked, state policies that exclude Muslim and non-white entrants have now come to define the essence of European values, in nations such as Hungary or the Czech Republic. “I can tell you we will never — under a quota system — bring one single Muslim to Slovakia,”   Slovakian Prime Minister Robert Fico said. Meanwhile Hungary’s far-right Jobbik party has called for lists of Jews who pose a “national-security risk” to be created. In Greece, Jeffrey Goldberg writes in The Atlantic, “a recent survey found that 69 percent of adults hold anti-Semitic views, and the fascists of the country’s Golden Dawn party are open in their Jew-hatred.”
And although White supremacy benefits from the EU power structure, it hasn’t stopped European communities of color defending what it means to be European. A majority of them in the UK voted in favor of the EU, for example. The language of Brexit is also the language of anti-Semitism and Islamophobia: the phrase “Islamic terrorism” is invoked repeatedly, to create fear and secure political power. “America First” used in Trump’s election campaign mirrors that of the slogan “Britain First”.
Transnational supremacists are also able to organize across nations, institutions, and systems. A clear example is the Russian government’s funding of Islamophobia abroad and throughout the U.S. presidential election cycle.
Emboldened Nazis rallied in Charlottesville, Virginia, using racist chants such as “blood and soil” and “Jews will not win,” resulting in the death of protester Heather Heyer. Trump, when pushed to make a statement about the rally, said that there were “very fine people on both sides.”
When Dena was first studying abroad in Denmark, she met a Danish politician who told her that burqa bans were necessary because Denmark was a Christian nation and Muslim women wearing burqas increased the likelihood of Islamic terrorism.
And Habiba has long worked alongside some colleagues in the region for whom everyday anti-Semitism is an unquestioned, frequently justified default position on the basis of Israel claiming itself to be a Jewish state.
What does White Supremacy mean for Muslims and Jews?
White supremacy is a “historically based, institutionally perpetuated system of exploitation and oppression of continents, nations, and peoples of color by white peoples and nations of European continent; for the purpose of maintaining and defending a system of wealth, power and privilege.” In racial justice and equity organizing, we say the purpose of racism is to inhibit cross-class collaboration for collective socio-economic mobility, to protect the political monetary interests and power of a select few.

White supremacy and racism divide people. The only way to mend those divisions is through coalition building. To do so we must first acknowledge our tensions as Muslims, Jews, and Black or Brown individuals.

Between a Rock and a White Space: Recognizing the problem
As our societies evolve, so too does White supremacy. It succeeds when marginalized communities such as Muslims, Jews, Black and Brown individuals perpetuate racism.
We internalise White supremacy in the Muslim community when we perpetuate anti-Semitism and vilify members of the Jewish community. In fact in Western Europe, those who are likely to hate Muslims are also likely to hate Jews.
White supremacy works when Jews and Muslims compete to “other” —  Canada’s  Jewish Defense League partnering with anti-immigrant or anti-Muslim patrols for instance. There are elements of both communities that bolster and enrich White supremacy as and where it benefits them. Definitions of Whiteness among Muslim polities vary enormously, although as a group Muslims are ‘othered’ to such an extent that they have elements of both race and political blackness. As Professor Khaled Beydoun writes of pre-Antebellum America, “Arabs, along with Italians, Jews and others, were forced to litigate their identities in line with prevailing conceptions of whiteness”.
As a Jewish woman of color, Dena sees White supremacy manifest itself in the Jewish community when she’s asked if she can be Jewish if her parents are not White. She also sees White supremacy manifested in a lack of understanding in regard to the nuanced political and social issues within the Israeli-Palestinian conflict and the rhetoric around who Palestinians are—that rhetoric largely being “they are terrorists and want to drive Israel into the sea.”
The March for Black Women’s Lives in Washington, D.C. was scheduled for September 30, 2017, which was also Yom Kippur, the holiest day of the year for Jews around the world. Historically, the date also fell on the 20th anniversary of the Million Woman March. The conflict in the date choice sparked intense debate and criticism across social media. After the National Organization for Women (NOW) endorsed the march, conflict and chaos led to members accusing one another of racism, anti-Semitism, and White supremacy.
On September 18, 2017, Black Women’s Blueprint, the organizers of the March issued a statement noting that September 30 is sacred because on September 30, 1919 during the “Red Summer,” Black sharecroppers organized to demand better pay from white plantation owners, resulting in white mobs murdering 240 Black organizers. The organizers also stated that they have no quarrel with Jewish women and had a high regard for the history of justice and coalition-building between Black and Jewish communities. The organizers stated that the March date was selected before they had any knowledge or realization that September 30, 2017 would be Yom Kippur.
Black Women’s Blueprint together with the March for Racial Justice and Jewish leaders issued a statement on August 16, 2017. They noted that the first date proposed was September 9th, which is the state of the Stono Rebellion, the largest rebellion of enslaved people in the United States. However, the National Park Service informed them that the National Mall was not available for September 9 but was for September 30. They explained that while continuing to move forward with the September 30 March, they were working on ways to include the Jewish community on Saturday, September 30 after sundown (the end of Yom Kippur) or on Sunday, October 1 for sister marches across the country. They stated: “holding fast to Jewish tradition was also an act of resistance, in the growing face of anti-Semitism” and spoke to the fact that the Black and Jewish relationship “transcends one day and one march.”
Just recently, the March for Black Women’s Lives was scheduled for Yom Kippur, the holiest day of the year for Jews around the world. Across social media, march organizers were criticized. Jews around the United States were not going to stop observing Yom Kippur for the march, so clearly the march organizers didn’t want solidarity from Jewish activists.
How Muslim, Jewish, and Black Activists can Collaborate
Ending White supremacy and White nationalism requires understanding their systemic, institutional, and structural underpinnings, here and abroad. When Neo-Nazis marched in Charlottesville, they weren’t just spewing anti-Semitism, they were calling for “America First” and for White nationalism and purity. When Donald Trump ran for President, many claimed that his hatred and his policies are intersectional—this is true. One writer notes that Trump made hate intersectional by rearming the working class and weaponizing them.

In short, Trump encouraged sexists to be racist and homophobic and he himself was both anti-Semitic and Islamophobic. Trump’s base did not have one single, specific targeted group. Instead, they hated black people, queer and trans people, Muslims, Jews, Mexicans, and any other group Trump disavowed. Trump was able to transform White nationalist sentiments into a cross-racial, cross-cultural, and cross-class voting base. In order to dismantle White supremacy and nationalism, our communities must do the same, but it first starts within.  Black, Jewish, and Muslim activists must first recognize the ways in which we perpetuate White supremacy while also being marginalized communities

Habiba Hamid is an editor and Gulf governance specialist. Currently in Istanbul, she co-founded Newsweek Middle East and was an editor at The National. She worked in UAE central government offices for the Rulers of Dubai and Abu Dhabi and was a researcher at Harvard’s DSG and at the LSE. She has also worked in a number of cities including Erbil, Baghdad, London, DC, Karachi and Sarajevo, primarily in aid and economic development.

Dena Elizabeth Robinson is an advocate, activist and teacher. She is a Legal Fellow with MLAW Programs at the University of Maryland-College Park.  Her writing has been published by Feministing, the National Women’s Law Center, RH Reality Check, the Colgate Academic Review, and the South Carolina Law Review.