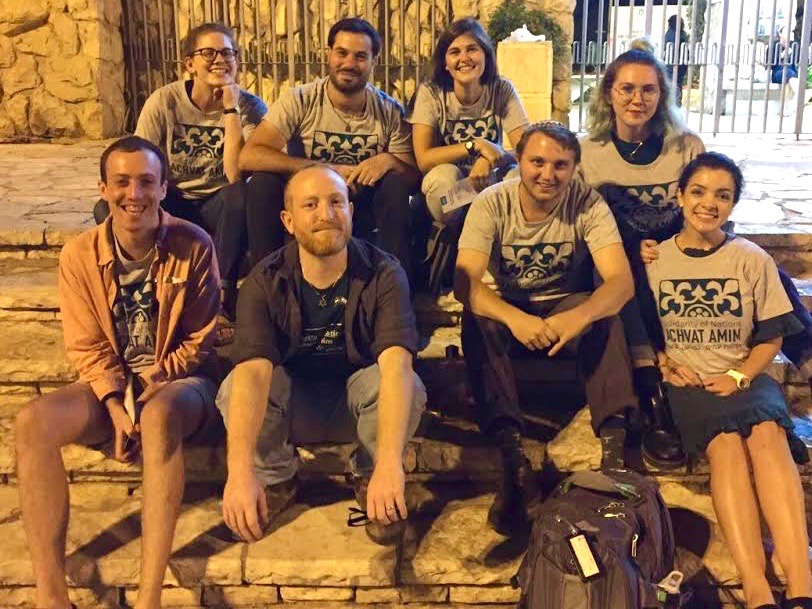 Karen Isaacs on her Journey to Achvat Amim (Solidarity of Nations)

November 2, 2017May 4, 2018 by Grace Gleason
This piece originally appeared on the American Jewish Peace Archive list serve.
While there were a significant number of progressive North American Jews who moved to Israel during the 1960s and 70s, today very few make the same move. Karen Isaacs, a young Jewish anti-occupation activist from Toronto, Canada, defies this trend. After working as an activist in Canada and New York City, she chose to move to Israel in 2011 and become a citizen in order to make change from within. As the co-founder and director of Achvat Amim (Solidarity of Nations), a five-month volunteer and educational program in Jerusalem, she facilitates learning about the conflict and the occupation for other young Jews, and provides opportunities for them to engage with local initiatives that support Palestinian rights.
The roots of Achvat Amim are deep in the Socialist Zionist youth movement that Isaacs grew up in, Hashomer Hatzair. Over the course of two interviews with the American Jewish Peace Archive in Jerusalem (in June and October, 2017 respectively), Isaacs explained that the youth movement was fundamental in instilling in her a sense of responsibility for what happens in Israel, as well as providing her with practical leadership skills and a commitment to youth leadership. She explained that because of both the historical and present day connections between the Hashomer movement abroad and within Israel, she spent a lot of time in Israel as a young person connecting with Israelis “who in some ways felt like partners or an extension of [her] own community.” Moreover, the Hashomer movement was unique in its youth education in that it did not shy away from the challenges of addressing the occupation head on. “As long as I remember being a part of Hashomer, I remember knowing about the occupation,” she explained.
Isaacs was first drawn to live in Israel-Palestine by her questioning of how to apply the Socialist-Zionist values of Hashomer Hatzair in the 21st century. A group of Canadian members became interested in how their Hashomer counterparts in Israel were experimenting with new models of urban kibbutzim. In 2006, Isaacs and several others decided to go for a year to live communally and “make connections between Jews and Arabs and do something interesting that would be somewhat helpful.” The group established a new project in Barta’ah, Wadi Ara – a town split in half by the Green Line – in a local school of Arab students. The school was “looking for ways to expand an [English] program they had started experimenting with,” and Isaacs and the other educators taught English within a critical pedagogical framework focused on identity and community.
After a year, the group went to the US and established an urban commune in Brooklyn. They lived there for four years while working locally in education, youth empowerment, and activism. During that time, reflecting on the experience of teaching in Israel-Palestine reinforced her belief that there is a unique role for Diaspora Jews in working to end the occupation, specifically on the ground. She explained: “we were able to come into that community and do something meaningful in a way that Israeli Jews couldn’t have done… offering to both Jewish and Palestinian citizens in Israel a different way of relating to Jewish identity” by virtue of the fact that the group members were Jewish but not Israeli.
In part motivated by this understanding of their role as Diaspora Jews, in 2011, Isaacs and her partner, Daniel Roth, also a member of Hashomer Hatzair, made the decision to move to Israel permanently. They founded Achvat Amim in 2012 after noting the lack of communal spaces for young Diaspora Jews to engage with peace activism and education about the occupation. In the program, participants volunteer four days a week at a local nonprofit organization, as well as teach at the Yad B’Yad (Hand in Hand) bilingual school in Jerusalem. They live communally together in a shared apartment, study Hebrew and Arabic, and participate in facilitated dialogues about the occupation, Zionism, and Judaism.
The small grassroots program unexpectedly came into media spotlight after Isaacs and Roth participated as individuals in the Sumud Freedom Camp, an encampment in the Palestinian village of Sarura in the South Hevron Hills that began in May 2017 to protest on behalf of Palestinians’ right to live in the village and build international solidarity. The right-wing group Ad Kan sent a report to MASA Israel (a Jewish Agency program that funds Diaspora Jews to come to Israel, and partially funds Achvat Amim scholarships), claiming that the program brought participants to Sumud to do civil disobedience, break Israeli law, and incite the military. According to Isaacs, none of these claims are true.
MASA was forced through public pressure to give Achvat Amim an ultimatum after Ad Kan brought their defamatory report to the mainstream Israeli media. They told Isaacs and Roth to resign as directors, or they would cease funding participant scholarships. Of course, Isaacs and Roth would not consider resigning from the program they had founded, so in September 2017 the program was defunded.
“At the end of the day,” she explained in June, “while this conflict is preventing all of our liberation, it’s much more actively oppressing Palestinians, and they’re the ones who need to be at the forefront of their own struggle for freedom, in the sense of anti-occupation work….it’s only reasonable that the people who are facing the highest consequences, the most severe consequences, be the ones to shape or to lead what action is being taken, because any action you take has an infinite number of consequences that are going to be disproportionately faced by the Palestinians who are involved.” But, “the actual practice of [acting] jointly – Jews, Israelis, Palestinians – is something that can build the movement.”