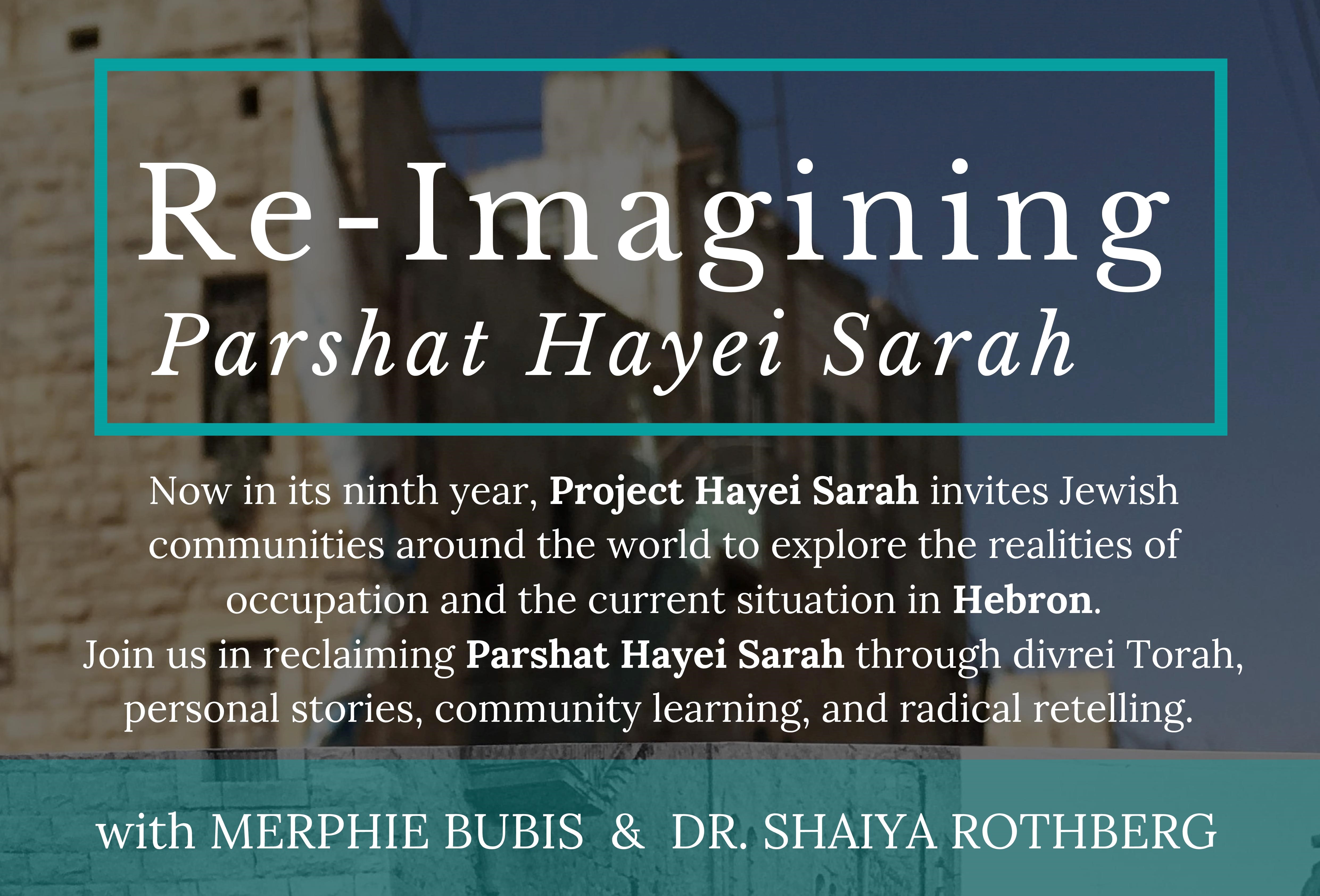 Torah and Resistance in Hebron

November 2, 2017May 4, 2018 by Frima (Merphie) Bubis
[pullquote align=right] I believe that all peoples and religions are prisms revealing unique faces of God.
[/pullquote]Last week I joined Merphie Bubis of Breaking the Silence for a pre-Chayei Sarah tour of Hebron. It was for Achvat Amim fellows and combined in spirit with politics. After Merphie’s powerful presentation and tour, we entered the tomb, and I felt a wave of energy wash over us in that ancient burial cave — mosque and synagogue. The force of what we saw in the city, Merphie’s words and the people that we met, together with the flood of religious energies alive in the stones of that tortured holy site, was for me both painful and intoxicating.
Avraham’s tomb is in the right place. It is at the heart of Israel’s religious identity and our oppression of Palestine. This is not a coincidence. Think of the holy story:
Avraham entered the land a nomad with his family. In the Land, they grow into a tribe, the beginning of a people, indigenous to Eretz Yisrael. After slavery in Egypt, they return as a nation which was both of the Land and strangers to it, and become embroiled in warfare. The story repeats in our time: Again, we return to the Land as both her children and as strangers; this time in the wake of European Holocaust rather than Egyptian slavery. And we are embroiled in war with the Palestinians, also children of the Land. Myth and history colluded to place Palestine at the heart of the religious and national meaning of Israel. Hebron is the queen of Israel’s West Bank regime.
[pullquote align=left] The lives of both Peoples of the Land hang in the balance.
[/pullquote]As painful as it is for Jewish ears, it must be said: this regime is a mechanism for the oppression and dispossession of Palestinians. It consists of thousands of brutal home demolitions; massive theft of public and private land; forced expulsion of whole communities; discriminatory legal systems with one law for Israeli Jews and one law for Palestinians; government collaboration with Jewish supremacist groups violently forcing Palestinians from their property; denial of basic resources like water and electricity; violations of the right to freedom of movement, speech and assembly; this is not a comprehensive list. We must face the truth: Israel’s West Bank regime is government of Jews, by Jews and for Jews, but ruling over Palestinians and at their expense. It is a mockery of the rule of a law and a paradigm of tyranny.
I believe that all peoples and religions are prisms revealing unique faces of God. And each has a dark side, a sitra achra, which distorts that unique face into an abomination. Our mission is to take responsibility for the darkness inside us so that we can manifest the unique face of God with which we have been entrusted. Domination of the Other in the Land is the shadow of Israelite religious consciousness. Our will to “Judaize” and dispossess, and our aspiration for global spirit and justice, are like twins struggling in the womb of the Shechinah, our Mother.
We are losing the battle. The distorted image of ourselves already wields much state power and threatens to possess our collective soul. I fear that worse is yet to come. Faithfulness to the God, Torah and the Land requires that we join the Palestinians in non-violent resistance to our own human rights violations. The lives of both Peoples of the Land hang in the balance. Only by facing this reality can we be faithful to the true mission of Israel:

In the essence of the foundational root of this people [the People Israel]…is revealed the aspiration to create a great human collective that “shall keep the way of the LORD, to do justice and judgment” (Genesis 18:19). This is the aspiration – built upon a clear and mighty consciousness and the highest and most inclusive moral imperative – to redeem humanity from the horrific burdens of spiritual and material sorrow, and to achieve for her a life of freedom filled with dignified glory and refined pleasure, in the light of the Divine Ideal, to achieve success for the human project in its totality.
— Rabbi Abraham Kook, Orot, pg. 104.

Join me on Thursday, November 9th from 18:30-20:30 at the Conservative Yeshiva, Agron Street 8, Jerusalem, for an evening of personal stories, community learning and radical retelling.