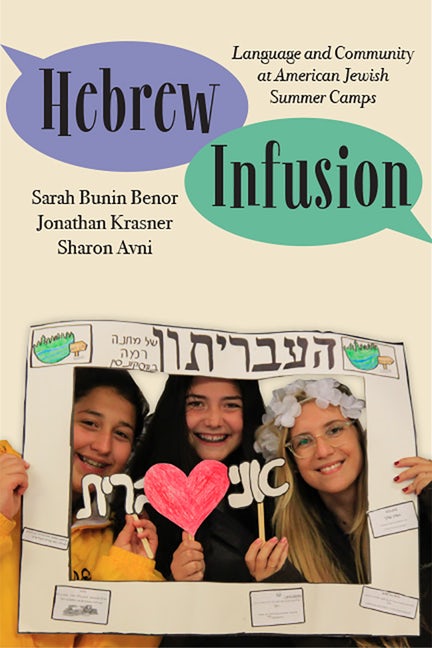 The CHE and Jewish Summer Camp

Camp Hebraized English (or CHE) may not be the Che you were expecting here on Jewschool, but it is the subject of a recent study, “Hebrew Infusion,” on the role of Hebrew in American Jewish summer camping. The book, written by Sarah Benor, Jonathan Krasner, and Sharon Avni, explores “the social, economic, and cultural condition that created this wholly American diasporic register and why ideology about language supersedes language fluency,” as well as why there is a fork in mazleg!

If that joke doesn’t resonate, I wouldn’t suggest picking up this book. However, if you chuckled or (more likely) groaned, read this book. If you, like me, spent time at camp as a camper, staff member, senior staff, lay leader and a parent (you know, if we ever go back to camp), the book provides an academic exploration of a seemingly organic but very deliberate aspect of the most formative Jewish experience in American Jewish life.

For me, it seemed like CHE at camp was always just there. With the exception of my first camp experience at YMHA Camp Nah Jee Wah, my nearly 20 years of Jewish camping always had bits and pieces of Hebrew sprinkled into daily life. And it’s possible that I don’t remember the CHE from my years at Nah Jee Wah, because I was going into third and fourth grades, and was focused on getting to sail at the lake.

But when I went to Hilltop and Alonim, it was clear that Hebrew was going to be a part of our vernacular. The lexicon was limited to nouns and camp activities, but it was everywhere. Alonim, known throughout the land as the dancing camp, used tons of Hebrew words in English sentences and enjoyed hundreds of “Israeli” dances that were choreographed in Southern California exclusively for Alonimers. We absorbed CHE as the vocabulary of camp, in the same way that I learned to speak football during “two-a-days” and “hell week.”

The goal of Hebrew language infusion, write the authors, is to help campers develop an ideology about Hebrew, not to actually speak it.

“Infusing Hebrew to forge communal and transnational connection presupposed that these connections only require a nominal and symbolic acquaintance with Hebrew, and it assumes that English is insufficient to meet this purpose, despite the fact that the vast majority of Israeli Jews and Jews throughout the world speak English.” (3)

CHE served as a signal that Judaism’s language was important to support the “imagined community” of international Jewry (ibid). It’s less about learning a functional language, the authors argue, but rather helping campers and junior staff understand that Hebrew, the language of the Jewish people (not just Israel) was worth knowing, and valuable enough to integrate into daily lives.

The book divides its pages between the past as foundation and the present as the real time development of CHE.

A particularly interesting dynamic explored in the foundational section compares the rise and fall of Massad camps and sustained growth of the Ramah camps. Massad, a fully immersive Hebrew language camp thrived in the North East for nearly a generation. However, its decline, tied to lack of interest and lack of qualified campers and staff, was due in part to its rigid goal: creating a living cultural and political Zionist experience in the United States. Massad required campers and staff to speak in Hebrew, which was the point of the camp.

Ramah, which started as a Hebrew-speaking camp, had different goals and was able to adapt to these same challenges and move to an infused camp. Ramah’s aim of building Jewish American leaders did not have a Zionist mission, at first.

Generations later the mainstream American Jewish experience includes fostering ardent Zionists, and camp programming reflects this fact. Fifty-one percent of those interviewed by the authors felt the use of Hebrew at camp “very important” to enable campers to connect to Israelis and the state of Israel. However, we also see a growing divide between Jews within and outside of the state of Israel regarding pretty much everything. Could we see a decline in CHE used in more progressive camping institutions?

The most interesting chapter in the second part of the book paints a complex picture of the limited role of the Israeli in the camp culture. This chapter doesn’t review actions, language use or educational choices, but rather is a study of the use of people as an educational tool. Often camps engage in an Orientalist view of the Israeli as a stagnate figure of Jewish strength to be observed and perhaps simulated during Yom Yisreal type activities. They aren’t there to teach Hebrew—modern, textual or camp varieties. The Israeli is cool. The Israeli is sexy. The Israeli wears a bucket hat and farms dates. The Israeli is used to connect to an Israeli culture that is as much a creation of establishment Jewish life in America as that “wholly…diasporic register.”

Does widespread use of CHE lead to this simplified view of Israeli culture and people, exacerbating the disconnect between American and Israeli Jews? The authors don’t get into that, but I’d say it seems unlikely. The discontent is likely fueled by the Occupation of Palestine and the radical rightwing government in Israel.

What the book makes clear is that CHE is neither modern Israeli nor textual Hebrew, and it serves a very different purpose than a full language. CHE enables campers and staff to build a distinctly Jewish camp culture with elements of a mainstream Jewish culture. This will include Israel, which is “totes sabbaba.” But this culture likely will include Guster, The Marvelous Mrs. Maisel, Julian Edelman, Ryan Braun and Alex Bergman jerseys, (unfortunately) Seinfeld jokes and a camp-based language, which in this case is built from Hebrew.

Anyway, read the book to learn how to get that fork out of your regel.