On Friday, July 15th Youth Against Settlements brought together around 85 people including members of All That’s Left: Anti-Occupation Collective, participants in the Center for Jewish Nonviolence “Occupation is not my Judaism” delegation, and others. The aim was to clear out an old factory on private Palestinian owned land in order to build a cinema on Tel Romeida, one of the most violent places in Hebron and thr 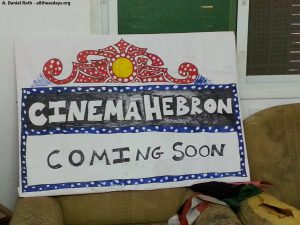 oughout the occupied territories. The cinema will be the first there in decades. During more than two hours, the volunteers from the community and around the world cleared much of the site. The #CinemaHebron project continues for the people living under occupation there, and the people standing with in solidarity from around the world.
You can read more about it in +972 Magazine, The Forward, Haaretz, Maan, the JTA, More from The Forward and in this post and this one and this one.
Much of the day is chronicled in these photos and videos.


The march through Hebron.