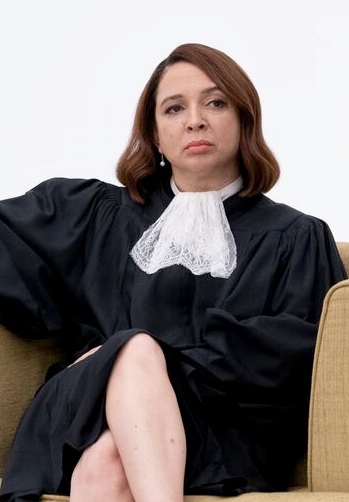 Thought I saw an eagle
But it might have been a vulture,
I never could decide.

NBC’s smash hit series The Good Place, which ran from September 2016 until January 2020, is a charming, quasi-philosophical comedy about the difficulties of living an ethically responsible life in the contemporary world. After the morally-questionable protagonist, Eleanor, accidentally ends up in the wrong afterlife, she and her “good” friends set out to learn how, exactly, it is decided who is granted entry to the Good Place: a colorful, cheery town where frozen yogurt shops abound. The crew soon discover not only that the technicolor village is fake, its inhabitants actors from the Bad Place, but also that no one has successfully entered the Good Place in over a century—including the adorable, ostensibly flawless ethics professor Chidi—because the contemporary world has made it virtually impossible to make purely good decisions. Every act, such as the simple, seemingly trivial act of buying a tomato at the grocery store, Ted Danson’s character Michael explains to Judge Gen (whose robe was inspired by Judge Ruth Bader Ginsburg’s, according to Maya Rudolph), sets in motion a series of ethical choices that are not immediately detectible to the average human shopper. Each conscious decision contains within it a cluster of unconscious decisions: even when we mean well, our actions have effects that exceed our intentions and awareness.

MICHAEL: “Life now is so complicated, it’s impossible for anyone to be good enough for the Good Place… these days, even buying a tomato at a grocery store means that you are unwittingly supporting toxic pesticide, exploiting labor, contributing to global warming. Humans think that they are making one choice, but they’re actually making dozens of choices they don’t even know they’re making!”

JUDGE: “Your big revelation is, life is complicated? That’s not a revelation, that’s a divorced woman’s throw pillow.”

The show’s irreverent, playful humor superficially alludes to a problem that is much more complex than a throw pillow, and dates back millennia. In the parsha we read annually at Rosh Hashana, we recall the dreadful choice forced upon the Jewish patriarch Abraham: faith in God or loyalty to his son, Isaac. Year after year, we are horrified not only by the idea of a God that would ask us to sacrifice our child, but also by the notion that we might comply, and that this murderous act might be considered ethical. We know that each relationship (with God, with Isaac) is considered elevated, holy, because Abraham responds to the call of each using the expression hineni, expressing not so much a location (“Where are you?” “Here I am, in the next room”), but rather a spiritual or ethical openness or readiness to the call of the other (“Father?” “I am here [for or before you]”).

What kind of ethical dilemma is this? How are we to interpret the terrifying choice between demonstrating obedience to the divine, on the one hand, and protecting the life of one’s child? In addition to the myriad rabbinical arguments about the lessons of the near-sacrifice, the philosophical tradition, too, has engaged with Abraham’s conundrum. Søren Kierkegaard (Fear and Trembling), Emmanuel Levinas (Proper Names), Jacques Derrida (The Gift of Death) have offered different, even contradictory lessons we are to draw from the biblical parable. In my recent book Anarchaeologies: Reading as Misreading, I detail the competing philosophical interpretations of the binding of Isaac. While Kierkegaard understands the story as the privileging of faith (in God) over ethics (to Isaac), Levinas sees in the successive expressions of hineni (to God, to Isaac and, finally, to the angel of God) an attentiveness to the voice that will ultimately call off the sacrifice. Derrida, finally, underscores the aporetic quality of Abraham’s dilemma, a double bind (akedah, after all, means “binding”) in which “ethics must be sacrificed in the name of duty” (67). Abrahamic ethics, for the deconstructive thinker, implies a paradoxical responsibility/irresponsibility.

Jewish-Canadian musician Leonard Cohen imagines a similar undecidability at the core of ethical experience in his song “Story of Isaac.” In this haunting song, the biblical tale is told from the perspective of the son, who views his father as simultaneously terrifying and holy. Through Isaac’s eyes, we witness the complexity of the patriarch, whose “scheme” or “vision” comes from a “demon” or a “god.” As they ascend the mountain, Isaac recalls, “Thought I saw an eagle/ But it might have been a vulture/ I never could decide.” Through these haunting verses, Cohen is able to capture something at the heart of what troubles us about the parable: we can never fully decide which action is correct, we will never have a guarantee that our decision will have been ethical, whether we will have murdered or saved the other. Indeed, Derrida suggests, those utterly confident in their behavior—moralists and moralizers—might even behave the least ethically of us all!

Recent debates over school re-openings reveal a similar ethical paradox. But this is not merely because we can think of two competing ethical imperatives—either protect the physical health of the teachers, staff, students, and the surrounding community, or protect the mental and intellectual health of these same students—in which one must make a calculation to determine the least damaging option. No: the reduction of ethical responsibility to a calculation itself reproduces the violence of a society that turns living beings into quantifiable sums.

Instead, let us imagine the ethical imperative to guard and care for one another as impossible. This does not mean that we cease to care for one another: if anything, it turns the ethical imperative of care into a task so difficult that we must give it our undivided attention, like a New York Times crossword puzzle, a particularly opaque passage in a novel, a perplexing math problem. The mathematician, the reader, the puzzler does not surrender, but rather throws herself into the task.

In the case of the school openings and closures, when we pay painstakingly close attention to the competing demands voiced by parents across the socio-economic and political spectrum, we begin to see that the problems cannot be reduced to the two sides that seem to have coalesced. The structural inequities that haunt our educational system are revealed to be not a secondary issue to be resolved, a side effect, but rather as constitutive of the very system they paradoxically uphold. Careful attention to these competing demands results in the multiplication of demands: the immediate challenge that the COVID-19 crisis poses ends up exposing long-term, deep economic and racial inequities as well as a pervasive mental health epidemic, much of which—it could be argued—is exacerbated as capital is increasingly concentrated in the hands of the few.

And yet, we are faced with concrete choices to be made: judgments, decisions, elections. Perhaps if we move past the either/or choices presented to us (physical or mental health, teachers or students, God or Isaac, center-left or neo-fascist, etc.), if we acknowledge what possibilities and struggles are excluded from these false dichotomies, as well as the terrifying violence of our decisions, we can begin the work of rebuilding a world in which we might, just might, act ethically from and through our undecidability, our incompleteness, our vulnerability, and our utter dependence upon each other. Like the characters from The Good Place, we can only do this together.