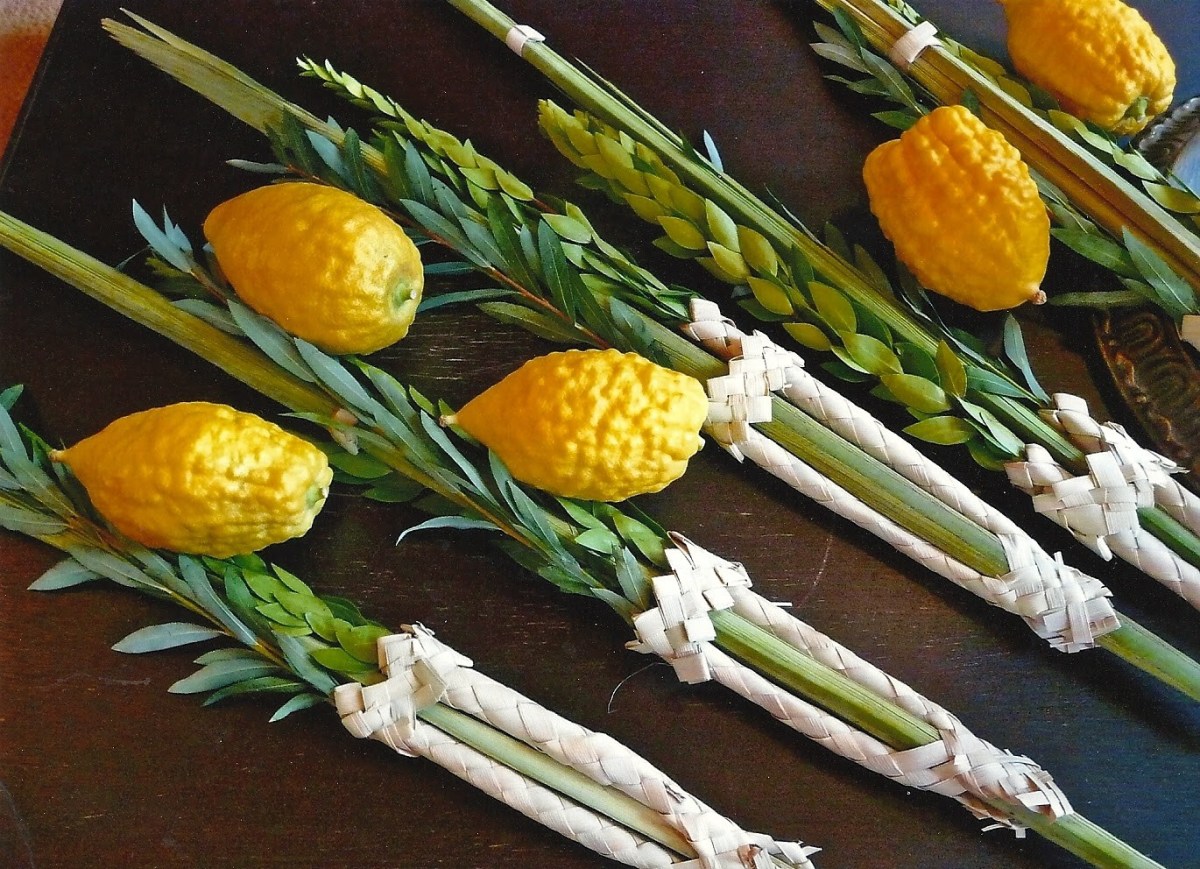 Sukkot: The Joy of Abundance Where We Might Feel Scarcity and the Joy of Second Chances

The author, the National Jewish Educator for Avodah, originally wrote this for the Avodah Service Corps.

The Festival of Sukkot is about closure. It arrives dramatically as the culmination of not one but two holiday cycles, the Three Pilgrimage Festivals, and the High Holidays. Every time the Torah lists the pilgrimage festivals, it is in the order of Pesach, Shavuot, Sukkot, with Sukkot marked as closure. For example, just after Revelation at Mt. Sinai, Exodus 23 introduces the three festivals as the agricultural cycle, calling Sukkot “the Festival of Gathering at the end of the year, when you gather in what you’ve done from the field”. While Scripture doesn’t especially link Sukkot with Rosh HaShanah and Yom Kippur, Jewish experience certainly does, framing this as “the holiday season”, and custom and law link them, such as the legal instruction to start building a sukkah the night Yom Kippur ends (Shulhan Arukh, OH, 625:1). Sukkot is where everything comes to a head: in Rabbinic language, it is simply referred to as “The Festival” (“HeHag/החג”). On the academic calendar, this may feel like the beginning of the year, but in terms of the food system and agricultural cycle, this is the end of the year; that is how we should understand this most ecology-oriented holiday. Sukkot is the culmination and its focus is water: “At four times, the world is judged:….and on The Festival, it is judged for water” (Mishnah Rosh HaShanah 1:2). What does it mean for the planet to be judged for water and what feelings and actions does this sacred theater challenge us to bring into focus?

One of the main commandments for Sukkot is to bring together four plants and wave them around daily. “And you shall take, on the first day, the fruit of a stately tree, fronds of palm trees, a branch of a leafy tree, and willows of the brook, and you shall rejoice before YHWH your God seven days” (Leviticus 23:40). These species, which become defined as the etrog, lulav, hadasim, and ‘aravot, respectively, have been impued with myriad frameworks of symbolic resonance throughout the ages, but the core meaning of these species is the healthy, balanced, and abundant ecosystem that results from good rainfall. The Jewish Renewal eco-Hasidic scholar, Rabbi David Seidenberg, writes as follows (“The Shaman’s Rainstick”):

“Each of these species represents one of the primary habitats of the land of Israel: the desert, the mountain, the lowland…and the river or riparian corridors. Each of these types of habitat is distinguished by how much rainfall and how much groundwater are found there. Together, the four species make a kind of bioregional map of the land of Israel, and they each hold in greatest abundance the rains that fell where they grow in the year that has passed. That’s why the tips of each species…cannot be dried out: it would be like praying for good health while eating junk food.

Bringing these four species together, we wave them in all directions around us, up and down, praying that the coming year will again bring enough water for each of these species to grow and thrive, and with them all the species of each habitat….We are praying, fundamentally, for the climate, for the stability and sufficiency of the rain and sunshine, on which depend every being living upon the land….

How can we make our prayers heard? We can make them heard by hearing them ourselves. When we pray for abundance and sustenance while living in ways that destroy our climate, it is like praying with a dried-out lulav, or worse, praying for health while eating not just junk food, but poisons and toxins. We need to pray for abundance and sustenance, but we also need to pray for the wisdom and ability to act consistently with our prayers, to change how we live so that we might live sustainably on the earth.”

The culmination of an ecological and metaphysical drama through water on Sukkot finds expression in another ancient Sukkot practice, the water libation which was reserved for this Festival. At the very end of the dry season, before we have even begun praying for new rain (at the end of Sukkot), when we may, anxiously, be down to our last rain stored from the previous winter, our ancestors would ceremonially, and with a great crowd, perform a ritual dumping of the water on the altar, demonstrating communal faith that just as we have nurtured the crops responsibly, stewarded the ecosystem, and stored water, God will keep God’s part of the covenant and provide ample rain. This is the joy of the Sukkot: our physical and spiritual ecosystems are so in balance that times of scarcity can faithfully be experienced as promises of abundance. The Sages tell us that “Anyone who never saw the Celebration at the House of Water-Drawing (Simhat Beit HaSho’eva) never saw celebration in all their days” (Mishnah Sukkah 5:1). The celebration around the water libation was the bangingest party around, with the whole city illuminated in bright lights, wicks made from the priests worn-out underwear (ibid, 5:3), a Levite funk band (5:4), rabbis and scholars juggling eight lit torches, knives, glasses of wine, and eggs, doing two-finger-handstands, and other fabulous gymnastic feats (Talmud, Sukkah 53a). There is no greater joy than experiencing the planet in harmony, allowing us the faith and confidence to trust in abundance despite momentary scarcity.

You may be thinking what I’m thinking: So how do we celebrate Sukkot today, when we’ve destroyed our ecosystems, when 2.2 billion people lack sufficient clean water and the planet is faced with both unprecedented drought severity and increasingly frequent and severe hurricanes? Let’s look at the commandment to dwell in the huts that give Sukkot its name. The Torah explains that we are commanded to dwell in the sukkah “in order that future generations will know that I made the children of Israel live in booths (sukkot) when I brought them out of the land of Egypt (Lev. 23:43)”. This is bizarre, since, in the narrative of the exodus from Egypt, the Torah makes no reference to booth dwelling. This peculiarity led to the famous Talmudic opinion that the “sukkot” mentioned refer not to physical booths but to the divine clouds of glory that protected the Israelites in the desert (Talmud, Sukkah 11b). Be that as it may, if our physical sukkot represent the Clouds of Glory in the Exodus, why do we commemorate Sukkot in Tishrei, and not in Nissan, the spring month during which we left Egypt?

The great 18th Century scholar known as the Vilna Gaon (Commentary to Shir HaShirim 1:4) explains that God withdrew the protective Clouds of Glory after the sin of the Golden Calf and restored them when the Israelites built the Mishkan (Tabernacle):  our safety comes through living righteously and in alignment with our values. Since the Rabbis teach that it was on Yom Kippur that Moshe brought down the second, reconstructed, set of tablets of the Revelation (Talmud, Ta‘anit 30b), and that the next day, the 11th of Tishrei, Moshe gave instructions for the building of the Mishkan, and that the people brought voluntary contributions toward the beginning of the construction “by morning, by morning”— the 12th and 13th (Exodus 36:3)—and that the next day, the 14th, each craftsman took his portion of gold for the building, therefore, the actual construction of the Mishkan began on the 15th of Tishrei, the first day of Sukkot. Sukkot, then, marks the advent not of the original Clouds of Glory, rather, of the second, restored Clouds, the intimate protection from God that we earned back after having lost it once.

Sukkot is the Festival of Second Chances, the day when we celebrate the physical and metaphysical reality of the possibility of abundance and protection if only we right our wrongs. It’s the day to affirm that all is not lost, if only we translate the cleansing intentional repentance of Yom Kippur into our practical, physical, ecological, political life.