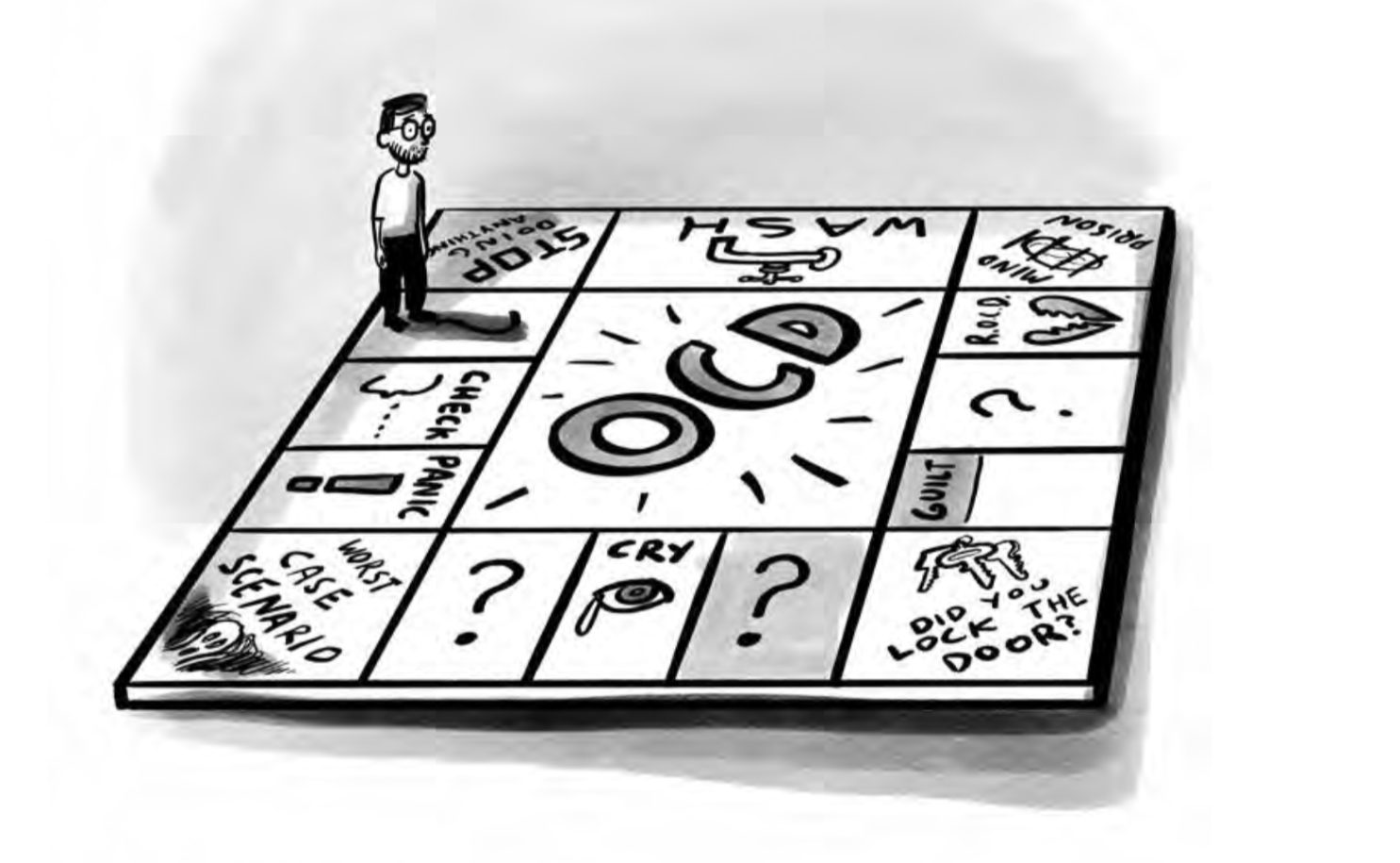 “I Am an Anxious Cartoonist”: An OCD Awareness Week Conversation with Jason Adam Katzenstein

Scroll through the hundreds of cartoons that Jason Adam Katzenstein has drawn and posted on his popular Instagram account and you’ll quickly notice a theme. There’s an executioner lying in bed, trying to remember if he locked his dungeon. A happy-looking chess piece on Zoloft. A fire hydrant worrying that everyone hates it. A coffee cup thinking, “I make myself anxious.”

For Katzenstein, anxiety is both a source of creative inspiration and one of great personal turmoil. In his new graphic novel, Everything Is an Emergency: An OCD Story in Words and Pictures, he documents his struggle with obsessive compulsive disorder since childhood. “I understand why I should isolate and unmask obsessive thoughts. It does take away some of their power,” Katzenstein writes. “But I’ve always identified so reflexively with my creativity. I am a cartoonist. It’s an identity I have trouble extricating from my anxiety. I am an anxious cartoonist.” (As someone with obsessive compulsive tendencies, the book struck a chord with me. Since kindergarten, when I first learned how to write and became fixated on my penmanship, I’ve been called a “perfectionist.” I once tried exposure therapy, something that Katzenstein also tried, to get a handle on my own anxiety.)

J.A.K., as he signs his work, may be best known for his brilliant New Yorker cartoons, but he is much more than an “anxious cartoonist.” He has written for television shows, including Ben 10. He is a visiting professor at Wesleyan University, his alma mater, where he teaches a comics class. He works with the Jewish activist group IfNotNow, drawing posters and participating in actions against Immigration and Customs Enforcement. And he recently announced on Twitter that he will edit a comics site that’s part of a new journalist-owned publishing cooperative called Brick House.

Over the summer I spoke with Katzenstein, who is 30 and lives in Brooklyn, and checked back in with him this week, which is OCD Awareness Week. We talked about the book, his progressive Jewish values, and why he avoids drawing Donald Trump. The conversation has been edited for length and clarity.

Everything Is an Emergency is a bracingly honest, sometimes funny but often painful examination of how your OCD controlled you for so long—you describe how your days were “circumscribed” by it—and then how you managed to wrest that control back through therapy and meds and support from friends. Why did you decide to write this book? What did you want to achieve?

I started the book in 2018 when I was doing exposure and response prevention therapy. Working on the book was a way to hold myself accountable to that therapy work. I was feeling a bit afraid but also quite hopeful, and I realized that I had a few stories to tell that I hadn’t seen before.

I used to be more embarrassed and ashamed about my OCD. I’ve learned to speak more openly about it, and the people in my life have been very understanding. In making this book, I wanted other people to feel less alone if they’re going through some of this stuff, or maybe if they have someone in their life going through this stuff. I hope it gives insight into what’s going on inside the brain of someone with OCD.

Your book came out a few months into this pandemic, when even folks without OCD have been experiencing heightened anxiety around cleanliness and personal safety. How have you been managing?

I feel healthy and safe. I feel very, very lucky. But I definitely have flare ups surrounding the pandemic. They’re less about contamination than I might have anticipated and more about guilt and responsibility, like, Am I standing far enough away from this person? Am I going to make this person sick?

A lot of the tactics that I’ve learned to deal with my OCD can be applied to other types of anxiety, so what I’ve been trying to do is be helpful to friends who might be new to feeling a tremendous amount of anxiety. [On Sunday, at the start of OCD Awareness Week, Katzenstein tweeted: “If you are struggling with OCD, you can always DM me. I’ve been doing okay for a bit, and I’m here to listen and help if I can.”]

Can you talk a bit about your artistic process for creating this book? I would also like to know why you decided to do it in black and white.

I drew on an iPad in an app called Procreate. When I’m doing art on my laptop I use Photoshop and InDesign, but I like Procreate on the iPad because you can take the pencil and draw directly on the screen. I downloaded some custom brushes to use in the app. The writing I did in a Google doc. I would write when it felt like it should be prose, and then the words and images would talk to each other. Most of the stuff in this book was redrawn and rewritten numerous times. I think that I redrew just about every single image in this book.

In your book you talk about the first time you pitched cartoons to Bob Mankoff, the former cartoon editor of The New Yorker with the luxurious white mane. You write, “I have a portfolio under my arm, and the one thing I know is that I’m an impostor who doesn’t belong here.” How long did it take to get over that feeling?

I think that I’ve never really gotten over that feeling, but I’ve accepted it and I feel comfortable with it. The way I used to engage with that was I would argue with it, like, No, you deserve this! But who knows what we deserve? I kind of had to make peace with the fact that there might be times where I don’t feel like I belong in a particular room, but I might just keep ending up in those rooms and it will be humbling and that’s okay. I can just not feel distressed at this feeling. I can just be like, Hello, old friend.

Who are some of your favorite cartoonists?

I really love Lisa Hanawalt. She made this incredible book, My Dirty Dumb Eyes, and is a producer on BoJack Horseman. I also love Kate Beaton, Mort Drucker, Jack Davis, and Harvey Kurtzman. I’ve loved Al Jaffee forever. I met him once at a cartoonists’ party. He was the spryest 90-year-old I ever met.

I think Eli Valley is a genius. Sometimes it can be difficult to look at some of that work, just because he is really fluent in the history of antisemitic tropes, and so there’s a lot of pain there. He’s a pretty unflinching, polemical cartoonist. He can draw peoples’ cruel hearts.

You are very outspoken about your political views on Twitter, while your cartoons—specifically your New Yorker cartoons—tend to be a bit tamer but no less incisive. How do you balance your politics with your art?

The New Yorker has a readership that expects a certain thing. The magazine publishes a lot of work that I think is courageous, but what they don’t do is let me just completely ventriloquize my exact opinion. That’s just not their style. I like trying to go up to that line, but I think that Twitter is really the area for, “Fuck this person!”

One thing I’m afraid of is the anesthetizing effect of being an artist. I never want to confuse speaking through art with affecting change. It’s not that I don’t think art ever changes hearts and minds or spurs people to action, but I do think the role of art can be inflated by the artist. I’m just looking around at the world and saying what’s on my mind. I think about who’s looking at my work, depending on where I’m publishing, and what might lead to a discussion that I think is worth having. But I want that never to feel like an action.

I’ve noticed that you don’t draw Donald Trump that much. Why is that?

I will on occasion draw him, but I feel pretty uncomfortable about this ecosystem where more people will click on cartoons of him because he’s a showman and people are watching the show. I don’t want to contribute to the show. He’s this ridiculous, oafish person. It’s very difficult to make work about somebody when you can’t top the ridiculousness of how they talk and behave. But he’s also a Nazi, and I don’t want to make money off of illustrating things that he says. I’ve been guilty of it for sure. All of the cartoonists are soul searching about this. 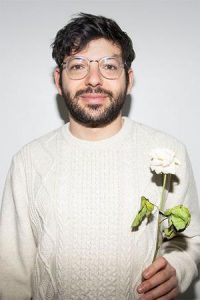 What does your Judaism mean to you? How have Jewish values informed your work and activism?

I went to Jewish day school in L.A. until the fifth grade. I had a bar mitzvah, but I always felt a little alienated. I celebrate the holidays with my family, but I think that what really is important to me is the cultural inheritance of being a Jew. When I moved to New York, I started to feel a kinship with the Jewish left and became really interested in the history of Jewish immigrants coming here. I work with IfNotNow, and I just remember going to this I.C.E. detention facility in Jersey and saying some prayers and seeing these brave volunteers who blocked the entrance and just feeling proud to be a Jew.

I do feel that there are certain things that, as a Jew, I need to say louder than other people. As Stan Lee wrote in the first Spider-Man, “With great power comes great responsibility.” The thing that I love most about being a Jew is the sense of community and solidarity in fighting for the most vulnerable among us. That’s a sentiment that must extend to people who aren’t Jews but belong to communities that are vulnerable. It’s my responsibility to be on the front lines fighting for Palestinian rights, fighting for trans rights—this stuff feels pretty inextricable from what I like best about the Jewish tradition.

Amen. What’s next for you?

I’m doing some more T.V. writing that I can’t really talk about yet. I would like to make another book. I love wrestling with something that’s long and ambitious, and I would like to do that again. I still pitch The New Yorker every week. It’s nice to have something to do. I’m also thinking about getting a dog.

Andrew Esensten is a freelance journalist in Northern California. Previously, he was a staff writer for the English-language edition of Haaretz based in Tel Aviv.
All images courtesy of Jason Adam Katzenstein.