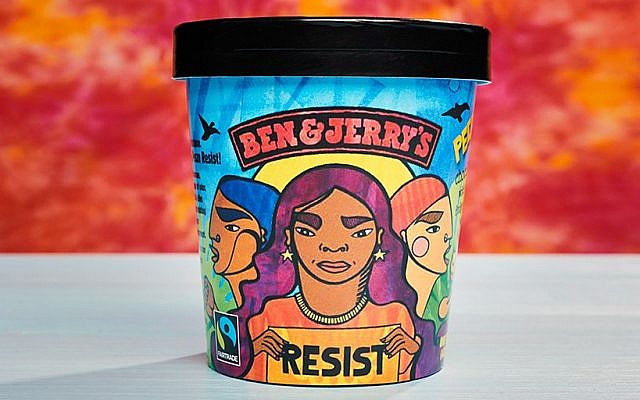 July 23, 2021July 29, 2021 by guestpost
Mik Moore is the CEO of Moore+Associates, a creative agency based in New York City that works with political campaigns and non-profit organizations.

On June 19, 2021, Ben & Jerry’s announced that they would no longer sell their ice cream in West Bank settlements. The BDS movement, which had been pushing Ben & Jerry’s to live its values by boycotting Israel, applauded what they saw as an important half-measure. Israel, and a wide range of American Jews… had a meltdown (this will be my only ice cream pun, I promise).

To close observers of Israel / Palestine and American Jewish politics, the reaction was somewhat unexpected. Ben & Jerry’s is an activist brand, founded (but no longer still owned) by two Jewish hippies from Vermont. It had rejected a boycott of Israel. It had reaffirmed the desirability of two states for two peoples, which only recently had been a criteria for participation in a center/right rally against antisemitism at the Capitol.

Once upon a time, collapsing the distinction between Israel (inside the Green Line) and the occupied territories (outside the Green Line), was a rightwing move. If the Green Line is irrelevant and Israel is one state, from the river to the sea, then it is not a democracy. Those clinging to the (today, largely obliterated) Green Line did so in order to, in part, justify the ongoing failure to grant Palestine sovereignty. So, what was happening? Why were so many pro-two-state centrists and liberals condemning the withdrawal of Ben & Jerry’s from the settlements as an act of antisemitism? Why were they treating a boycott of the settlements as if it were a boycott of Israel?

Part of the answer is simple.  We humanize the Jews living in the settlements, because many of us know them. We think of them as good people with perhaps different politics; we don’t think of them as oppressors. We suggest that they are pawns, disconnected from the people in charge of settlement policy. And therefore we don’t think they should be deprived of Ben & Jerry’s ice cream, or anything else fully human people want.

Among those who don’t see every criticism of Israel as an act of antisemitism, it is this flattening of any distinction between settlers and non-settler Israeli Jews driving their accusations of antisemitism. Ben & Jerry’s is targeting JEWS, Jews we know, Jews who are good people (often devout people), and targeting them because they are Jews. Not, of course, targeting them because they are doing something bad by living in a settlement. Or, more precisely, targeting an oppressive system (occupation) by refusing to be complicit in normalizing it.

Of course, this is bullshit. I completely understand humanizing settlers. But the notion that they should be absolved for their decision to live inside of Palestine, on occupied land, in a system that deprives millions of Palestinians of their human rights… absolved because the government incentivized living in the settlements, told them it was patriotic to live there, made it easy for them to avoid even looking at Palestinian homes or cars or people while they lived there… no. Where does Judaism teach that individuals should not be held accountable for their actions, that individuals can’t tell right from wrong, that individuals have no agency?

One of the lessons of history is that people we like, people who are generous with their friends and are fun to have over for dinner, people who are well read and funny and caring… are also often complicit in systems of oppression. And that those systems would collapse BUT FOR THEIR COMPLICITY! If the settlements didn’t have any of these so-called “non-ideological” settlers, Israelis just trying to live the suburban dream; if there was a true stigma to living there… many fewer people would live there. And without settlers, it’s hard to have settlements. And with many fewer settlements, the occupation would look much different, and the cost of territorial compromise would look much different.

I am not saying all Jews should cut off their friends and family who live in settlements. I am saying Ben & Jerry’s should cut off our friends and family, as should all institutions, and artists, and any others currently providing goods or services to settlements. Living in a settlement should be stigmatized, just as we should stigmatize sitting in the front of a segregated bus, or shooting yourself into space in a giant phallus for 10 minutes. Doing so is an expression of our values; even, yes, our Jewish values.

I think the question of whether or not individuals who oppose the occupation should visit people we know who live in settlements… or use roads built just for settlements… or otherwise treat the occupation (and the occupiers) as normal… is up to each of us to decide in a way that best reflects our values. Personally, while I do maintain some relationships with people who engage in behavior I find objectionable, I also do my best to avoid becoming complicit in (or signaling my tacit approval of) their activity by refusing certain activities.

I’m old enough to remember when settlements were aberrant. Today they are not. This is due, in part, to how many Jews in and outside of Israel have relationships with settlers and fail to stigmatize their decision to live there. Because they deserve to be shamed and shunned and not to have easy access to delicious Vermont ice cream.