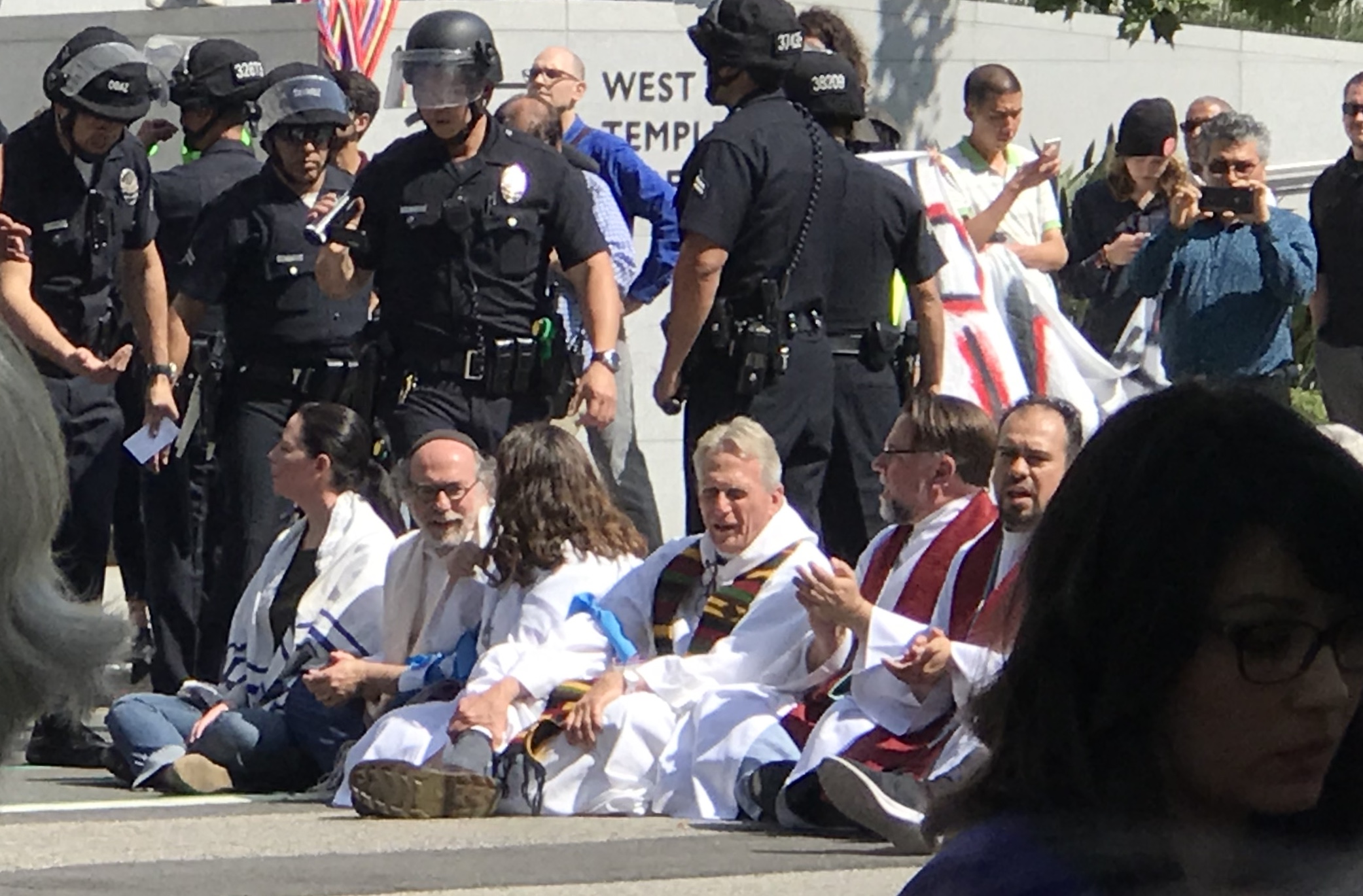 Do the Good and the Just: An offering to the Jewish social justice movement

Rev. Michael-Ray Matthews told me this story. During the Ferguson protests a group of clergy who were there to support the protestors were dismayed that the protestors in the street were not interested in traditional clergy leadership, nor in coming to church. They met to discuss what they could do. During the conversation, Rev. Traci Blackmon said: “These children are making church in the streets. They don’t need our walls.”

I am a rabbi who creates sacred spaces in the streets by organizing and participating in nonviolent multifaith protests against injustices of various kinds. Whether its organizing a Passover/Easter/Lailat al-Miraj action at the Metropolitan Detention Center; or a Hanukah/Christmas posada action at the Mayor’s office and the LAPD; or shutting down a major thoroughfare in Downtown Los Angeles to protest children being separated from their parents at the border and held in cages—I am a street preacher activist who uses the texts and the rituals of Judaism to create morally compelling spectacles which are intended to impact the political conversation and the policy outcomes.

In this sense, I resonate strongly with Rev. Blackmon’s idea that the children are making church in the streets.

At the same time I would argue strongly that there is more. In sum, my argument is that for Jewish organizations and activists who see themselves as part of the social justice movement as Jews, there is a lot at stake in preserving Jewish liturgy and practice in both political theatre and expression, and in organizational and movement culture. (I am intentionally not discussing personal religious belief or expression.) At the end of the day, the movement away from the particularities of Jewish practice toward a nondescript (and therefore less particularistic, perhaps) spiritual expression is, I am arguing, an expression of (White) Christian hegemony. (White) Christian hegemony is a backbone of white supremacy. These organizational and movement practices therefore, inadvertently contribute to white supremacy culture.

There are many Jews who are involved in movements for social justice, and by that I mean also movements for racial justice and the struggle to dismantle white supremacy. The questions of racial justice, white supremacy, and anti-Black racism are all embedded in the various inequities that plague our country—poverty, immigration rights, antisemitism, mass incarceration, police violence and abuse, women’s rights, reproductive rights, and so on.

While Jews in these social justice movements understand the relationship between white supremacy, anti-Black racism, and other social justice issues, they often do not understand how all this relates to Jewishness, or more specifically, to Judaism. Many Jews in social justice movements have a vague idea of the historical connections with the labor movement, or the immigrant rights movement. There is also that  ubiquitous photo of Rabbi Abraham Joshua Heschel marching with Dr. Martin Luther King Jr in Selma in 1965. However, many (most?) of those who laud Heschel’s statement after the Selma march: “I felt like my legs were praying,” do not themselves engage in Jewish ritual practice. While holding signs that cite the biblical passage, “Justice, justice, you shall pursue,” those activists and activist organizations often do not have any deep connection to Judaism as a living religion of practice.

There is a history to this, of course. Reform Judaism, the Jewish movement which, in the United States embraced most wholeheartedly the ideals of the civil rights movement, descended from the German Reform movement. The Reform movement in Germany was a movement which embraced Germanness, that is whiteness. That is, in the nineteenth century Jews were fighting for emancipation. The way that they sought to achieve such inclusion was to declare that they were fully German, and part of that program was to make Judaism reflect the Protestant ethos of their time. They thus excised from their religious practice what they considered the unfortunate primitive aspects of Jewish law, thus claiming to “civilize” Judaism. (My apologies to my historian friends.) This is the Jewish form of respectability politics.

However, in America there is also a danger to this. White Christian hegemony, the unspoken assumption that “religion” is Christian, and other religions—Judaism, Islam, Sikhism, Buddhism, or any of the other hundreds of religions and their denominations—are measured by the standard of White Protestant Christianity, is a profound force in American life. When Joseph Lieberman, a practicing Jew, was running as Al Gore’s Vice-President, Sen. John Breaux, a Democrat from Louisiana, when questioned about whether Lieberman’s Judaism was a factor, remarked: “I think people don’t care so much about where he goes to church on Sunday, but just that he has the moral values and principles to lead the country.” Apparently, Breaux thought Jews go to a “Jewish” church on Sunday.

Christian hegemony is also the ideology that draws sharp binaries between goods and evils: Letter and Spirit; Body and Soul; Acts and Faith; Women and Men. Spirit, soul, faith, and men are favored whereas letter, body, acts and women are denigrated. The next binary, or the one the includes all the others is Jew and Christian, and then Black and White. Christian hegemony, which is really White Christianity, underpins the ideology that leads to white supremacy, and it is built on the foundation of a belief that faith is more important than acts, that the spirit is more important than the letter. In essence, as Augustine put it, that the Jews are a carnal people.

It is important to say that there are non-White-hegemonic forms of Christianity which are liberationist and are fighting their own battle over what Christianity is, or should be.  (Thanks to Francisco Garcia for clarifying this for me.)

Am I then arguing that all Jews should be halakhic? That everybody should be punctilious in following Jewish law? While a Conservative rabbi, and personally observant, I am not here arguing that everybody needs to do that. I am arguing about the organizational positioning, rhetoric, aesthetics, and analysis of those who comprise the Jewish social justice movement. The Jewish analysis of an issue, through the lens of the accumulated Jewish wisdom and conceptual vocabulary of the last two thousand years or so, should be as important as other analyses. While the Jewish analyses will obviously be informed by a political analysis, the strategic and tactical response must be informed on both conceptual and tactical levels by a Jewish analysis that would take more than a sentence to articulate.

This approach will also strengthen the Jewish social justice movement. Facing the carceral system with an analysis which starts with the fact that Jewish tradition does not, on the whole, recognize punitive incarceration, and therefore proceeds from a position of restorative community based justice, is more powerful than a sign that says “Justice, justice you shall seek.” At the same time, as part of a virtuous cycle, the movement makes a strong claim on Jewish tradition, raising it up as articulating a specific liberatory vision.

To paraphrase Rev. Traci Blackmon, “These children are making Judaism in the streets. They don’t need our walls, they need our texts.”

6 thoughts on “Do the Good and the Just: An offering to the Jewish social justice movement”