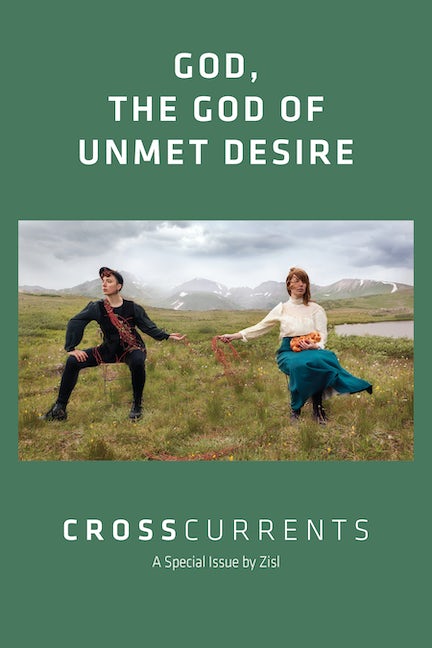 “Zisl” is the nom-de-plume of a writer, educator and organizer living in a major American city. They are an active leader in feminist, anti-racist, pro-Jewish work, and a somewhat traditionally observant and just-a-little-bit learned Jew. Zisl likes diaspora.

God, The God of Unmet Desire began in the depths of the first pandemic winter, when I reunited indoors with my parents for the first time in ten months. We had not been sure we would live to see that day, and when it came, it moved me to deep mourning and praise. I found an outlet for those feelings in daily davening and writing. I’m grateful for the opportunity to share two excerpts here on Jewschool, with you. Enjoy.

I am starved for intimacy, worn thin by the long, vigilant months whose watchword has been “distance.” Some mornings I wake up with a terrible ache in my chest, a lonely, echoing cavity that pins my limbs down to the bed. I lay there and recite the Moydeh Ani: I thank God for returning my soul (my breath) to me from my slumber which is one-sixtieth of death.

I get up. Like our priests of old, I raise my hands and pour a beaker of water over them, readying myself to utter God’s holy name. I thank God for making me a Jew. I go daven.

The black leather straps splayed across the back of my hand now spell out the letters Shin-Daled-Yud, biting one of God’s seven holiest names into my skin.

I move through the mantric rhythms of shacharis. I arrive at the Ashrey, recited three times every day, and it’s like greeting an old friend. Or rather, like coming home. The way you say “crystal clear” in Yiddish is “klor vi a yid in ashrey”—clear as a Jew davening Ashrey. There is a home inside these words and I share it with my people.

My mouth is filled by its rolling reysh’s and lamed’s. I touch the tefillin box on my left bicep—which also contains the name of God—and recite the first half of the verse, “poyseyakh es yodekho,” “You open Your hand.” Then, touching the tefillin on my head, I complete it, “u’masbia l’khol khai rotsoyn,” which is usually interpreted, “and provides every living being with [that which they] desire.” I sometimes read the Hebrew more directly, the way a mischievous old Hasid, a psychotherapist, once translated it: “and provides every living being with desire.”

One night the week before last, as I was quarantining alone, preparing to spend time indoors with my parents for the first time in many months, I felt a surge of crushing loneliness, followed closely by despair: the feeling that there was something maybe wrong with me, to have felt so lonely for so long. And then a little later, a soothing thought arose: How beautiful it is—how much you love being with other people! How beautiful, darling, your desire.

Tefillah teaches us to remember exile and yearn for redemption, to mourn our brokenness and beg for the Divine. It sharpens our thirst for God and (lehavdil) peoplehood. At its best, it fosters an incredibly generative sense of frisson, of contingent, precarious, glorious aliveness. Begging (within a healthy, playful dynamic) isn’t just hot. It’s creative possibility.

I am being a little fuzzy here, poetically comparing sex to, lehavdil, covenant to, lehavdil, political situation, partly because this is a new realm of thought and experience for me that I am still exploring. So let me be clear that to beg a a lover who cares for you, or levhadil a God who loves you and loves mercy is, lehavdil, very different from begging cruel, human regimes to tolerate or spare us or others. I don’t want to romanticize the suffering, isolation, and powerlessness that Jews and many, many others have often endured as a result of the world’s many exiles. I want to dip into the deep reservoir of resistance and creativity that Jews have built in partnership with God, despite those obstacles. I also am not presenting tefillah as a material tactic for defending Jews against antisemitism (although some Jews do see it this way, and they could be right). But I believe the erotic and spiritual life of tefillah could help us imagine and develop our theories and actions towards collective liberation.

Our traditional liturgy began from great yearning. It was fashioned by the rabbis in response to the devastating loss of God’s home, the Second Temple in Jerusalem, as a new locus—or rather, a decentralized, diasporic set of loci—for enacting Jewish life and peoplehood. Many Jews were broken or driven to violent fanaticism by the loss of the Temple. But the rabbis mourned, and longed, and faithfully remembered, and slowly built a new home out of words and ritual for God to meet Their people. A place that became a shared home for African Jews, and European Jews, and Asian Jews, and many, many others over the centuries—a home with many rooms, we might say, in consideration of the diversity of Jewish liturgies, but one home, which we all share—and it is one that can be built, transported, and rebuilt, without displacing non-Jewish neighbors (who have often been more powerful than us, anyway). Tefillah is the seed of many beginnings.

Zionism, in contrast, is an ending. It claims we are already redeemed (in part or in whole) by the establishment of the state of Israel. Right-wing Zionism in particular rejects our memory of exile as disgusting or shameful while belittling and denying the collective, exilic memory of Palestinians along with their basic human rights.  “Gamarnu!” it grotesquely shouts while presiding over the world’s largest open air-prison—We have arrived! And so there is little to long for and much to protect, no matter the cost to Palestinians.

Upward class mobility is also an ending. I have been in very poor Jewish shuls and in wealthier ones. In the destitute ones no one pretended to know the answers for fixing a broken world; they begged God for a sound roof over our heads, scolded one another when we did not make the minyan, and wept occasional tears of relief when we did. “We fight to keep warm,”[i] as the isolated, elderly Jews of Venice Beach once told Barbara Myerhoff of blessed memory; decades before they had met her, many of those Venice Beach elders had taken that fight to the streets, marching side by side with their siblings in the greater proletariat, but in their old age they had been largely abandoned by children, grandchildren, and Jewish institutions who considered them too poor and too embarrassingly Ashkenazi.

In all of the wealthier synagogues I’ve attended, whether Reform, Conservative, or Modern Orthodox, I have heard Shabbos sermons pronounced in the same individualist, moralizing mode, suggesting we each ought to fine-tune some particular character trait of ours. This will be, they seem to claim, the final perfection of an already basically decent world. While it’s very important to work on our individual characters, the problem is that these sermons seem to suggest that that’s all we have to do. They believe that the Jews have found sufficient security in America (or Israel); that with the rise of American liberal democracy, history has “ended”; and now we just need to smooth out the remaining rough bits. So they do not beg like the Jew who understands that they are but a beggar standing at the door of life, nor do they exult when they wake to see another dawn. Wealth has taught them to expect service and stability. They do not beg and they do not fight.