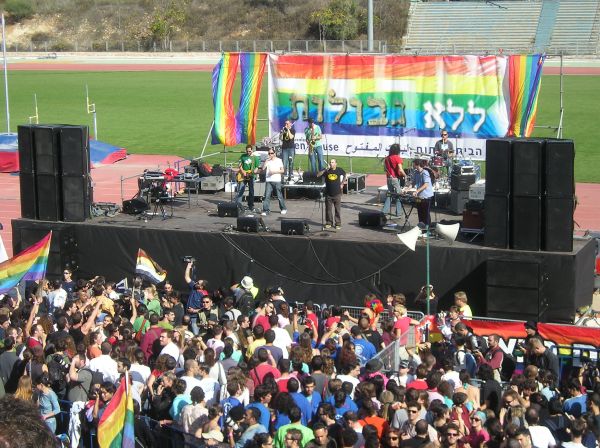 HaDag Nahash perform at today’s gay pride rally in Givat Ram
After weeks of ultra-Orthodox hate rhetoric and threats, Jerusalem’s GLBT community and its supporters held a peaceful “Pride” rally at the city’s Hebrew University Givat Ram Stadium on Friday afternoon. The somewhat secluded venue was a last-minute compromise between organizers and police in light of threats of violence from the city’s ultra-Orthodox community and a national terror alert related to events in Gaza.
More than 4,000 supporters attended the rally to urge increased tolerance in Judaism’s holiest city and human rights for all individuals. Secured by 3,000 police officers, the event’s subdued nature was due in part to ultra-Orthodox leaders calling on followers to read psalms at synagogues instead of attacking gays, as has been previously encouraged. Attendees filled a portion of the large sports stadium, waving a multitude of signs, banners and – of course – rainbow paraphernalia.
As with American “Pride” demonstration, representatives from a host of Leftist causes mixed with the crowd. Popular topics included peace with the Palestinians, an end to Orthodox homophobia, and rejection of militarism. Attendees were treated to performances by HaDag Nahash (“The Snakefish”), an internationally-known Israeli hip-hop band, as well as speeches from community and civil rights leaders.
Due to security threats and the last-minute venue change, rally attendance was less than expected, with police officers and journalists almost outnumbering participants. Though the original parade was cancelled and today’s rally took place far from downtown Jerusalem, Orthodox leaders nonetheless saw fit to condemn any display of tolerance and diversity. “If it was up to me, I would send the gay community to Sodom and Gomorrah,” Shas Chairman Eli Yishai told Israel Radio on Friday.
Visit Matt’s blog at mattlebovic.blogs.friendster.com.