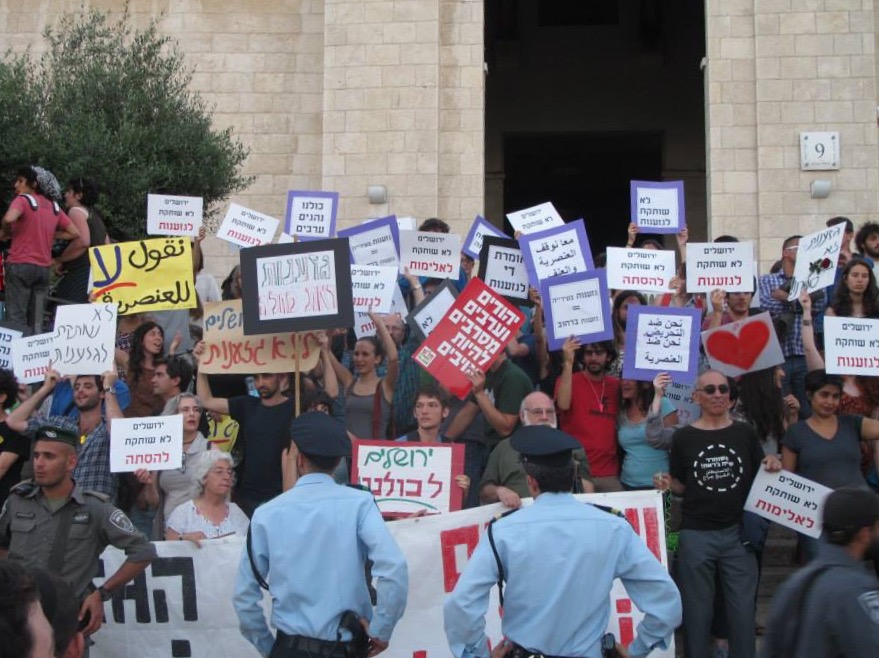 How I Stopped Celebrating Yom Yerushalayim

May 24, 2017May 4, 2018 by Yitz Landes
[pullquote align=right] In the spring of 2006, I was in twelfth grade.
[/pullquote]My first real memory of celebrating Yom Yerushalayim, Jerusalem Day, is also a memory of the last time that I celebrated the holiday.
In the spring of 2006, I was in twelfth grade. My Modern Orthodox high school arranged a “Poland Trip,” common in many North American day schools and post-high school gap year programs, and even more common in Israeli high schools. In its American iteration, these trips almost always include a trip to Israel immediately afterwards, as mine did, in keeping with the Zionist narrative of me-golah le-geualah, from exile to redemption, and me-shoah le-tequmah, from Holocaust to rebirth.
While I have since been convinced that taking high school students on such trips to Poland is ultimately detrimental, I can understand the perspective of an educator looking to squeeze in one last pill of Jewish identity, albeit a large one, before their students leave the orbit of well-funded Modern Orthodox institutions and set off into the wild world of secular college. Indeed, when I was in Poland, I appreciated the sensitivity of most of the teachers who came with us from our high school. Some of them clearly put quite a lot of thought into the trip. They emphasized that we were not only in Poland to see the scars of the Holocaust but also to learn about Jewish life in Europe before the war. The administrator in charge of the trip reminded us frequently that there was no correct way to react to what we were seeing.
[pullquote align=left] We joined the masses of Religious Zionist youth who were swarming towards the Old City.
[/pullquote]Our teachers’ values and pedagogical styles clearly clashed with those of the staff members who joined us from Israel — a seasoned (perhaps overly so) member of a Jerusalem-based educational program that organizes Poland trips for American students and a tour guide certified by Yad Vashem. Equipped with portable stereos and Israeli flags, these educators failed to connect with many members of my class. At Majdanek, the diasporists among us refused to adorn ourselves with Israeli flags as we walked through the camp. (Years later, I would learn from a friend that a certain Yad Vashem guide had told her that the most difficult Poland trip she had ever led was with a group from my high school, although I do not know for certain whether she was referring to the class of 2006.)
Despite our small rebellions, the trip was, by all accounts, relatively good. Given the preposterousness of sticking a large group of hormone-filled teenagers on a bus and hoping they would have the place of mind to address maturely the utter incomprehensibility of the Holocaust, we behaved well and cried on cue. Setting off from the airport in Poland, Israel-bound, we felt good. We had “done” the Holocaust thing and were now able to check it off our list and enjoy a few days in the Mediterranean sun.
Our late-night flight got us to Israel just in time for Yom Yerushalayim. After settling in to our hotel in West Jerusalem, we joined the masses of Religious Zionist youth who were swarming towards the Old City. We marched with them along the infamous path through the Arab shuk and down to the Kotel.
[pullquote align=right] I spent the following ten years in Israel.
[/pullquote]The implicit educational message was almost surprisingly simple: without much by way of explanation, we had gone, within twenty-four hours, from crying by the ovens in Auschwitz to dancing before the Wailing Wall. Perhaps because our experience was so theologically and politically charged, it went un-discussed. The Zionist hold on the Holocaust was so strong that it was the obvious conclusion that we were to reach. Despite the nuanced “no one way to respond to the Holocaust” outlook espoused to us in Poland, our teachers actually had a very specific response in mind, and it included partaking in some of the most offensive celebrations of the occupation.
Either because I sensed something was off or because it felt cool to bend the rules, I ducked out of the festivities early, taking a classmate along with me to meet some Israeli friends at a bohemian soup restaurant near the Old City.

I spent the following ten years in Israel. In 2007, it rained on Yom Yerushalayim. I avoided most of the holiday by spending the night in Tel Aviv and returned to Jerusalem late in the day to see groups of students in soaked t-shirts. I spent the following two Yom Yerushalayims in the army, after which I began to spend that day in anti-occupation demonstrations organized by left-wing activists and positioned along the route of the Religious Zionist marchers. With every year, the security detail surrounding the activists, protecting them from nationalist hooligans, has been forced to grow in size. At times, the security guards, thinking that I was planning on harming the activists, have tried to turn me away because of my kippa. In Jerusalem, religious symbols carry extra meaning; all the more so on Yom Yerushalayim. Never am I more ashamed to be a Jew than when my kippa signals danger.
[pullquote align=left] Triumphalist aspects of Jewish nationalism reach their maximum brazenness; even diehard Zionists are scandalized.
[/pullquote]Fifty years in, it certainly does not look like the occupation will end anytime soon. The innovations of the “Startup Nation” never cease to amaze as they proceed to fine tune the mechanisms of population control. Israel’s technological progress, hinging on the economy of the occupation, parallels both a growing ethno-nationalism and an ever-larger sense of despair in those who had hoped for a two-state solution. Yom Yerushalayim comes at the end of the cycle of Israel’s national holidays, structurally serving as its high point and marking a war whose outcome is deemed by many as nothing less than miraculous and as the fruition of thousands of years of Jewish longing. On this holiday, the triumphalist aspects of Jewish nationalism reach their maximum brazenness, so much so that even some diehard Zionists are scandalized. Yet the celebrations go on, and while dissent is voiced, it is from an area cordoned off from the celebrants by dozens of armed guards, and it comes from a population that is dwindling in size and influence.
Walking down the streets of the Arab shuk and hearing the taunts and jeers of Israeli youth was certainly one of the catalysts for my eventual move away from Religious Zionism. Returning to my twelfth-grade experience of Yom Yerushalayim, I think of the narratives that we tell and that we don’t tell, of what is said and what goes unsaid. I think of the homes and shops we marched by, owned by anonymous Palestinians whose stories we did not even think to hear, and of the way in which we obliviously let our own pain guide us down those streets.
As the occupation reaches its fiftieth anniversary, it is my hope that those of us in the diaspora can at the very least be more upfront about the baggage which we bring and which we impart on others when discussing the conflict, and that we can be open to hearing the voices of those who are suffering because of Israel’s actions.