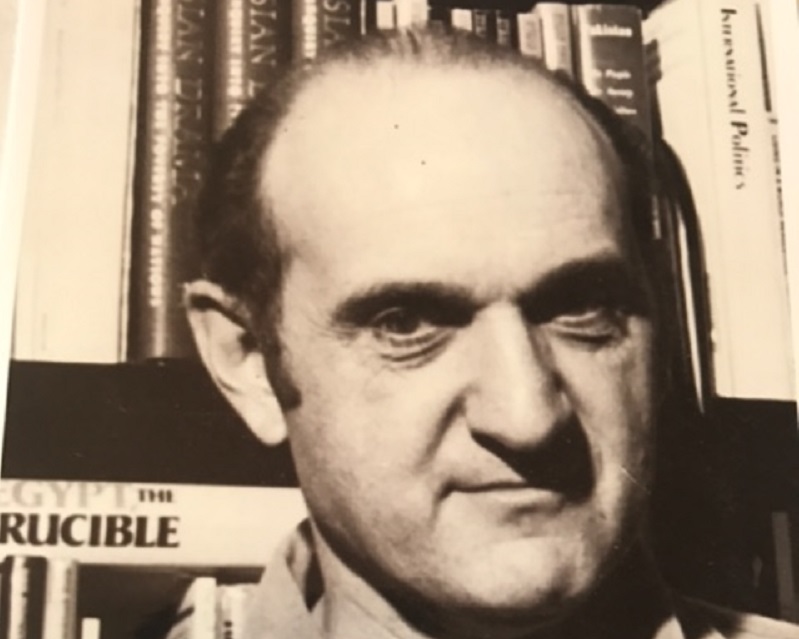 May 25, 2017May 4, 2018 by alizabecker
[pullquote align=right] This obituary was originally published by the American Jewish Peace Archive. Read an in-depth profile of him here.
[/pullquote]Dr. Don Peretz, a leading scholar of the Arab-Israeli conflict and Palestinian refugees at SUNY-Binghamton and a Jewish peace activist, died on April 29, 2017 in Mitchellville, Md. He was 94.
Long before the Israeli revisionists of the 1980s, Dr. Peretz wrote non-partisan accounts of the Arab-Israel conflict that were informed by years of primary research, balanced analysis, and empathy for both sides — works that have contributed to our understanding of the conflict and the Middle East in general.
Peretz retired as professor emeritus from SUNY-Binghamton in 1992. He started his teaching career there in 1966. He was the Director of the Southwest Asia North Africa Program and was the author of Israel and the Palestine Arabs, published in 1958, one of the first major academic studies of the 1948 Palestinian refugees. He authored 11 other books, among them, The Government and Politics of Israel, Intifada: The Palestinian Uprising,The Middle East Today, and Israel and the Palestine Arabs and over 300 articles for various journals, including Foreign Affairs and the Middle East Journal.
[pullquote align=left] In 1958 Peretz authored the first major academic study on the 1948 Palestinian refugees.
[/pullquote]Peretz was a fellow at the United States Institute of Peace and a contributor to the Middle East Institute. He graduated from the University of Minnesota (BA), and received his doctorate from Columbia University (MA, PhD). He was awarded a Ford Foundation grant to study the Arab refugee problem from 1952 to 1954.
Peretz was a member of the activist groups Jewish Peace Fellowship, the Committee on New Alternatives in the Middle East (CONAME), and Breira: A Project of Concern in Diaspora-Israel Relations. He was also involved in organizing Middle East peace delegations with the Fellowship of Reconciliation.
As a young man, Peretz became a conscientious objector to war, heralding a career in peace building. He was strongly influenced by a Quaker professor at Queens College in Flushing, NY and also by the Jewish chaplain at Columbia University, Rabbi Isadore Hoffman, an ardent supporter of Norman Thomas.
[pullquote align=right] “Thousands of them [Okinawans] were wounded during the American invasion,” Peretz recounted.
[/pullquote]Peretz studied Japanese at the University of Minnesota and served with the US Army as a non-arms bearing Japanese interpreter for a naval medical unit in Okinawa, mostly treating civilians. “Thousands of them [Okinawans] were wounded during the American invasion,” Peretz recounted. “Many of them had hidden in caves, and to get them out, the US Army used white phosphorous bombs.” The experience, he said, “only reinforced my opposition to the war and the impact that it had on noncombatants.” He was discharged after the Japanese surrender in 1945.
Soon after, Peretz went to Mandatory Palestine. He had become interested in the Palestinian issue, in part, because he came from a large extended Sephardic Jewish family in Jerusalem, and by his father’s and his own bi-nationalist humanistic Zionism. The language of his father’s family was Ladino. His father’s birth certificate stated he was born in 1894 in Jerusalem, province of Syria, Ottoman Empire. His paternal ancestors were expelled from Spain in 1492.
Peretz said, “I was much attracted by discussions about the possibilities of compromise in Palestine between Jews and Arabs focusing on bi-nationalism. The concept was supported by world-renowned philosopher Martin Buber and the President of the Hebrew University in Jerusalem, Dr. Judah Magnes. I decided to go to Palestine and see for myself what was happening in the country and to meet the bi-nationalists.”
[pullquote align=left] The day he arrived in Israel in 1946, the Irgun blew up the King David Hotel in Jerusalem.
[/pullquote]Using his G.I. Bill educational benefits, Peretz first enrolled in Hebrew University. The day he arrived in 1946, the Irgun blew up the King David Hotel in Jerusalem, the British administrative and military headquarters in Palestine, killing 100 people. Peretz recalled that “attempts were made to draft me into the Haganah, which became the basis of the Israeli army, but instead, I became a stringer for NBC news.” He ended up reporting on the Arab-Israeli conflict, which erupted in November 1947. He witnessed the mass exodus of the Palestinians who fled their homes in panic or were forced out by the Israeli army.
In 1949, Peretz applied to work with the American Friends Service Committee (Quakers), which the United Nations had selected to provide relief to the Palestinian refugees. He became head of relief work in the city of Acre and western Galilee. Peretz recounted that “some people in the Jewish community said, ‘How can a Jew be working for the Arabs like that?’ He responded, “There had to be accommodation between Jews and Arabs-especially within the borders, if there was ever to be peace.”
That was not his first experience in field humanitarian work. He had previously worked on a Quaker project in a Mexican village near Veracruz to control malaria and dysentery.
[pullquote align=right] “Some people in the Jewish community said, ‘How can a Jew be working for the Arabs like that?'”
[/pullquote]In the 1950s, Peretz accompanied American Socialist leader Norman Thomas on a Mideast tour to visit socialist party leaders throughout the region, with Peretz providing counsel on Jewish affairs. They inquired about the status of Jews in Arab countries wherever they went. They met various Arab leaders, including Egyptian President Gamal Abdel Nassar, from whom Peretz later received a Christmas card. Peretz thought it was rare for a Jew to receive a Christmas card from a Muslim.
Dr. Peretz was born in 1922 in Baltimore, MD to Haim Peretz and Josephine Lasser Peretz. He is survived by his wife of 38 years, Maya Peretz, a Holocaust child survivor, by his daughter Debbie Peretz (Marcus Brandt), and sons Jonathan Chance, and Ervin Peretz (Pauline Cooper), grandson Jonah, and cousins Edith and Hanan Schaham.
Rosemarie Esber was the lead writer of this obituary with assistance from Philip Mattar and Matthew C. Hogan.