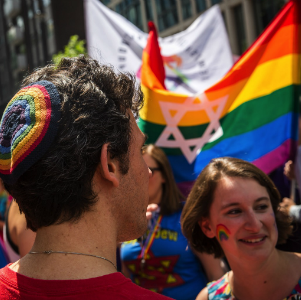 I’m a queer Jewish student. Is my acceptance in organized Jewish communities conditional?

Earlier this month, LGBTQ Jewish protesters working with Jewish Voice for Peace (JVP) disrupted the LGBTQ contingent of the Celebrate Israel parade in New York in order to protest the Occupation. The LGBTQ contingent in the parade included five LGBTQ Jewish groups, including Jewish Queer Youth (JQY), an organization that works to support LGBTQ Jewish young people, particularly those from Orthodox backgrounds. In response, numerous Jewish leaders, commentators, and organizations have condemned JVP for targeting young queer Jews; in an op-ed in the Forward, the executive director of JQY, Mordechai Leibowitz, asked, “What is a community for if not to protect its most vulnerable members?”
While the vocal support for young LGBTQ Jews is an important step toward inclusivity, unfortunately, such support hasn’t been universal in the past year. Last March, Hillel expelled B’nai Keshet, Ohio State University’s LGBTQ Jewish group, for co-sponsoring a Purim drag show fundraiser for LGBTQ refugees along with 15 other student groups, including Ohio State’s JVP chapter. In expelling B’nai Keshet, Hillel withdrew staff advising, funding, access to the Hillel building and kosher food from some of the most vulnerable members of the OSU Jewish community. Adhering to its Standards of Partnership for Israel Activities, Hillel also sent a message to LGBTQ Jewish students around the country that Hillel views them as disposable While numerous student-led activist groups have called on Hillel to re-admit B’nai Keshet, the institutional Jewish community has largely remained silent on this issue.
The institutional rejection of queer Jewish students is not limited to OSU. In August 2016, Hillel International announced a $22 million partnership with Mosaic United, an initiative led by Naftali Bennett, the Israeli Minister of Diaspora Affairs. Mosaic aims to combat the “the significant increase in critical discourse against Israel” and the “weakening of the Jewish foundations of the family unit.” Yet Bennett’s definition of the Jewish family unit is alarmingly limited–his party, the Jewish Home, opposes interfaith and same-sex marriages. This multi-million dollar initiative to strengthen the (heterosexual) Jewish family and stifle open discourse actively excludes students and community members based on their sexual orientation, religious background, and politics, among other things. Yet when Open Hillel and IfNotNow ask Hillel to stand with students against the Mosaic United, Hillel and other Jewish communal institutions are silent. What is this community for if it isn’t protecting its most vulnerable members, choosing instead to turn a blind eye when institutional power and money is involved?
That Jewish leaders stand in solidarity with queer Jewish youth only when they stand in opposition to leftist politics makes me question their authenticity. Before the Celebrate Israel parade, JQY had “hardly enough money to keep [its] Drop-In Center open.” That is, before JQY was placed directly in opposition to JVP, Jewish leaders and institutions were paying almost no attention to the only organization in New York that focuses on at-risk LGBTQ Jews from religious homes. The UJA-Federation of New York had over one billion dollars in net assets in 2015–keeping the JQY drop-in center running, and standing with LGBTQ Jewish youth is well within our Jewish communal means. Solidarity with religious LGBTQ young Jews is important, but we must ask ourselves: why just now?
Why do Jewish leaders denounce JVP in order to show their support for Jewish queer youth, but are unwilling to talk about Hillel’s failure to support similarly vulnerable populations — or provide the funds to adequately support organizations serving young queer Jews? Why are LGBTQ Jewish youth are only important when they’re in conflict with the left? These discrepancies show that Jewish institutional support for queer Jews is conditional on their adherence to the party line on Israel-Palestine. Red lines which exclude Jews from larger communities based on their politics, like Hillel International’s Standards of Partnership, continue to trump other expressions of solidarity. LGBTQ Jews marching in the Celebrate Israel parade are vulnerable community members for which the larger community must stand up––but only after they come into conflict with JVP. Queer students faced with Hillel International’s exclusionary policies and Naftali Bennett’s blatant homophobia are met with silence, and LGBTQ Jewish youth seeking counseling and support are largely ignored.
As a queer Jewish college student, I am troubled by these dynamics. Though the stated support of LGBT Jews is better than rejection, acceptance is only meaningful when it is consistent, not when it’s there to underline or undermine political agendas. When I want to act on my values as a Jew as much as I want to act on my values as a queer woman, will my community stand up for me? Do my rabbis, my lay leaders, my friends have my back? Only when Jewish communal institutions make the choice to support their LGBT constituents regardless of donor dynamics or communal politics can they truly say that they stand for their most vulnerable members.

Anna Fox is a rising junior at Wesleyan University, where she is in the College of Social Studies. She is an organizer with Open Hillel.