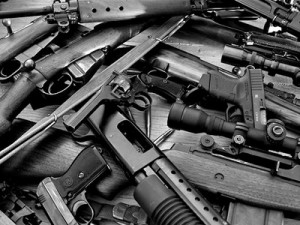 Is There a Jewish Position on Gun Control?

For the last couple of weeks, as the fallout from Newtown continues, as the NRA displays its absolute contempt for anyone who finds anything other than guns of value, Jews have also been participating in the conversation about gun control in the US.
While Jews tend toward the liberal positions about guns, Judaism does not, in reality, always correspond with American 21st century liberal politics. Does Judaism have a position on gun control? Rabbi Aaron Alexander of AJU’s Ziegler school, writes a commentary in HuffPo that, although it focuses on one aspect and one commentator that gets at the crux of the Jewish view.
There is simply no rational way of escaping the fact – not opinion- that gun ownership raises risks of death and injury for everyone in the house where the gun is owned. Nor is there any credible evidence that gun ownership deters crime or stops crimes in progress. Jewishly, significantly increasing safety risks to oneself without showing a significant benefit to offset it would require a ban on gun ownership.
Secondarily, hunting for sport, as Rabbi Landau says (the commentator that Alexander is writing about) is considered negatively by Jewish sources. Taking pleasure in something that causes pain is contrary to Jewish values. Even when we eat meat, we are required by Jewish law to slaughter it in a way that causes no pain to the animal (that is why an animal whose slaughter is performed with a knife that has even a single nick in it is considered treif). Arguments aside about whether or not such a death is truly painless (and there are certainly those who advocated vegetarianism – such as the gadol hador – the great one of his generation, Rabbi Soloveitchik), the value is clear: Jews are not supposed to engage in such behavior, except if there is no other option – in other words, one may stave off starvation by hunting, but it’s not something Jews should do if there are other sources of food.
Finally, it is worth knowing that the ban on Jewish hunting is not merely a halachic matter (matter of Jewish law) custom too has long viewed the hunter as a negative character. Those who make their living by killing are considered the very height of what my mother would have called “a goyishe kop” (please excuse, non-Jewish friends). If one looks through old haggadot, the wicked son, the rasha is often portrayed as a soldier or a hunter.
Sport hunting is not a value. Hunting for food – outside of a starvation case- is not a value. Safety for one’s family is a value, and the evidence is that having guns in the home not only does not protect one from intruders, but increases risks of accidental shootings, suicide deaths, and deliberate shootings, particularly in cases of domestic violence. Societally, then, there is one last case to be made. Many people argue that the case for owning guns is that the second amendment is determined to let us protect ourselves from a tyrannous government. God knows the Jews know from tyrannous governments.
To consider this rationally: does the possibility that a bunch of neighbors with assault weapons might gather together to fend off the United States government when it comes for us to send us to the camps balance out the overwhelming numbers of American gun deaths, and the evidence that very tight gun control, or even banning guns would reduce (not eliminate, of course, but reduce) gun deaths. That leaves us two questions actually. First, would those assault weapons stave off tanks, rockets and the very latest in military technology? Not likely. Second. If by some miracle there was a chance that it did, would it be worth it? I suppose that is a calculus that in general society could be argued, but Jewishly, I would say that the decisive view is no. The risks are too clear, and the protection far, far too little – if there is indeed any at all.

24 thoughts on “Is There a Jewish Position on Gun Control?”