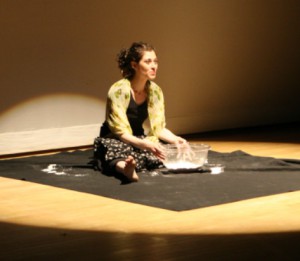 Language at Drisha (and beyond etc.)

Words are pretty cool. Sometimes they stay in one place, and sometimes they cross state lines. Sometimes certain types of words spread like wildfire. I don’t mean gossip; I mean words like “cat” or “bank.” For example, I was born in Connecticut, so I still say “pocketbook.” I brought “pocketbook” all the way down to Virginia, where my “pocketbook” encountered everyone else’s “purses.” It was barely a fight. I haven’t traded my “pocketbook” in for a “purse” yet, and it’s been years.
Still, in other environments, some words enjoy an almost guaranteed takeover. When I was at Drisha over the summer, nothing in the kitchen was free for the taking. Lots of things were hefker, though. “Ownerless.” It seemed that as the summer wore on, more and more things were hefker. And kal vachomer, if we were saying hefker we were definitely saying davka. Davka was thrown around like a baseball at Drisha. Once it showed up in our sugya, and once our gemara teacher started saying it, everyone in our class started saying it. Heikhi, how does this happen? Well, for one thing, our class wasn’t picking up much from Talmud 3 down the hall. Our class was together three and a half hours a day, and words tend to spread that way. I don’t know what the other classes talked about but we, Talmud 1, were learning ben sorer u’moreh, the rebellious son, and that’s where our vocabulary came from.
For that month, our life was the ben sorer u’moreh. Our jokes were ben sorer u’moreh-themed (maybe that was just me). On the last day of class, we bought OU Dairy bacon and grape juice, as an elaborate joke based on the fact that for someone to be a ben sorer u’moreh he must eat meat and drink wine…but only if he stole it from his parents first (both of whom must look and sound the same). We expanded this into a bigger joke, saying that his parents only owned one item, the clock in our own classroom. When the clock went missing one day, we said the ben sorer u’moreh had stolen it.
Drisha just worked like that. Most of the girls had just come from seminary, so it was an opportunity to re-enter an immersive “Torah everything” environment for them. But for people like me, this was a completely new concept. Of course you’re not going to ask if those donuts are free; you’re going to ask if they’re hefker.
I’m reading a book called Becoming Frum by Sarah Bunin Benor. It’s about the language of ba’alei teshuva; when, why, and how certain words or styles are acquired. Not surprisingly, her frumspeak hierarchy is: Periphery, Community, and Yeshiva. As BTs become more involved and invested, she explains, their way of speaking changes accordingly. This isn’t so surprising; after all, if everyone around you is using sav, eventually you will have to decide if sticking with tav is worth making you different. And vice versa. Some BTs enjoy emphasizing their differences from FFBs (she actually opens and closes the book with Matisyahu, naturally). Some want nothing more than to blend in.
It’s easy and linear when someone raised Modern Orthodox is joining a yeshivishe community. It’s a little more interesting to put people from secular, Reconstructionist, Conservative, Modern Orthodox, and Chasidishe backgrounds into a non-denominational place like Drisha. More than once did I respond to “Shabbat shalom” with “Good shabbos,” which violates all natural laws of language, seeing as I was raised far less observant than anyone else I knew there, and should have used “Shabbat shalom” like the child of secular Reform intermarriage I was. I didn’t start saying “Shabbat shalom,” but they didn’t have to start saying “Good shabbos,” either. Reading from Tanach was interesting. It didn’t default to Modern Orthodox/Israeli pronunciation as one might expect, but rather a mix. However, the exceptions prove the rule, as far as I’m concerned. Where “Good shabbos” didn’t bring us together, davka did instead.
It’s not limited to words, of course. When I read “the ‘hesitation click‘ is a feature of Orthodox communities,” I knew immediately what Benor meant, and I laughed. She writes that it is a feature of Israeli Hebrew, but as I hadn’t heard it until coming to Drisha, I thought it was just one person’s idiosyncrasy. It spread rapidly, though, and (as I delightfully noted) across denominational lines.
Drisha is one place where language isn’t necessarily correlated with ideological or denominational lines. It’s like its own microcosm.

5 thoughts on “Language at Drisha (and beyond etc.)”