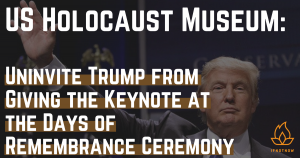 Jewish groups are reacting with surprise and dismay when it was announced a day ago that today, April 25th, Trump will speak at the Holocaust Memorial Museum in Washington, DC.
Two voices of objection that have issued parallel petitions are IfNotNow and Bend the Arc Jewish Action, both grassroots Jewish social justice groups that have become leading Jewish voices of resistance against the Trump administration.
IfNotNow member Jenna Bluestein bylined the group’s action alert yesterday, saying,

The decision to entrust President Trump — who has willingly invited antisemites and white nationalists into his inner circle — to lead our nation’s remembrance of the Holocaust is outrageous. The Trump White House traffics in the very kind of extreme nationalism espoused by those who carried out the Holocaust.
The Holocaust Museum cannot provide Trump with a chance to establish his moral credibility using the Holocaust. This is an affront to the dead, to the survivors, and their descendants.

And Rabbi Jason Kimmelman-Block of Bend the Arch Jewish Action wrote in theirs,

From his outrageous Holocaust Memorial Day statement, which intentionally erased the unique persecution and suffering of Jews at the hands of the Nazis, to his press secretary’s mindless and casual references to Nazi gas chambers, to his employment of unapologetic white nationalists like Steve Bannon and Sebastian Gorka — Trump and his allies have not earned the right to speak at this solemn ceremony.
Just as crucial, Trump’s demonization of immigrants and Muslims, his denigration of the press, his attacks on the judicial system and other actions that seek to undermine the institutions that protect our civil society, coupled with his ongoing admiration for authoritarian leaders, illustrate his failure to learn the painful lessons of the Shoah.