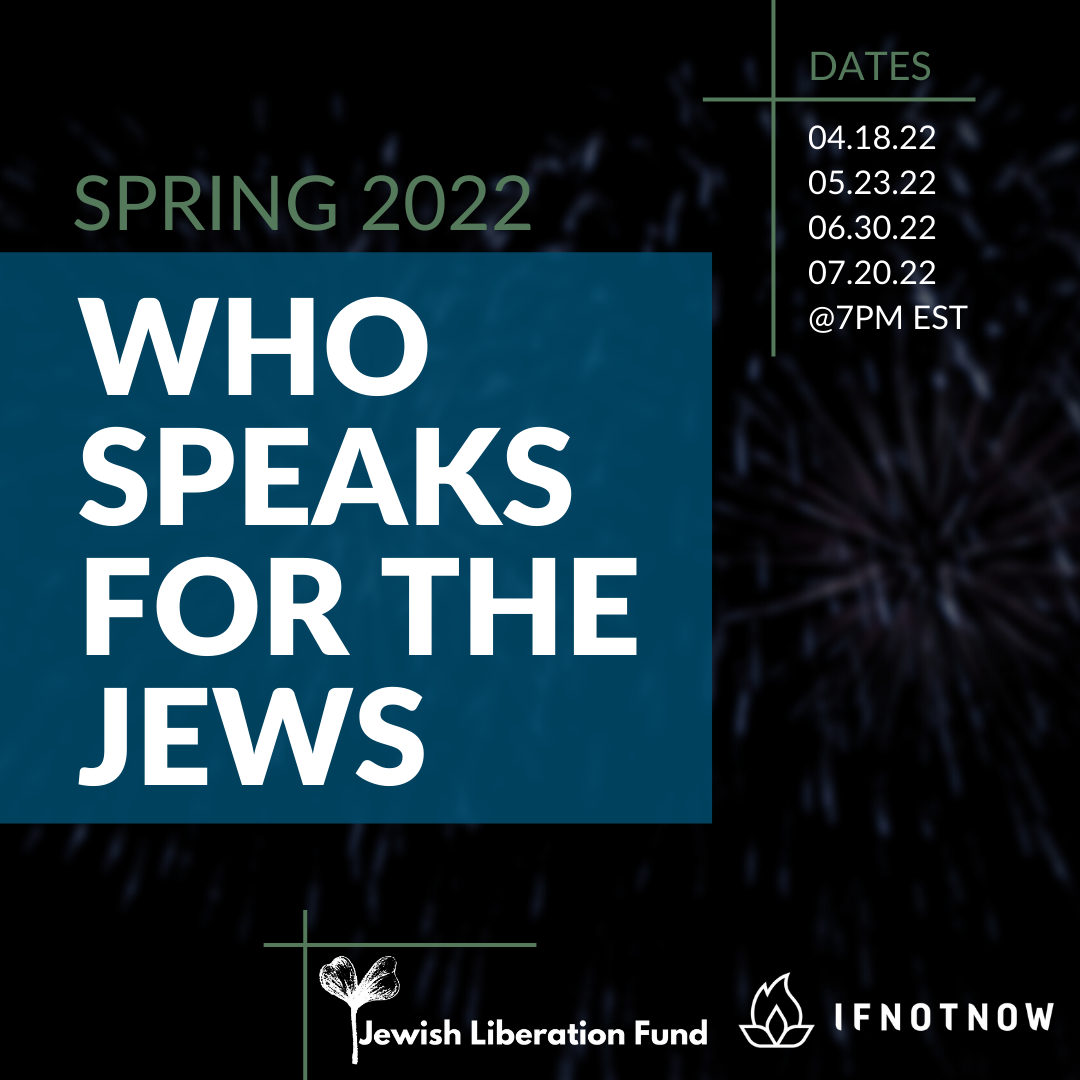 May 3, 2022May 3, 2022 by guestpost
The Jewish Liberation Fund and IfNotNow are sponsoring “Who Speaks for the Jews,” a deep dive into understanding the forces that shape American Jewish life. This speaker series will explore the impacts of under-discussed avenues of power that are often exercised on Jewish politics and communal discourse.
During our first session, Jewish Philanthropy and Why the Left Should Care, Professor Lila Corwin Berman delved into the American Jewish Philanthropic Complex, and shed some light on how Jews’ historical relationship with philanthropy was a contrivance by people interested in conservative, private-sector solutions to solution to social problems. Then, Anat Shenker-Osorio filled us in on the implications of philanthropic practice for progressive movement building! You can watch it here!
Over the course of the rest of this series, our awesome panelists will examine Jewish studies, antisemitism & the impact of philanthropy on public discourse, and Israel-Palestine, to unpack the way these forces act on and are acted upon within the Jewish community. Our third panel will be moderated by Jewish Currents. We hope to see you there!
The Jewish Liberation Fund is a vessel for you to fund a Jewish future you believe in. By cultivating the seeds of the progressive Jewish movement as a JOC-led grantmaker, educating large funders about the role power plays in philanthropic practice, and by organizing Jewish funders to take collective action, the Jewish Liberation Fund seeks to transform Jewish philanthropy from an institution that reinforces unjust social systems into one that works to break them down.
IfNotNow is a movement of American Jews organizing our community to end U.S. support for Israel’s apartheid system. We are a multi-generational movement with ancestors from around the world and Jewish backgrounds as diverse as the ways we practice our Judaism, backing the leadership of younger Jews and others historically on the margins of Jewish communal leadership to demand equality, justice, and a thriving future for all Palestinians and Israelis.
Register here!

Check out the incredible lineup of events and speakers below:

April 18th at 7pm ET: Jewish Philanthropy, and Why the Left Ought to Care,

with Lila Corwin Berman and Anat Shenker-Osorio
Organized Jewish life is highly dependent on philanthropic giving. Join Lila Corwin Berman and Anat Shenker-Osorio to dig into the history of Jewish philanthropy, how philanthropic decisions are made today, and the impact on Jewish progressive movement-building.
May 23rd at 7pm ET: Telling Stories with Data: Reclaiming the studies that shape Jewish communal narratives,
with Samira Mehta and Ari Kelman 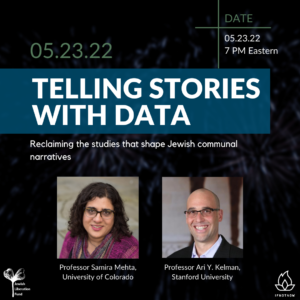 Samira Mehta and Ari Kelman will help unpack the numerous recent studies that seek to explain: Who are Jews and what do they care about? They will help us understand how the studies are funded, data is collected, and how this demographic data is used to advance projects, movements, and political causes that often exclude Jews of Color, queer Jews, and others at the margins of organized Jewish life.

June 30 at 7pm ET: Antisemitism, and the Impact of Philanthropy on Public Discourse, 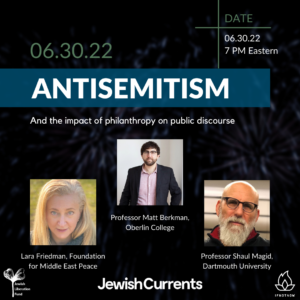 Discussions on antisemitism and its definition are highly contested ground. How does philanthropy impact this conversation? Join Matt Berkman, Shaul Magid, and Lara Friedman to unpack the forces shaping public discussion on antisemitism and the role of the Jewish philanthropic complex in Jewish political discourse. Co-sponsored by Jewish Currents.
July 20th at 7pm ET: Israel-Palestine and the future of Jewish Politics in America,
with Sarah Anne Minkin and Dov Waxman 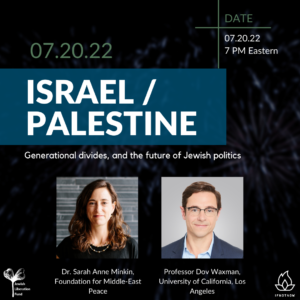 The relationship between Israel and American Jewry is changing, opening up new political possibilities and opportunities to contest for power within the American Jewish sphere. Join Sarah Anne Minkin and Dov Waxman to dig into the nature of this changing relationship, the impact on discourse around Israel-Palestine, where Jewish politics might be headed in the future, and what that means for the growing Jewish progressive movement.