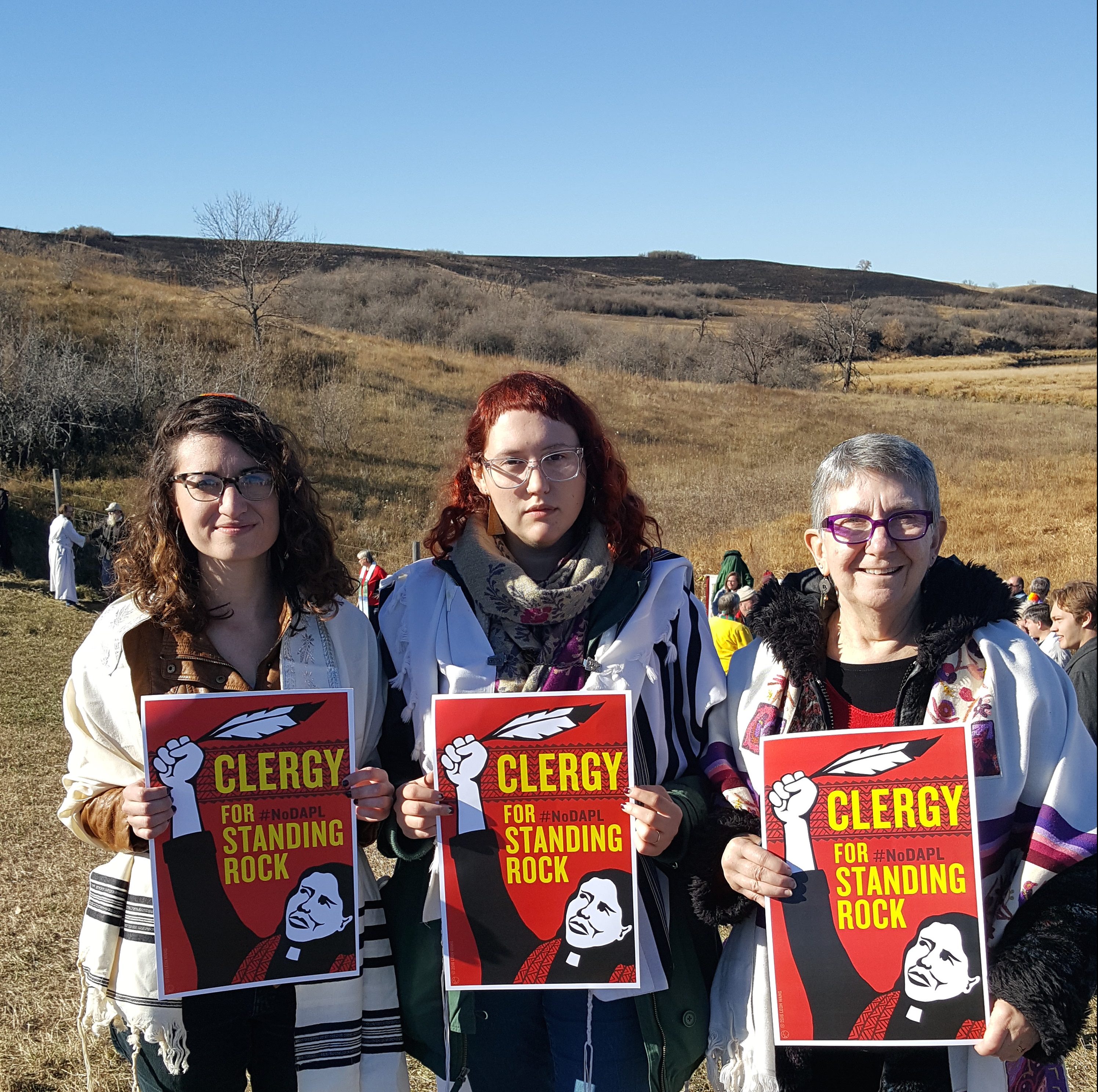 In a monumental victory, the Obama administration has denied the final permit for the Dakota Access Pipeline to cross under Lake Oahe in North Dakota on the Standing Rock reservation. Dallas Goldtooth of the Indigenous Environmental Network describes this success:

Straight up: WE MADE THIS HAPPEN. Our power is what changed the administration’s mind.
Walking in prayer
Hitting up the banks
Shutting down streets Locking down to machines Calling and mailing politicians Livestreaming Singing Protesting Protecting Defending And praying.
It all combined got us here…

Miriam Levia Grossman has been among the most prominent voices in the Jewish community for the #NODAPL movement. The rabbinical student expressed her congratulations through this prayer:

Barukh ata adonai elohenu melekh ha’olam, shehecheyanu, v’kiyimanu, v’higiyanu la’z’man ha’zeh.
Blessed is the Source of Life who has given us life, sustained us, and enabled us to reach this moment.
Blessed is the work of Native led resistance.
Blessed are the Water Protectors.
Blessed are the people who use their bodies, hearts and minds to build up a better world in solidarity.
Blessed is water.
#DefendtheSacred #WaterIsLife

Miriam also wrote: “…the fight isn’t over.” Indeed, advisers to President-elect Donald Trump have reportedly proposed to privatize Native American reservations that are rich in oil, gas, and coal. Energy Transfer Partners, the pipeline’s builders said they are still planning to build despite Sunday’s ruling. The struggle to resist DAPL continues.


In a November interview with Jewschool, Miriam described how she got involved in the #NODAPL movement and its significance for her as a Jew.
Miriam first became involved in indigenous issues in 2008. Her desire to act as an ally and accomplice for environmental and racial justice liberation movements led Miriam to an internship at the Tribal Historic Preservation Office on the Standing Rock Reservation while a college student. From this important branch of tribal government, she learned many things: how to support Native people in preserving oral histories and genealogies, how to support the work of reclaiming sacred native objects that had been stolen or poached, and how to help protect sacred sites including graves from desecration from development projects. She also made close friendships on the reservation and deepened her commitment to resisting environmental racism, colonialism, and police brutality.
Miriam’s words are important to consider for the “battles on the horizon.” Following are some lightly edited excerpts from her interview:

It is painful to watch people I care about being traumatized from physical, cultural, and spiritual violence. I grew up very close to my grandmother who was a survivor of a pogrom. She personally lived through what it meant for people and their bodies to be attacked but also for a people’s culture and heritage to be made invisible by the dominant group. I don’t bear the same burdens that my grandmother did. She could not often see beyond her own trauma. I have the ability to hold her story and to hear those of others and to hear the call for solidarity and say yes – all people’s liberations are bound up together. I act in her honor and in her memory and in honor of all of my ancestors whose graves have been decimated. I take action out of a sense of accountability and love for the people of Standing Rock but also out of accountability and love for my own ancestors.


When I lived on the Standing Rock Reservation, I found that a lot of people and their children knew about the Holocaust. I did not grow up with remotely as robust an understanding of the genocides on this continent and specifically of the Lakota people. It helped me to think about genocide at large and not only about my people’s own genocide.
Standing Rock is a movement rooted in prayer, and as a person of faith, I can’t sit idly by when people are being shot trying to protect graves and sacred sites. I think that all people of faith in this country ought to be concerned that people are being met with violence as they pray.
I was arrested while praying with other clergy in a nonviolent direct action in the North Dakota State House on November 3rd. I will be forever grateful to the folks from Jewish Voice for Peace who did jail support from the outside (including driving hours through North Dakota in the middle of the night to find where we were being held). While the experience was physically and psychologically challenging, I was not met with nearly the level of violence as the Water Protectors faced. (Water protectors are native people and allies who went to Standing Rock from around the world to protect the water.). I was handcuffed and the officer hurt my wrist and arm. Meanwhile, people in Standing Rock were met with rubber bullets. I was aware of the fact that my body and my prayers were, in many ways, seen as more worthy of protection than the bodies of indigenous people.
When I was arrested my tallit [prayers shawl] felt off and an officer grabbed it. I said, “This is a sacred object. I need to know that I can get it back.” The officer replied, “Yes, of course. I’ll hold it for you.” My heart sank because while the officer was kind to me, I realized that when indigenous people at Standing Rock are arrested, their sacred objects are often treated with violent disregard. Many truly sacred objects have been desecrated, confiscated, left on the side of the road, and destroyed when indigenous people have been arrested. And here an officer was keeping my tallit safe and let me fold and put it away with the rest of my things when I was booked. My colleagues Ariana Katz and Rabbi Linda Holtzman had similar experiences.

The discrepancy in how my body and my faith were treated as worthy of defense when so many native people have not been given that same right or courtesy is why this struggle is primarily about native rights and racial justice.
This is a moment when all people have to ask themselves what kind of ancestors we want to be for the people who will come after us. I want leave my future children and grandchildren with clean drinking water and with a livable planet and with a world that is less plagued by racism and fascist militarized policing. I want to be the kind of descendant of genocide who never sits silently by. So, I’m committing to fighting to work for that.
The way forward toward a healthy whole future is to come together under native leadership and to follow the call for solidarity that native people have put out in this moment and to listen be responsive as that evolves and changes and grows