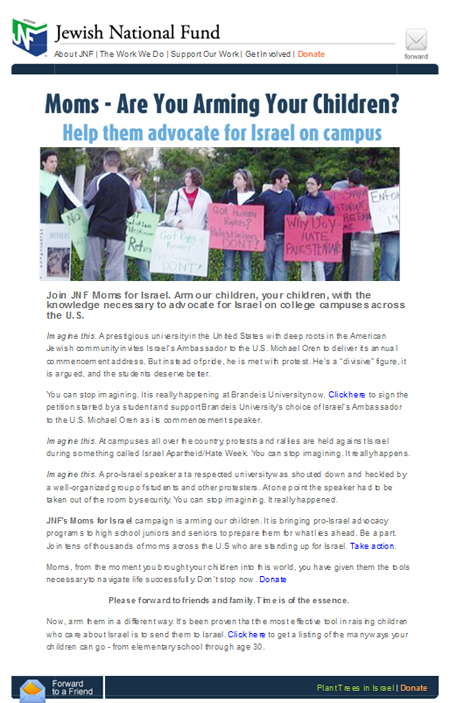 I’m writing this post because Peter Beinart took my song and dance of the past five years and dropped it like a non-existant Israeli nuke on the Ahmadinejad-like belligerence of the Jewish establishment. He said what I say, and I’m happy to watch its effects burn across the intertubes. Amen, hallelujah, selah.
So instead and speaking of establishment types, the Jewish National Fund is wading to suppliment The David Project and AIPAC on Campus as protectors of Jewish college students’ fragile links to Israel: “Moms – Are Your Arming Your Children?” The solicitation raises money for high school Israel advocacy training.
Let me get this straight: the land-holding authority of Israel, ostensibly marketed in the Diaspora as a guardian of Israeli environmentalism (hyuk), has a high school advocacy program? Why? First, this is obvious mission creep. The JNF offers no core competancy to the field of education or advocacy. Second, this program is horribly redundant. As if every other federation and major Jewish youth group doesn’t already have campus-focused activism training.
Indeed, this is what Peter Beinart wrote about: the community’s “don’t question Israel” message so poorly prepared young Jews for the reality of the conflict that their heads explode when they encounter the Palestinian side. Despite anti-Semitism on the left and real threats of Ahmadinejad, there is yet a core of blame to the Israeli-Palestinian that lies with Israel, Jews and American support. This core of truth, small as the right-wing thinks it is, so disrupts the spoon-fed comfort with the occupation that the result is ingrained distrust, distaste, and disinterest. Goodbye, organized Jewish community.
But this JNF clue offers us the bigger subtext of the Beinart peice, if you care to look. The establishment isn’t just right-wing and morally pegged to odious Israeli policies. It’s lost. It has no moral compass, no calling, no grand mission statement. Raising money to feed a bloated infrastructure dedicated to fighting yesterday’s battles is the only motivation it seems to offer us.
I regard the organized Jewish community with distrust, distaste and disinterest because I have values. Powerful, commanding, universal values that I feel come from Judaism, via my family. It’s a shame those universal values aren’t shared by the previous Jewish leadership.

16 thoughts on “JNF should read Peter Beinart, then disappear”