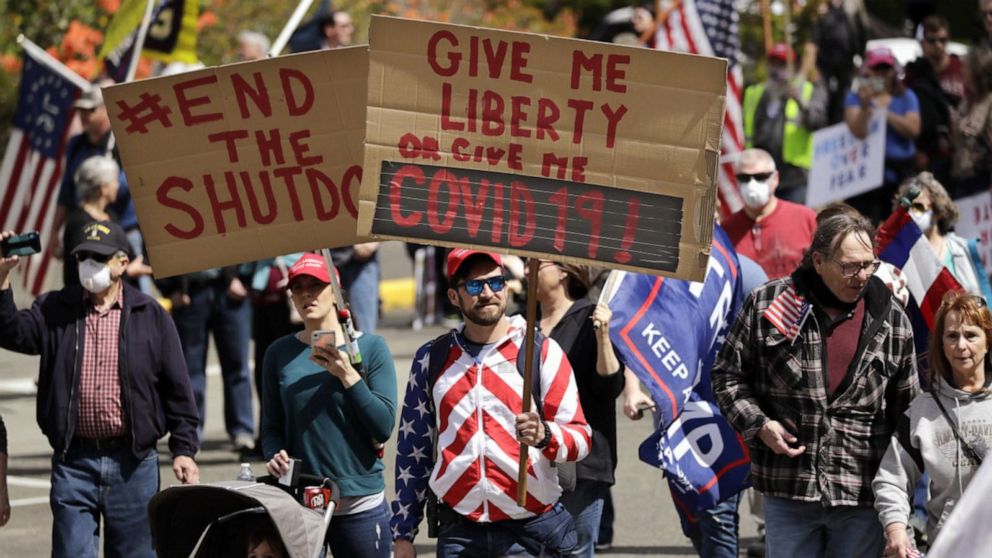 These past weeks witnessed protestors around the U.S. exercising their freedom of speech, their right to assemble and, in some states, their right to bear arms—but were they also demanding a freedom to kill not found in the U.S. constitution? Among the signs and slogans displayed by citizens in Michigan, Minnesota, Virginia, and by my own sleepy, coastal Southern Californian neighbors—“Live free or die,” “Let us work,” “I need a haircut,” “Freedom is essential,” “Give me liberty or give me death,” and the Exodus-themed “Let my people golf”—many alluded to a vague notion of freedom that raises some important questions about what it means to “live free.” (I won’t have time, here, to unpack the highly suggestive “Communists can’t surf.”) In theory, the law leaves room for us to opt out of seeking medical care, and in recent decades it even permitted us to take our own lives willingly. We are, it appears, free to die. Yet the law does not permit us to assist another in taking their life, and few would argue that our freedoms include a right to murder (outside of the circumstances of self-defense, when one’s own life is clearly and immediately threatened). Few believers—and many of the protestors were believers, affirming that God would protect them if allowed to work, pray, shop, golf, and get haircuts (“Jesus is my vaccine”)—would question the divine prohibition of murder that stands at the heart of most religious and secular law.

The biblical prohibition of murder also structures Lithuanian-Jewish-French philosopher Emmanuel Levinas’s musings on subjectivity and responsibility. Levinas’s ethical philosophy depicts the subject as constituted in her responsibility to the other; indeed, my responsibility to the other necessarily limits my own freedom. When I welcome the other, an act Levinas describes as the birth of moral consciousness, my freedom is called into question. “Morality begins,” he writes in Totality and Infinity, “when freedom, instead of being justified by itself, feels itself to be arbitrary and violent” (84). This is more radical than the liberal, American constitutional conventional wisdom that “my freedom ends where your freedom begins”: an idea that still understands the primary actors as autonomous individuals that choose to hurt others, or choose to refrain from doing so. Levinas, in contrast, privileges the other over the self, and understands ethical responsibility for the other to be primary, with freedom shown to be arbitrary and violent. In other words, I am constituted as a subject, as an ethical subject, in my response to and responsibility for the “face of the other,” that aspect of the other that prohibits the self from harming the other. “The face is exposed, menaced, as if inviting us to an act of violence. At the same time, the face is what forbids us to kill,” he explains in a series of interviews published in Ethics and Infinity. (86) “Thou shalt not kill,” for Levinas, the demand that issues from the other, structures not only all human relationships, it comes before its violent alternative: unfettered freedom.

Freedom, therefore, will always be limited in an ethical universe. Indeed, Levinas titled his book dedicated solely to Jewish themes Difficult Freedom, a reference to the law that structures Jewish life. As I write this, the Jewish community has just finished celebrating the holiday that commemorates our ancestors’ emancipation from slavery, Passover. Having been released from servitude, the newly liberated people traverses the desert, geographically and spiritually unmoored, until they receive the Torah seven weeks later at the foot of Mt. Sinai. You know the story. The defining spiritual moment of this historical tribe, the passive reception of divine law, structures and limits their freedom, but also gives them a way to live as free beings. They now have a way forward: “living free,” for the former slaves, will mean first and foremost a dedication to ethical life, a submission to prohibitions such as murder, and responsibility for others. This is not a freedom without conditions: each member of the community (“individual,” of course, is an anachronic concept) is necessarily bound by the law of the other—which is not to say that they will not constantly and repeatedly break these laws. Yet their collective redemption depends upon the acknowledgment of the primacy of the law of the other. To live completely “free,” then, to live in a wholly unfettered, unencumbered, irresponsible way, would bring about physical and spiritual death: their survival, in contrast, is predicated upon a difficult freedom.

The current crisis has only made more evident the interdependence of all human animals: the speed at which the virus travels from body to body has meant that in order for us to survive, we must temporarily hide from one another, we must shelter in place, forgoing “freedoms” such as haircuts, golf, and surfing. The vague notion of freedom invoked by protestors when they proclaim “Live free or die” might be slightly rephrased as “Live free; or, die,” where the “or” means “in other words.” If we live without restrictions, without laws, without a commitment to the well-being of others, we will surely die: spiritually or physically. The ancient Hebrews knew this.

Of course, they were terrible surfers.

One thought on “Live free; or, die”