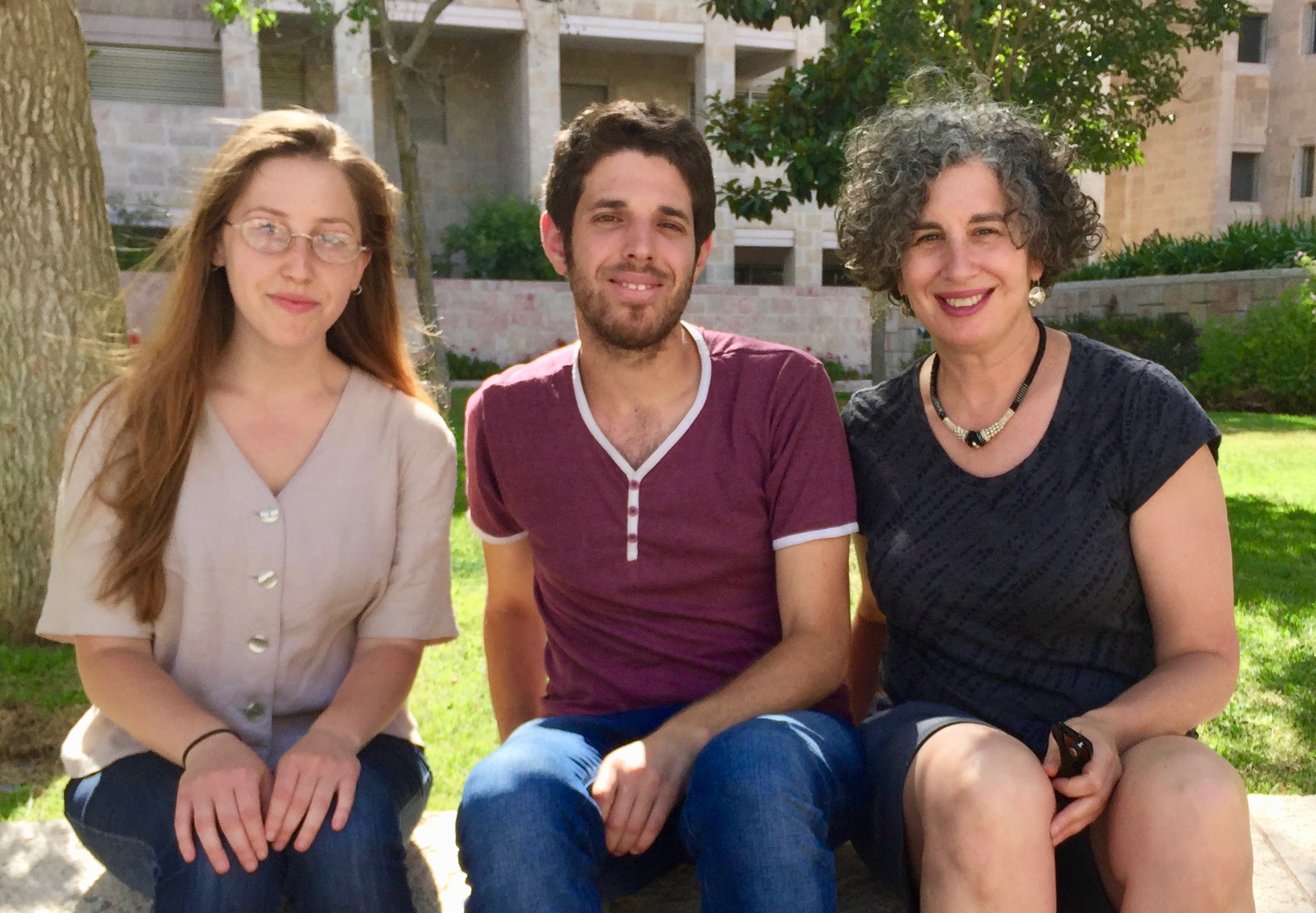 January 29, 2018May 4, 2018 by alizabecker
This piece was originally posted by the American Jewish Peace Archive. Photo is of Grace Gleason, Moran Zamir and Aliza Becker on May 30, 2017 in Jerusalem.
Moran Zamir is an Israeli activist with Combatants for Peace (CFP), a joint Jewish-Arab initiative founded in 2002, which brings together Israeli and Palestinian former combatants to do demonstrations and community education in an effort to non-violently end the occupation. In an interview with the American Jewish Peace Archive on May 30, 2017, Zamir talked about the traumas that have shaped his generation in Israel, how he came to be involved in this unique binational group, his conflicted feelings about the role of the U.S. in the region, and how American Jews can help to resolve the conflict.
Zamir grew up in the Negev on Kibbutz Lahav, a kibbutz his grandparents helped to found in 1952. His family saw themselves as Zionist pioneers building the nascent state of Israel, albeit on the remains of what had been a Palestinian village until 1949.
He described how memories of the Second Intifada (2001-2004) continue to impact the worldview of many Israelis, especially those of his generation who came of age in the early 2000s. In the 1990s, it appeared that peace was “just around the corner.” But frequent terrorist attacks and suicide bombings during the Intifada, like the killing of a young married couple by a Palestinian sniper just outside of Zamir’s kibbutz when he was thirteen, caused most Israelis to lose hope in the possibility of peace; it might be possible “50,100 years from now, but not now.”
Maybe 90% of young people my age,” says Zamir, “are really… desperate. They don’t have any hope for this place… that something could change.
At eighteen, Zamir began his mandatory military service in Givati, a field unit of combatants from predominantly poor and working class backgrounds. Israelis spoke of Givati as “fresh flesh that you send to die first.” Zamir could have served in an elite army unit like his father and grandfather had done, but instead he requested to serve in a unit considered undesirable to people from his background in order to fight side by side with people from a broad spectrum of Israeli society.An encounter in the Gaza Strip was a critical turning point in Zamir’s understanding of the conflict.
After his unit entered the small village of Rafach, all of the residents fled on foot — save one man, who couldn’t leave because he was disabled. When the Israel Defense Forces (IDF) soldiers entered the man’s home, they found him sitting on the living room couch. He looked directly at them and said in fluent Hebrew with no fear in his eyes, “I want to tell you my story.”
He looked at Zamir and the other soldiers and said, “So tell me, where should I go? Where can I go? Tell me. You don’t want me here, you don’t want me there.”
He told them about how in Israel he had worked in agriculture for more than ten years, married a Palestinian woman with Israeli citizenship, and had several children. But when the Intifada started, he was sent back to Gaza. He hadn’t seen his family since. Three years prior while working in his garden, an Israeli military drone dropped a bomb which blew off his leg.
Even as he had started seriously doubting the rationale for his service, Zamir remained committed to completing his mandatory three years. Similar to many other liberal Israelis, Zamir’s family considered themselves to be left wing on peace, but military service was “beyond politics.” Their basic belief is that that the Jews are “in the right” since the Palestinians are trying to kick them out and “we have to be strong and stay.”  Army service was also an important rite of passage, especially for men, that Zamir didn’t believe he could avoid.


While a student, Zamir attended an alternative Memorial Day service organized by CFP. “I didn’t know anyone there,” he said. The service was a radical departure from the traditional Israeli Memorial Day he had known previously, which glorified the sacrifice of soldiers who “died for us” in a day many secular Israelis view as “practically the holiest day of the year.” At the CFP service, Israelis and Palestinians together remembered their loved ones who had died in the conflict. In contrast to the implicit message of the traditional Yom HaZikaron — that young Israelis would be honored to sacrifice their lives for their country — the message of the binational Memorial Day touched him deeply: “Enough! It’s time to stop the violence.” Following the service, Zamir decided that he couldn’t live in Israel without being politically involved to end the occupation, so, he joined CFP.
Subsequently, Zamir moved to Jerusalem to avoid what he calls “the Tel Aviv bubble.” Even though he lived only a 30 minute drive from the West Bank, in Tel Aviv it often felt like “the occupation was happening in China or someplace far away. In Jerusalem you can’t have this feeling. You just can’t. It’s right here.”
Zamir has been active with CFP in helping rebuild a demolished Palestinian village in the Jordan Valley and co-leading house meetings and school presentations. His work is always in partnership with Palestinian CFP members. The organization is unique in that it is binational; Israelis and Palestinians do everything in collaboration.There are challenges within CFP, many of them stemming from cultural and linguistic differences. But Zamir finds it very powerful to work together through even the deepest fears and resentments toward a shared goal, and demonstrate to others how it’s possible. “I think that we created this mess together, and we need to finish it together.”
As an Israeli left wing activist, Zamir feels that he has a complicated relationship with America and American Jews. America supplies “the weapons to the IDF and makes a lot of money off supporting the occupation. However, he is very appreciative of those American Jews who come to Israel in solidarity with CFP’s anti-occupation efforts.
Zamir finds himself surprised that Americans would care about what is happening “here on the other side of the ocean when you have so much trouble in the U.S. with Trump.”
“We need the support,” he says. “I’m happy that [Americans] want to help us, but maybe not out front.” As a man, he said, he wouldn’t put himself out front in the feminist movement. “I would help them, support them.” Similarly, he believes that Israelis and Palestinians need to lead this struggle within their own societies in a “language” their communities can understand.
He asks that Americans, even if they consider themselves learned about the conflict, not come to Israel with the presumption that they know it all, “because it’s not a healthy perspective.” It’s better to come here with an open mind “without thinking that you already know what is the right thing to do.”
Zamir also related how he, a secular Israeli raised on a kibbutz known for its pigs, finds personal and spiritual inspiration for his activism from American Jewish leaders like Rabbi Abraham Joshua Heschel. The manner in which Heschel connects Judaism to the struggle for peace and human rights helps keep the fires of hope burning on the Israeli left according to Zamir. This inspiration is “something that’s very important.”
***
This is the eighth in the American Jewish Peace Archive series of profiles of Israeli peace activists, based on interviews about the relationship between American Jewish and Israeli peace activism.